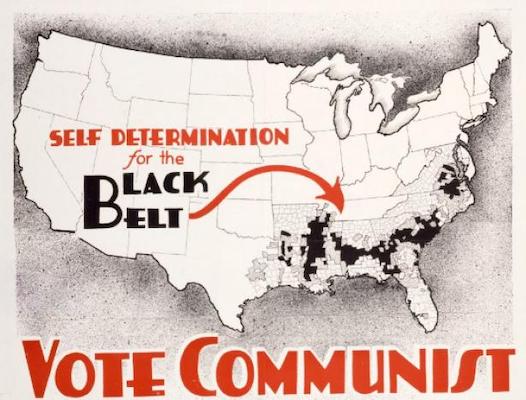 The Black Liberation Movement in the United States has reached an almost unprecedented level of ideological confusion. Unlike in the 20th century, significant sections of the contemporary Black Left openly embrace an understanding of ‘identity politics’1 that is based in philosophical idealism.2 A somewhat resurgent U.S. Left has, correctly, begun to critique these perceived political errors. Unfortunately, social democrats such as DSA, Jacobin and Cedric Johnson in his award-winning article3 add to the ideological confusion. This essay asserts that contrary to the claims of advancing democracy and freedom, social democracy has consistently undermined the struggle for national liberation and socialism.

In 1896, Eduard Bernstein, the leading theoretician of social democracy,4 wrote that the 2nd or Socialist International5 should adopt a pro-colonial policy. Under the banner of social democracy, Bernstein boldly proclaimed through colonialism the “savage races” can be “compelled to conform with the rules of higher civilization.”6 Fortunately, other, more principled socialists won the debate and the 2nd international officially espoused an anti-colonial position.7 Although this isn’t the first time that Western ‘radicals’ have betrayed colonized people,8 several leaders such as Vladimir Lenin, leader of the Russian Revolution, saw this as a complete betrayal of the ‘national question’ and international socialism.9

Lenin theorized that in the late 19th century, capitalism entered a new phase that he referred to as imperialism or monopoly capitalism.10 Under imperialism, “capitalists can devote apart of these super profits to bribe their own workers to create something like an alliance between the workers of the given nation and their capitalists against the other countries.”11 In short, the capitalists use their extreme profits to create an aristocracy of labor in North America and Europe who sellout and look down upon workers in the global south. By the start of WWI, the process was complete: the Social Democratic Party of Germany and others had rejected their anti-colonial positions and voted to enter the war on the side of their own national capitalist class.12 In one of his most influential works, Lenin clearly demonstrated WWI was fundamentally a war to determine which colonizer would control what part of the world. He called these opportunistic social democrats, “social imperialists, that is, socialists in word but imperialists in deed.”13

A year before Lenin’s seminal work, WEB Du Bois in the “African Roots of War” contends that the African continent was the ‘prime cause’ of WWI. Similar to Lenin, Du Bois states:

the white workingman has been asked to share the spoils of exploiting ‘chinks and niggers.’ It is no longer simply merchant prince, or the aristocratic monopoly, or even the employing class, that is exploiting the world: it is the nation; a new democratic union composed of capital and labor.14

According to Du Bois, white workers condoning, if not outright, support for lynching, legal segregation, poll taxes, and racist politicians had a material basis in the imperialist system. Dubois claimed that African America was a semi-colony15 with, more in common with other Black and colonized people in the rest of the world than U.S. white workers. Preceding Kwame Ture and Charles Hamilton’s call by thirty years,16 Du Bois believed Black people must practice a form of voluntary segregation17 for at least a short period, then, unite with white workers. To be clear, like all the theorists discussed in this essay, Du Bois believed that the primary motivations for colonialism were economic.

In the early 20th century, the Socialist Party of America (SPA) began to accept the reformist, racist conclusions of Bernstein’s social democratic opportunism. Hubert Harrison, one of the leading Black organizers in the SPA, opposed ‘evolutionary socialism’ and the explicitly racist voices in the party. For instance, Victor Weyland, editor of the largest and most influential SPA publication, was a strict segregationist.18 On the so-called Left of the party, Eugene Debs, the most well-known socialists U.S. politician, said ‘class struggle was colorless’ and “we have nothing special to offer the Negro.”19 After resigning from the SPA and moving to Harlem, NY, Harrison wrote “We say Race First, because you have all along insisted on Race First and class after when you didn’t need our help.”20 Using a materialist analysis, he concluded the racism of white workers makes independent Black organizing a political necessity. In 1924, prior to the Communist International or Comintern,21 Harrison founded the International Colored Unity League. Demonstrating clarity on the national question, a central objective of the ICLU was the creation of a “Negro State.”22

Harry Haywood was a leading theoretician of the “National Question”23 in the Comintern. Haywood began organizing as a member of the African Blood Brotherhood, an underground, Black Nationalist and Socialist organization founded in 1919.24 In 1928, at the 6th Congress of the 3rd International or Comintern Haywood successfully lobbied for the adoption of the Black Belt Thesis.25 The BBT asserts Black America, particularly in the American South, constitutes an oppressed nation with a right to self-determination.26 Comintern’s line rejected the social imperialism of the 2nd International and accepted the revolutionary potential of the Black Liberation Movement in the fight to end imperialism. While social democrats claim nationalism homogenizes whole groups of people, Haywood showed that Black National Consciousness was, to a large extent, a product of class struggle.27

Although it is often portrayed as narrow nationalist, the Black Power Movement (BPM) was, in fact, an international phenomenon.28 One example of the global scope of the movement was Marxist and Black Power advocate Walter Rodney. Rodney was an academic and organizer in the U.S., Canada, Caribbean, and Africa. Rodney, along with several U.S. Black Power organizers, participated in the debates on race and class leading up to the pivotal 6th Pan African Congress in Tanzania.29 While Great Society programs had some influence on Black Power leadership as Johnson claims,30 they were primarily influenced and shaped by the Pan Africanist, Third Worldist, and Socialist movements that were prominent during the era. The Black Power Movement was a continuation of the Old Left’s ‘national question’ and a domestic expression of the post-WWII national liberation movements.31

A. Philip Randolph and Bayard Rustin are two examples of the moderating, anticommunist, and social imperialist politics that the BPM rejected. For example, during the anti-communist Red Scare both of these ‘Leftists’ actively worked to distance and isolate fellow travelers and communists party members from mainstream civil rights organizations.32 Rustin even advised the USA against supporting liberation movements in Africa because they had communist leadership.33 By the 1960s, Rustin argued that Black people should move away from militant, mass movement politics and instead enter the imperialist Democratic party.34 On the other hand, the radical sectors of the BPM advocated for an anti-imperialist, socialist politics in solidarity with revolutionary movements in Cuba, Vietnam, Mozambique, Angola, and China.

Rustin’s similarity to Bernstein’s revisionist ‘evolutionary socialism’ sixty years earlier is glaringly evident as is the BPM’s Leninist revolutionary influences. Contrary to Johnson’s assertions, it was following Rustin’s strategy of electoral politics that facilitated the transition of Black America from domestic colonialism to a form of domestic neo-colonialism.35

While Johnson and others are correct to critique the idealist, liberal politics emanating from some quarters of the Black “Left,” they ultimately add to the ideological confusion by stating we should “support Democratic candidates in specific locales.”36 This a continuation of the revisionism of Bernstein, Browder37, Rustin, Bernie Sanders38, and other social democrats who promote reformism and social imperialism. A word to the Millennial and Gen Z Left: what historically distinguishes the U.S. Black Left is our position on anti-imperialism and the ‘national question.’ That is one of the main reasons why DSA, even after a surge in membership, remains, a disproportionally white, middle-class organization.39 Our generational mission [ xl] is clear: To build a revolutionary, Pan-African working-class organization and unite with the international working class.

Down with Social Democracy!

Izwe Lethu I Afrika! (Africa is Our Land)

Economic Freedom in Our Lifetime!

(and last, but certainly not least,)

Benjamin Woods is an organizer in Washington D.C. He is originally from Oklahoma City, Oklahoma.