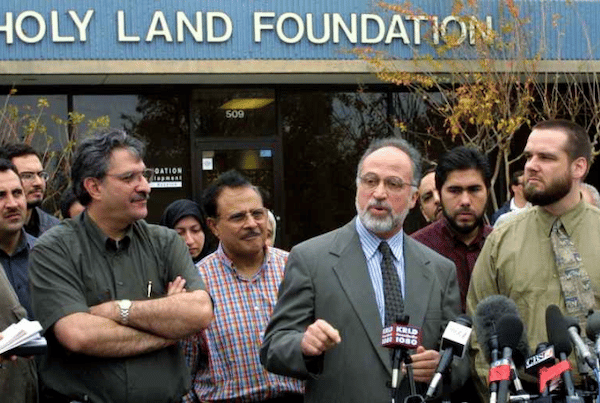 America’s destructive wars on Muslim countries launched in the wake of 9/11 under the misplaced rubric known notoriously as “War On Terror” (WoT), spawned mindless death and bloodshed on an unprecedented scale.

In a gross display of raw power, America shamelessly sought to demonstrate its unchallenged position as a military superpower to refashion the world in its image.

Since the unmistakable target of U.S. belligerence was Islam and Muslims, it adopted a well-worn Israeli strategy by dehumanizing victims as “terrorists”. The tactic was designed to fool the world by claiming that the war was not on “good Muslims” but only the “bad ones” depicted as “terrorists”.

Against this background, one is reminded of the extent of maliciousness associated with the WoT paradigm and the abuse of justice flowing therefrom.

A classic example in this regard is the case of what became known as the “Holy Land Foundation 5”.

They have been described as the “Holy Land 5” who were actively involved in the Holy Land Foundation (HLF)based in Texas.

The HLF was at the time, the largest Muslim welfare and charity organization in the U.S. until it was singled out and hounded by the Bush administration and Israeli forces.

Using the cover of the WoT, and fuelled by hostile Zionist agencies who profiled the HLF as a “nest of terror”, it was shut down in December 2001 by U.S. authorities.

The two others, Abdulrahman Odeh and Mohammed El-Mezain, sentenced to 15 years each, were released in 2020 and 2022 respectively.

An intriguing yet deplorable aspect of the highly politically-charged case is the fact that these men were convicted on false charges of “providing material support to terrorism,” despite the fact that they were never even accused of funding the legitimate armed resistance to Israeli occupation and colonization.

In other words, the criteria for aiding or funding “terrorism” ought to have been applicable to the International Red Cross and USAID, rendering them “guilty” as well.

However, as is known, the Holy Land Foundation was selectively targeted and borne out by the fact that after failing to convict the HLF5 in their first attempt, the U.S. judiciary allowed untested “evidence” by an anonymous Israeli intelligence agent.

The “War on Terror” has and remains a playbook on how to subvert justice to gain political goals. The dubious, torture-produced “evidence” by a faceless Israeli spook against the HLF5 was typical sensationalism and anti-Palestinian bigotry.

Though the subversion of American politics by Israel is a well-known documented fact, it cannot remain unchallenged. By the same token, the ill-conceived path of destruction known as the WoT needs to be derailed and its perpetrators brought to justice.

And the case of the three men who remain behind bars, deserve a global campaign to secure their freedom.

Iqbal Jassat is an Executive Member of the South Africa-based Media Review Network. He contributed this article to The Palestine Chronicle.