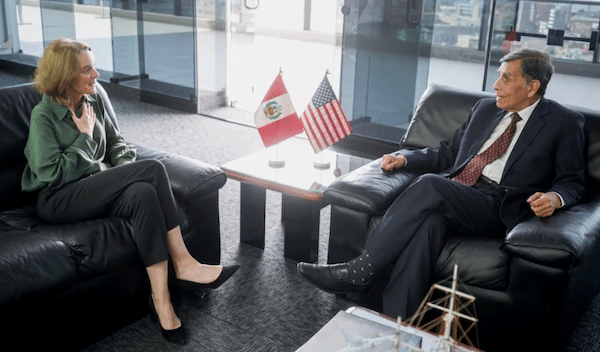 Ex CIA agent and US ambassador to Peru, Lisa Kenna, meets with its defense minister two days before a coup against its elected left-wing President Castillo

The U.S. ambassador in Peru, a veteran CIA agent named Lisa Kenna, met with the country’s defense minister just one day before democratically elected left-wing President Pedro Castillo was overthrown in a coup d’etat and imprisoned without trial.

The coup set off mass protests all across Peru. The unelected regime has unleashed brutal violence, and police have killed numerous demonstrators.

Meanwhile, the U.S. government has staunchly supported Peru’s unelected coup regime, which declared a nation-wide “state of emergency” and deployed the military to the streets in an attempt to crush the protests.

The CIA has organized many coups against democratically elected left-wing leaders in Latin America, from Guatemala’s President Jacobo Árbenz in 1954 to Chile’s President Salvador Allende in 1973.

When the Donald Trump administrated nominated Lisa Kenna to be ambassador to Peru in 2020, the State Department released a “certificate of competency” that revealed that,

Before joining the Foreign Service, she served for nine years as a Central Intelligence Agency officer.

This important fact is curiously absent from most of Kenna’s bios, including her page on the US embassy’s official website.

Under Trump, Kenna also served as executive secretary of the State Department and was “senior aide” to Trump’s Secretary of State Mike Pompeo, who previously headed the CIA.

In regard to his work for the notorious spy agency, Pompeo admitted in 2019,

I was the CIA director. We lied, we cheated, we stole. We had entire training courses.

At a Congressional nomination hearing in 2020, Kenna admitted that, as executive secretary, she saw “nearly all” of the memos that were sent to Pompeo, adding, “I am aware of the vast majority of” calls made to and by him.

When President Joe Biden entered in January 2021, he kept Kenna as ambassador in Peru.

The current US Ambassador in Peru. pic.twitter.com/iUAbnR6Hzp

On December 6, 2022, Kenna met with Gustavo Bobbio Rosas, a retired brigadier general from the Peruvian military who had officially been appointed as defense minister the day before. (A local media outlet reported that the meeting was on December 5, but that appears to have been an error.)

Peru’s Ministry of Defense published a photo of their friendly chat.

At the time of this meeting, it was known in Peru that the notoriously corrupt, oligarch-controlled congress was preparing for a new vote to overthrow democratically elected left-wing President Pedro Castillo.

Article 113 of Peru’s constitution allows the unicameral congress to remove presidents simply by voting to declare that they have a “moral incapacity,” in a process known as “vacancy.”

Fuerza Popular is run by the family members of Alberto Fujimori, the far-right dictator who ruled Peru with an iron fist from 1990 until 2000. With the support of the U.S. government, Fujimori committed genocide, sterilizing approximately 300,000 Indigenous people, while killing, torturing, and disappearing large numbers of leftist dissidents.

The Mamanivideos scandal showed that it is quite easy for Peru’s rich oligarchs to buy votes in congress to overthrow democratically elected presidents.

And as soon as Castillo entered office on July 28, 2021, the congress tried to do exactly this.

Just one day after the U.S. ambassador met with Peru’s defense minister, on December 7, 2022, the right-wing-dominated congress launched a parliamentary coup against Castillo, using article 113.

This was the third coup attempt in just over a year by Peru’s congress, which in September 2022 had a mere 7% approval rating.

Hoping to stop the coup, Castillo responded by trying to dissolve the congress. This is allowed in cases of obstructionism by article 134 of Peru’s constitution.

Defense Minister Bobbio immediately denounced the president’s actions. He published a video resigning from his position (that he had only held for three days).

In the video, Bobbio told Peru’s armed forces not to support President Castillo and to oppose his attempt to dissolve the coup-plotting congress.

Bobbio claimed Castillo was launching a “coup attempt,” but in reality Bobbio was instructing the Peruvian military to support a coup against the democratically elected president, on behalf of a notoriously corrupt oligarch-controlled congress that had almost no support from the population.

While Bobbio ordered the military to rebel against the president, the U.S. government promptly attacked Castillo.

The United States categorically rejects any extra-constitutional act by President Castillo to prevent the congress from fulfilling its mandate.

Kenna failed to mention article 134 of Peru’s constitution, which states:

The President of the Republic is authorized the dissolve the Congress if it has censured or denied its confidence to two Councils of Ministers [the official name of Peru’s cabinet]. The dissolution decree contains the call for elections for a new Congress.

When Castillo moved to dissolve the congress, he cited article 134 and he made it clear that it was only going to be a “temporary” closure. The president said new congressional elections would be held as soon as possible.

Kenna ignored all of this context. Instead, the ambassador declared,

The United States emphatically urges President Castillo to reverse his attempt to close the congress and allow the democratic institutions of Peru to function according to the constitution.

By this, the CIA veteran meant that Castillo should simply allow the anti-democratic, oligarch-controlled congress to launch a coup against him.

The U.S. embassy in Peru subsequently published an official statement echoing exactly what Kenna had said.

This was Washington’s green light for Peru’s corrupt, right-wing-dominated congress to overthrow President Castillo, and for the state security services to arrest him, without trial.

Mere hours after Castillo was imprisoned, the oligarch-controlled congress appointed his vice president, Dina Boluarte, as leader of the country.

Boluarte promised on the floor of the congress that she would create “a political truce to install a government of national unity”—that is, a pact with the right wing.

Boluarte had been expelled in January 2022 from the leftist Perú Libre party that Castillo had campaigned with. She proudly declared that she “had never embraced the ideology” of the socialist political party.

The day after the coup, on December 8, the State Department gave its rubber stamp to Boluarte’s unelected regime.

“The United States welcomes President Boluarte and hopes to work with her administration to achieve a more democratic, prosperous, and secure region,” stated Brian A. Nichols, the U.S. assistant secretary for western hemisphere affairs.

“We support her call for a government of national unity and we applaud Peruvians while they unite in their support of democracy,” the top State Department official added.

In the mean time, the Peruvian people were filling the streets, condemning the coup against their elected president.

On December 14, the coup regime imposed a national “state of emergency” for 30 days, and said it might also declare a curfew.

At the same time, the coup regime also said it plans to sentence Castillo to 18 months in “preventative prison,” without a proper trial that resembles anything remotely like due process.

We hope to strengthen our bilateral relationship.

Brian Nichols, the top State Department official on Latin America, added with a touch of deep irony, “We support the Peruvian people and their constitutional democracy.” He urged protesters to “reject violence.”

On the same day, Mexico, Argentina, Bolivia, and Colombia released a joint diplomatic statement with a completely contrary message, supporting elected President Castillo, saying he was the victim of “anti-democratic harassment.”

In a press briefing on December 13, the State department was asked about the protests in Peru.

“We do commend Peruvian institutions and civil authorities for safeguarding democratic stability,” he said, as Peru’s repressive police killed protesters.

Instead of condemning the rampant police brutality, the U.S. State Department blamed the protesters themselves. Price stated,

we are troubled by scattered reports of violent demonstrations and by reports of attacks on the press and private property, including businesses.

“When it comes to Peruvian President Dina Boluarte, we of course do recognize her as such. We will continue to work with Peru’s democratic institutions, and we look forward to working closely with President Boluarte and all branches of the government in Peru,” the former CIA agent stressed.

– "troubled by (..) violent demonstrations" and "reports of attacks on the press and private property"

In addition to serving as a CIA agent for nine years and current U.S. ambassador to Peru, Lisa Kenna worked as a:

At a Congressional nomination hearing on July 23, 2020, Kenna boasted of her U.S.-supremacist worldview, stating,

The longer I have been in public service, the more I am convinced that America is the world’s most exceptional nation.

I will maintain the United States’ vital relationship with Peru which has long been one of our closest partners in the region. Recently, Mission Peru has performed heroically to sustain our strong partnership and serve our fellow Americans in these challenging times.

At the time of the hearing, Peru had a right-wing government, led by President Martín Vizcarra.

The U.S. and Peru are also growing our shared support for a peaceful return to democracy in Venezuela.

She also pledged in the hearing that, as U.S. ambassador to Peru: “I commit to meet with democratically oriented opposition figures”; “We also commit to meet with independent, local press in Peru”; and “I am committed to meeting with human rights, civil society, and other non governmental organizations in the United States and in Peru.”

Clarification: This article originally reported that the meeting between the U.S. ambassador and Peruvian defense minister was on December 5, two days before the coup, based on an article in a local newspaper, but that media outlet appears to have been mistaken, and the actual meeting was on December 6, the day before the coup.