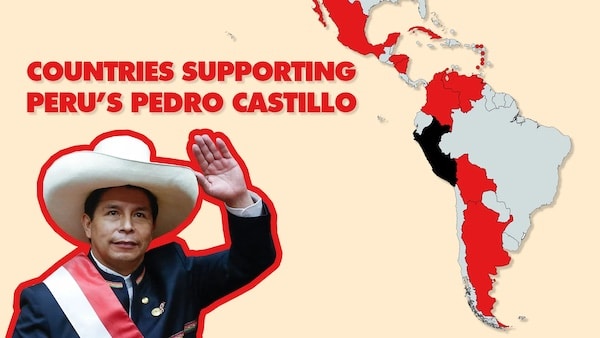 More than a dozen countries in Latin America and the Caribbean have condemned the coup in Peru and backed democratically elected President Pedro Castillo.

Meanwhile, the U.S. government has staunchly supported the coup regime, which has suspended civil liberties, imprisoned Castillo for 18 months without trial, and unleashed extreme violence on Peruvian protesters, killing dozens and wounding hundreds.

At least 14 countries in Latin America and the Caribbean have publicly expressed support for Peru’s President Castillo, including:

On the other side, Peru’s unelected coup regime has the strong support of the United States and Canada, as well as Brazil’s far-right Jair Bolsonaro administration and the right-wing governments in Ecuador, Uruguay, and Costa Rica.

Chile, led by liberal President Gabriel Boric, is the only country with an ostensibly left-of-center government that has joined the U.S. and the region’s right wing in backing the coup in Peru.

Peru’s coup regime also has the support of Washington’s Organization of American States (OAS), which acts as an instrument of U.S. foreign policy.

Since Castillo was overthrown in the December 7 coup, Peru’s unelected de facto leader Dina Boluarte has cracked down harshly, sending the military and police to kill protesters.

State security services have raided the offices of social movements, labor unions, and left-wing political parties and arrested their leaders, targeting the Campesino Confederation of Peru, the Peruvian Socialist Party, and the leftist party Nuevo Perú.

Numerous activists have reported that the coup regime is planting weapons and other materials in order to falsely accuse protesters of “terrorism.”

The police refuse to let human rights groups in to monitor them.

Peru’s U.S.-backed coup regime has also brought back war criminals who worked in the far-right dictatorship of Alberto Fujimori in the 1990s.

Today, Liendo O’Connor, the coup regime’s new intelligence chief, is borrowing the same tactics used by the Fujimorista dictatorship. He demonizes protesters as “terrorists,” thereby justifying the use of violence against them.

While Peru’s coup regime is killing protesters, suspending civil liberties, and bringing back war criminals from the Fujimori dictatorship, the United States is praising it for supposedly defending “democracy.”

Coup leader Boluarte held a friendly call with U.S. Secretary of State Antony Blinken on December 16. Her office boasted that he “reiterated the support of the United States.”

The State Department confirmed this call in a readout, stating,

Washington did not mention the dozens of protesters who have been killed and hundreds more who have been wounded by Boluarte’s unelected coup regime.

.@SecBlinken spoke with Peruvian President @DinaErcilia today to reinforce our partnership and emphasize U.S. support for a peaceful, democratic, and prosperous Peru. https://t.co/kdztJZjGw1

Mexico, Argentina, Colombia, and Bolivia published a joint statement supporting President Castillo, who they recognized was democratically elected by the people of Peru.

“For the world, it is not news that President Castillo Terrones, since the day of his election, was victim of anti-democratic harassment,” they wrote.

Gustavo Petro recognized it was a "parliamentary coup"https://t.co/pxyxM1hHpU

Colombia’s President Petro denounced the ouster of Castillo as a “parliamentary coup.” He added that the putsch is a warning for all elected left-wing leaders in Latin America.

Petro declared that “the Latin American oligarchy doesn’t want progressivism,” and “what they can’t win at the ballot box, they are trying to topple.”

The Bolivarian Alliance for the Peoples of Our America (ALBA), the left-wing economic and political bloc that consists of 10 countries in Latin America and the Caribbean, released a similar statement supporting Castillo.

“We reject the political trap created by the right-wing forces of that country against the Constitutional President Pedro Castillo, forcing him to take measures that were later used by his adversaries in parliament to oust him from office,” ALBA wrote.

“We repudiate the repression by the law enforcement agencies against the Peruvian people who are defending a government democratically elected at the polls,” they added.

ALBA members include Venezuela, Cuba, Nicaragua, Bolivia, and the Caribbean nations of Antigua and Barbuda, Dominica, Grenada, Saint Kitts and Nevis, Saint Lucia, and Saint Vincent and the Grenadines​​​.

They condemned the coup in Peru against constitutional President Pedro Castillo and denounced the lawfare in Argentina against Cristina Kirchnerhttps://t.co/ATSeNzLB37

Honduras also emphasized its “energetic condemnation of the coup d’etat” against Peruvian President Castillo, stating that he represents the “sovereign will of the people.”

“Coups d’etat should not be carried out,” declared the left-wing Honduran government of President Xiomara Castro, who restored democracy in 2021 after 12 years of right-wing coup regimes sponsored by the United States.

Honduras stressed its “energetic condemnation of the coup d’etat” in Peru, saying elected President Castillo represents “the sovereign will of the people”

Honduras was also victim of a US-sponsored coup in 2009. It didn't restore democracy until late 2021https://t.co/QLB8YjNYrc

One sees what the Peruvian people are suffering. They elect a teacher, President Pedro Castillo, and since the first moment of the election, they don’t want to recognize his victory, they ignore the victory.

And at the end they were forced by reality to recognize his victory as president, and once he was sworn in on July 28, 2021, they begin to conspire to launch a parliamentary coup.

And so begins the attack and the wearing away, votes of condemnation against his ministers, permanent harassment.

They led him to the extreme of trying to dissolve the congress of Peru.

And all the circumstances that we have seen are the oligarchic elites who don’t allow a humble teacher to rise to the presidency of Peru and try to govern for the people.

Maduro said this is a message “that the extreme right is sending to the popular and progressive movements: ‘We are not going to let them govern.’”