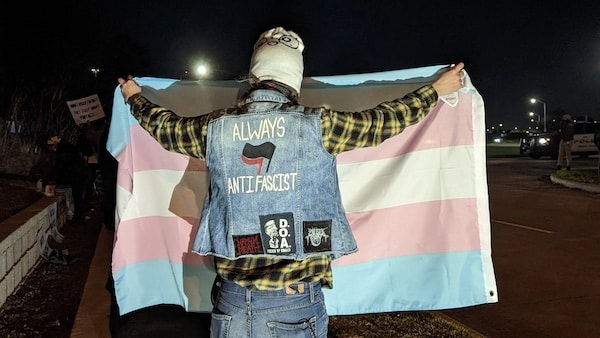 As the sun was setting on a cold December day in Grand Prairie, the latest escalation in the war on Christmas drag unfolded outside the Texas Trust CU Theater.

A small group of anti-LGTBQ+ protesters gathered there on December 17 to accost attendees and defenders of a Christmas-themed drag show, who they baselessly accused of being “groomers” and “pedophiles.” As the night went on, the initial contingent of bigots were joined by a series of increasingly extreme groups: Christian nationalists, neofascists, and eventually open neo-Nazis who threw up stiff-armed salutes and wore symbols associated with Hitler’s genocidal regime. But they were not unopposed. The right-wing extremists were outnumbered by a community defense coalition, including the Party for Socialism and Liberation and armed members of the Elm Fork John Brown Gun Club. Grand Prairie SWAT police were deployed to the scene.

Brooke Lynn Hytes, one of the performers in the Christmas drag show, remarked about the event on Twitter,

If you don’t have 150 armed protesters, and a SWAT team on the roof, outside your show are you even doing Drag?

A similar scene had played out in San Antonio just four days prior. Open-carrying members of the FBI-designated extremist militia, This Is Texas Freedom Force (TITFF), protested a drag show alongside members of Patriot Front, a neofascist group with roots in North Texas. Members of a far-right religious activist group that opposes all forms of birth control, the San Antonio Family Association, were also in attendance. They were significantly outnumbered and outgunned by another coalition of community members, including armed members of multiple John Brown Gun Clubs and Veterans for Equality, who joyously partied as a form of resistance.

“A far-right extremist group announced its intent to use guns to intimidate and essentially terrorize actresses and theatre goers who were attending a widely promoted and legal holiday event,” the Austin John Brown Gun Club wrote in a statement to the Texas Observer.

They intended this to be a message to both attendees to stay away and to the Texas Legislature to encourage them to pass bigoted laws. It was a real life example of one hateful group threatening harm and decent people supporting and defending their community.

Representatives from TITFF, which has a reputation for protecting Confederate monuments while carrying rifles, have said they are not opposed to LGTBQ+ rights but believe that “children shouldn’t be allowed in this type of entertainment.” Their calls for age restrictions are specifically for drag shows, not other forms of entertainment that children are allowed into with parental consent such as R-rated films. In San Antonio, TITFF stood alongside protesters who hurled homophobic slurs and vulgar sexual comments. Antisemitic conspiratorial thinking was on display, with some people baselessly claiming that the so-called “trans agenda” is a “CIA psyop” and that group defending the theater were paid by George Soros.

Protect Texas Kids (PTK), an anti-LGTBQ+ organization that has organized several similar protests, called for the protests in both Grand Prairie and San Antonio. Kelly Neidert, the PTK’s self-identified Christian fascist leader, has called for the “rounding up” of people who attend Pride events. Both protests featured noxious “groomer” rhetoric that’s been endorsed by the Texas GOP. Both targeted the traveling A Drag Queen Christmas show featuring several nationally renowned performers which, despite marketing itself as containing adult content, was technically open to all ages. In both instances, no one was hurt, no citations were issued by police, and the drag shows went off without a hitch. But the increasingly common presence of armed fascists outside of spaces hosting queer expression is something that’s difficult to ignore.

According to a November report by the Armed Conflict Location & Event Data Project (ACLED), there have been more than 17 anti-LGTBQ+ protests in Texas in 2022—a number that does not include these recent events, as well as pro-LGBTQ+ events that were canceled or delayed as a result of threats of counter-demonstrations or violence from anti-LGBTQ+ extremists. Several LGBTQ+ events in Texas have been canceled for such reasons, including a drag show slated for December 18 in Austin that was called off after a Christian neofascist youth group threatened to protest it.

While the events in Grand Prairie and San Antonio did not result in violence, in part due to proactive albeit inconsistent efforts by police to prevent agitators from engaging community defenders, ACLED data says that demonstrations are over four times more likely to turn violent or destructive when far-right militias or militant social movements are involved. While reporting on minor assaults and scuffles involving right-wing extremists across North Texas, I was called an antisemitic slur and assaulted while reporting on an anti-LGTBQ+ protest which was organized by PTK and attended by Christian nationalists.

The presence of far-right extremist groups has been incited in part by the likes of the Texas GOP. Republican state Representative Bryan Slaton, who has proposed a bill banning children from attending drag shows—a law that’s so broadly written that it could effectively push some queer people out of public life—has embraced the dangerous “groomer” rhetoric and was photographed with a member of TITFF who made threats outside of drag shows. Recently, the Texas GOP also evoked the “groomer” rhetoric while refusing an opportunity to unambiguously disavow the presence of neo-Nazis outside a drag show that the official Texas GOP Twitter account had tweeted about to its tens of thousands of followers.

At a time when fascist elements in Texas are emboldened and LGBTQ+ families are fleeing the state, Texas Republicans seek to further restrict access to gender-affirming care. A recent bill filed by state Representative Brian Harrison seeks to ban the use of state funding for gender-affirming care. The Texas GOP recently shared a post of Harrison’s on Twitter that reads, “No Texan should be forced to pay for their neighbor’s sex change.” This comes not long after disturbing revelations that Attorney General Ken Paxton requested a list of all Texans who had changed their gender on their driver’s license.

But the repeated optics of swastikas at anti-LGBTQ+ protests has concerned Neidert of PTK, who has also advocated for the banning of books about LGBTQ+ people in schools. She told the Dallas Morning News that she was worried about neo-Nazis showing up to the protest in Grand Prarie. Within 30 minutes of Neidert making the comment, neo-Nazis arrived. One of them who wore a swastika patch had a visible handgun sticking out of his pants pocket. (It bears mentioning that transgender people were among the first marginalized group the Nazi regime targeted after it took power in Germany. The Institute for the Science of Sexuality was the target of organized attacks that resulted in the burning of the organization’s archives.)

While Neidert has deflected responsibility by saying she doesny invite the neo-Nazis to her events, it’s clear her rhetoric has inspired such extremist groups to show up. In Grand Prairie, members of the Aryan Freedom Network, a neo-Nazi group with roots in Texas who have shown up outside multiple drag shows, carried signs that looked a lot like those carried by the non-Nazi protesters. Neidert has yet to denounce other far-right groups who show up regularly to her protests, such as the Proud Boys—a neofascist street gang with chapters across the country whose leaders are currently in trial facing seditious conspiracy charges. Toward the end of the protest in Grand Prairie, Neidert was seen speaking with what appeared to be a member of Patriot Front.

Neidert did not respond to a request for comment.

In response to a shameless GOP-endorsed hate campaign that paints queer people as pedophilic “groomers” and incites armed fascist groups to menace LGTBQ+ events, some Texans have decided to organize in defense of their local LGTBQ+ communities. While armed members of John Brown Gun Clubs have opposed fascists in a handful of cities and made waves in the media, the face of antifascist resistance is not uniformly clad in black. Scenes from across Texas illustrate that a wide variety of people have stood up to oppose hate. Most of them have been unmasked and unarmed, such as the parents who prevented Proud Boys from disrupting an event at a library in McKinney.

Neidert, whose activism is supported by a 501(c)(4) nonprofit with unknown funding sources, has baselessly claimed that such community defense mobilizations are “paid protesters.” During a True Texas Project meeting in September, Neidert said her nonprofit doesn’t take “Soros money,” which one of her supporters clarified to mean “Jew money.” A recent report in the Texas Tribune revealed that her brother Jake Neidert, a fellow anti-LGBTQ+ activist and legislative director for Republican state Representative Tony Tinderholt, received payments from Defend Texas Liberty PAC, a fundraising group tied to West Texas oil billionaires.

Among the volunteer community defenders in San Antonio and Grand Prairie were David Michael Smith, a retired professor of political science who lives in the Houston area, and his wife Rona, a licensed counselor. David and Rona, both longtime activists, are involved with the Houston Socialist Movement and the United Front Against Fascism. They traveled to San Antonio and Grand Prairie to stand in solidarity with local LGTBQ+ communities. Carrying long arms, they stood stoically and unmasked.

“When we saw that a militia group would be in San Antonio, we thought we should go and support the folks who were organizing there,” Smith told the Observer.

Smith, who said his first participation in antifascist action was in Tupelo, Mississippi in 1978, has been heartened by the diverse and sizable community defense mobilizations across the state. He and Rona were also in Houston outside a drag show earlier this year that neo-Nazis and fascists had targeted for harassment.

“We have to have antifascists of all ages and hues,” Smith said.

And we have to have truly liberatory politics. That’s how we’ll beat them.

Steven Monacelli is an investigative journalist in Dallas. His reporting has been featured in Rolling Stone, The Daily Beast, The Real News, Dallas Observer, Dallas Weekly, and more. He is also the publisher of Protean Magazine, a nonprofit literary publication.