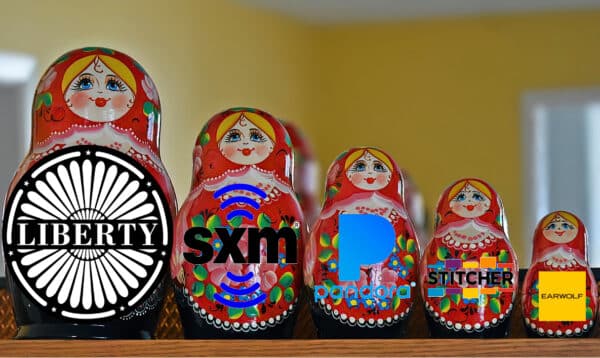 News consumers hear about the titans of podcasting regularly these days: Spotify, iHeartMedia, Amazon Music. But there is one name that’s curiously absent: Liberty Media.

The company recently got some coverage after Taylor Swift fans rose up against Ticketmaster’s monopolistic pricing. The live event company increased its market share after being bought by Live Nation, a Liberty subsidiary. Forbes (1/21/22) also named Liberty the “most valuable sports empire” from its profits off its Formula One and Atlanta Braves subsidiaries. 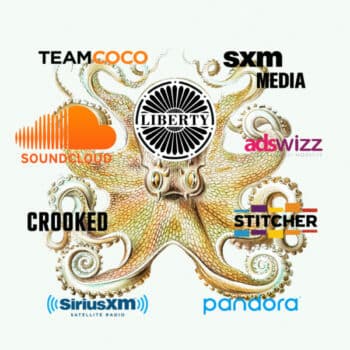 In 2021, it rolled the advertising wings for all three of those companies into SXM Media, now one of the largest ad sellers in podcasting. These forces combined make it the only real direct competitor to Spotify for a vertically integrated podcast empire (FAIR.org, 4/21/21).

An avalanche of consolidation over the past few years has made the podcast industry difficult to report on. It’s tedious for readers to shift through chains of corporate subsidiaries, so journalists seem to simply ignore them.

The media press do cover Sirius, but consistently fail to highlight its corporate parent or its own subsidiaries. The satellite radio giant itself owns Pandora and Stitcher, which includes the Midroll ad business, which was rolled into SXM, and the Earwolf podcast network (and oh what a simplification that is). But of much greater consequence is the media’s consistent failure to highlight that all of these companies are owned by Liberty Media.

In 2021, the Department of Justice gave Liberty the go-ahead to purchase iHeartMedia (formally Clear Channel), the largest radio broadcaster in the country. iHeart reaches over 90% of Americans every month “through podcasts, AM and FM stations and online platforms,” according to Variety (10/19/21). Liberty sold off its entire stake in iHeart last year, but had the deal proceeded, it would have merged two of the nation’s largest audio oligopolists into one. 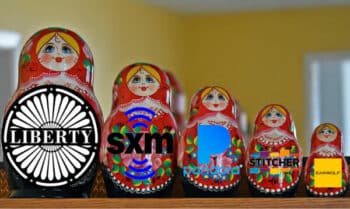 The DoJ decision was sparsely covered, but even if it was front-page news, you can only understand what Liberty taking control of iHeart would have done if you already understood its other audio holdings and how they fit together. This is a bigger picture that is sorely lacking in coverage of either company.

When mergers happen, there is often a natural news bias toward the company doing the purchase. But the complete failure to contextualize which companies the purchaser and purchasee already own, or are owned by, obscures monopolists and insulates them from scrutiny.

The Wall Street Journal (7/6/20) reported that SiriusXM bought Stitcher, and Forbes (7/7/20) noted this will “give it the tools to compete with Spotify,” without a single mention of Liberty Media. Ashley Carmen has a superb deep dive into the after-effects of SiriusXM’s purchase of Stitcher for the Verge (3/22/22), but she never mentions that Sirius itself has a parent company.

Billboard  (10/23/20) reported when iHeart acquired Voxnest, and Variety (2/17/21) noted when it bought Triton Digital the next year. Again, no Liberty. When the New York Times(4/3/19) covered iHeart’s potential IPO, it failed to mention Liberty held a stake in the company at the time.

News sites also want to write about companies their audience wants to hear about, and that’s often the platforms and networks that they actually use. Spotify’s purchase of popular podcast network Gimlet Media was a darling story of the podcast press; meanwhile, their purchase of Anchor, an ad seller, was covered less. Today, Anchor is an engine that’s key to the audio company’s success, while Gimlet lags. 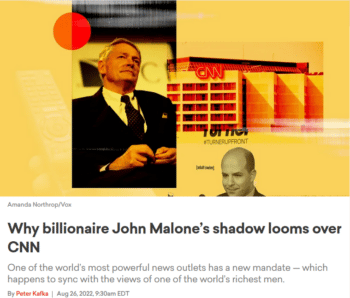 Liberty Media‘s John Malone (Vox, 8/26/22): “Fox News, in my opinion, has followed an interesting trajectory of trying to have ‘news’ news, I mean some actual journalism, embedded in a program schedule of all opinions.”

Over-focus on podcast networks poses a lot of problems, because they are often nested at the bottom of the new corporate podcasting Matryoshka dolls. Think Earwolf, owned by Stitcher, owned by Pandora, owned by Sirius, owned by Liberty.

OK, take a deep breath, because Liberty itself is not the top of this nested power structure. It’s owned by one man: John Malone. Worth over $9 billion, and the largest landlord in the United States (FAIR.com, 2/17/22), Malone’s media influence does not end with audio. He is also the “power behind the throne” of the new company formed from the merger between AT&T’s Warner Brothers and Discovery (Next TV, 11/21/22). Lest I fall into the trap of my own criticism, that includes the following entities: CNN, HBO, DC Comics and 67 other companies.

Malone was the long-term chair of TCI, the U.S.’s second-largest cable provider (and “worst discriminator,” according to the NAACP) until it was purchased by AT&T in 1999.

Liberty Media began as the cable programming subsidiary of TCI, and helped the cable company rise to the top by purchasing stakes in the programs it ran on its channels, including a 10% stake in Time Warner, and a controlling stake of Discovery (Extra!, 11—12/97). Liberty even owned PBS NewsHour (yes, you read that correctly—Extra!, 11/10) from 1995 until 2014, when Washington, DC’s public media station WETA bought the program.

Under AT&T’s ownership, it absorbed TCI’s digital music and satellite businesses, before splitting off into an independent company in 2001 under Malone’s control (CNN, 8/10/01).

Malone is a noted conservative who contributed over $1 million to Donald Trump’s inaugural campaign. Before the Warner/Discovery merger went through, he told CNBC in an interview (11/18/21) he wished CNN would “actually have journalists,” then praised Fox for its “actual journalism” (FAIR.com, 2/17/22). Many journalists at CNN suspect the media company’s recent firing of celebrated media reporter Brian Stelter was a political decision at the behest of Malone (Vox, 8/18/22).

There are rumors the merged company may attempt to absorb NBC Universal, along with its streaming platform Peacock, as early as 2024 (The Street, 9/22/22).

We’re getting far afield from podcasts here—but the whole point is that these things are all connected. When we put these threads together, we see a bigger picture that’s important for news consumers to digest. 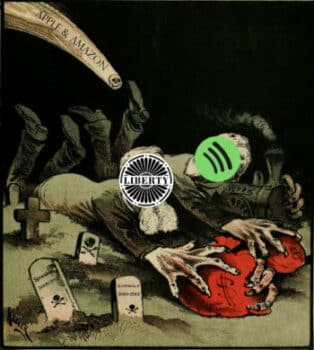 With the podcast industry thinning out, Liberty and Spotify are fighting for dominance.

All of these failures in clear reporting obscure the bigger picture. Mainstream coverage might leave you with the impression of a podcast landscape dominated by Spotify and Apple. But if we incorporate an understanding of corporate ownership, there are two main end-to-end podcast empires with a clear grip on the market at this point: Spotify and Liberty Media’s SiriusXM (FAIR.org, 4/21/21).

Sirius certainly sees it that way. A former Stitcher employee told the Verge (3/22/22), “Spotify is the devil to SiriusXM.”

Spotify has the bigger platform, with 400 million monthly listeners (CNET, 2/2/22), while Pandora has hemorrhaged listeners year after year since 2019. (Note that these numbers are from before big artists like Neil Young boycotted Spotify over Joe Rogen; Young still has an entire channel on SiriusXM.) But Liberty has built an ad-selling powerhouse in SXM Media that Spotify’s own Megaphone struggles to compete with. In fact, with SXM’s help, Pandora has increased its ad revenue despite shrinking listenership.

SXM Media signed deals with NBC, MSNBC, CNBC, Soundcloud and Audiochuck early on, and has since signed with Spanish-language reVolver Podcasts and Crooked Media (home of Pod Save America). In February 2020, SiriusXM made a $75 million minority equity investment into SoundCloud, which expands on their ad agreement.

Sirius has also drawn more listeners to its content than Spotify. Spotify’s Joe Rogan Experience remains the most popular individual podcast, while SiriusXM’s Crime Junkies comes in third in Edison Research show rankings. But the Stitcher podcast network has topped Triton Digital’s weekly download rankings for over a year, after it edged out NPR. And SXM Media beats Spotify in Edison Researcher’s rankings for “top podcasts networks by reach.”

But winning the so-called “podcast wars” has never been just about platforms. It’s about building a whole end-to-end system for producing, hosting, monetizing and then platforming content. Spotify and Liberty are the only companies that have unlocked this “final infinity stone” in the U.S. market (Input, 2/22/21).

Forest Hunt is an independent journalist who writes about the media, podcasting, higher education, and much more. You can find them on Medium, Twitter and ForestHunt.org