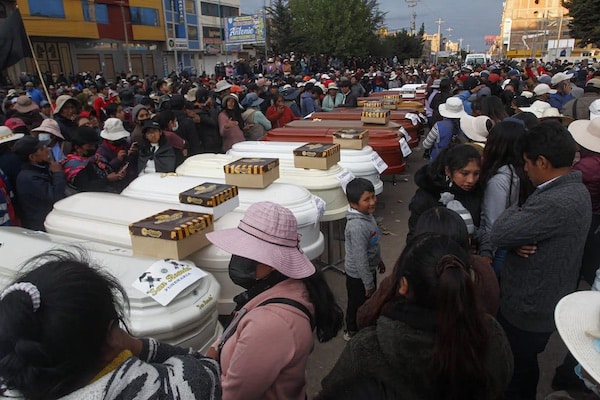 Relatives of 18 people killed by police repression wait with empty coffins outside the morgue of the Carlos Monge Medrano hospital in Juliaca, southern Peru, on January 10, 2023. Photo: Juan Carlos Cisneros/AFP.

On January 9 alone, at least 18 were killed by the coup regime’s security forces in Juliaca. Peru is now mobilized in a national general strike, with demonstrators demanding the return of the president they elected, Pedro Castillo, imprisoned without trial since the coup. Video footage has emerged of military troops firing live ammunition at demonstrators, brutally beating unarmed protesters, and using helicopters to control crowds.

The electoral choice of poor and Indigenous Peruvians, former teacher Pedro Castillo is Peru’s first Indigenous president and the most left-wing president in the country’s history. He promised to rewrite Peru’s Constitution and ensure that the country’s resources were not pillaged by foreign corporations, as they have been for centuries. He was never allowed to govern. The right-wing forces in Peru, in league with transnational and U.S. corporations, tried to impeach him three times, claiming he was morally or mentally unfit for the position.

Attempting to portray him as a dictator-in-the-making, mainstream media claim that Castillo carried out a “self-coup.” President Castillo acted constitutionally at all times, moving to dissolve Congress only after Congress made it impossible for Castillo to enact any of his campaign promises and forced dozens of his cabinet ministers out of office. This motion is clearly provided for in Article 134 of Peru’s Constitution, which stipulates that the president can dissolve Congress if it refuses to support two cabinets appointed by the president. Castillo’s administration was forced to appoint at least four complete cabinets in the first six months alone, and over 80 ministers in less than 18 months in office.

The U.S. has supported Castillo’s overthrow since day one. The U.S. speedily expressed support for Castillo’s replacement, the coup leader Boluarte, recognizing her “presidency” minutes after she was appointed by the coup regime. Washington, DC-based Organization of American States, which presents itself as an arbiter of democracy across the Americas, promptly issued a statement steeped in hypocrisy, claiming that it supported peace, democracy, and the unelected “president” of the coup regime.

Mainstream media outlets exploded immediately with the news that Peru now had its first woman president. Of course, that would have been great news, had she been elected, but Boluarte has never received any votes for president; nevertheless, she initially stated that she would occupy the presidency until 2026.

The blood of Peruvians is on the hands of the U.S. In 2021, under disgraced president Donald Trump, the U.S. appointed CIA agent Lisa Kenna as ambassador to Peru. Kenna was “senior aide” to Trump’s Secretary of State Mike Pompeo, who previously headed the CIA. Kenna met with Peru’s minister of defense the day before the coup—perhaps to suggest that he arrest the president, which is what Peru’s security forces did the following day, December 7, 2022. The U.S. has armed and trained Peru’s military for decades and continues to occupy the nation via its naval base in the capital, Lima, and numerous U.S. Southern Command (SOUTHCOM) radar sites.

The coup and the massacres have sparked a mass uprising in Peru. A general strike is occurring; barricades have been set up in at least 45 municipalities. Let us hope that—as we saw in Bolivia in 2020—democracy can be restored and an administration that stands up for the rights of the poor and Indigenous is able to take power. Whether in the short or long term, the people’s struggle against exploitation will determine the course of history.