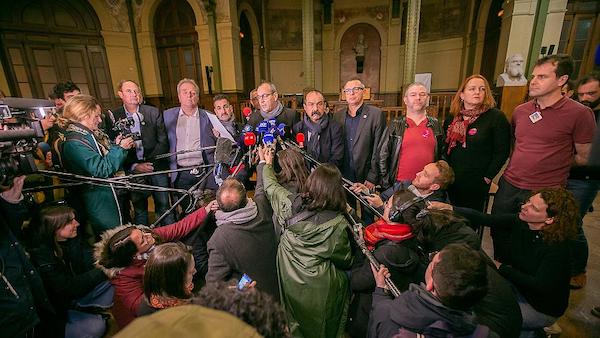 On January 10, all the major trade unions in France gave a joint call for protests against the proposals for pension reforms announced by the Emmanuel Macron-led government. The unions, including the General Confederation of Labor (CGT), the French Democratic Confederation of Labor (CFDT), Workers’ Force (FO), the French Confederation of Christian Workers (CFTC), the French Confederation of Management—General Confederation of Executives (CFE-CGC), the National Union of Autonomous Trade Unions (UNSA), Fédération syndicale unitaire(FSU), and Solidaires, have called for a general strike and nationwide protest mobilization on January 19. The left-wing coalition Nouvelle Union Populaire Écologique et Sociale (NUPES) composed of the La France Insoumise (LFI), French Communist Party (PCF), and others also oppose the reforms and have extended support to the protests. Youth groups, including the Young Communist Movement of France (MJCF), have also called for protests against the reforms.

On January 10, French Prime Minister Elisabeth Borne unveiled government plans towards pension reforms, which would increase the retirement age in the country from 62 to 64. In addition, it was proposed that workers will need to have worked for at least 43 years to get a full pension, starting from 2027. Earlier, the reforms announced by the first government under Emmanuel Macron, which contained similar proposals such as an increase in retirement age, replacing 42 pension systems with one scheme, introduction of a grade point system for ascertaining pension amounts, among other proposals, were vehemently opposed by trade unions and had not been implemented due to the COVID-19 crisis.

On Wednesday, the New Ecological and Social Peoples’ Union (NUPES) slammed the reforms proposed by the government as an attack on the pension system and an attempt to impose a project that 85% of the people reject. NUPES has reiterated their demand for the right to retire at age of 60. NUPES leader Jean-Luc Melenchon has declared that “the reform is a serious social regression.”

On January 10, in their joint statement, the major trade unions wrote that,

this reform will hit all workers, especially those who have a lower life expectancy, and those and those whose professions are not recognized. It will aggravate the precariousness of those who are no longer employed before retirement, and strengthen gender inequality.

French Communist Party (PCF) leader, Fabien Roussel MP, said that “the government is announcing that our pension funds are bankrupt. It is a lie! We need pension reform to increase pensions! Let’s finance it through employment, wage increases and taxing the €80 billion [USD$86.10 billion] dividends distributed to CAC 40 shareholders in 2022.”

Youth groups also called for a national march protesting the reforms in Paris on January 21. The youth groups called for a retirement at age 60, an increase of the SMIC and wages as well as pension, rent freezes and price freezes for basic necessities, massive investments in ecological bifurcation and public services, including transport, health and education, taxation of superprofits, and a guarantee of autonomy for young people.

As the Young Communist Movement of France (MJCF) has written,

Emmanuel Macron’s project is clear: the young unemployed, the old at work until exhaustion. The president presents himself as a modern man, but his project takes us straight back to the nineteenth century!