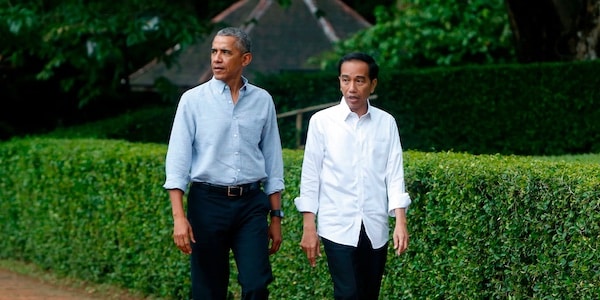 JOKO WIDODO, the president of Indonesia, expressed regret on Wednesday about 12 instances of “gross human rights violations” over the past decades of the nation’s history–including an extraordinary U.S.-backed bloodbath carried out by the Indonesian military following a coup in 1965.

The carnage targeted the Indonesian Communist Party–known as Partai Komunis Indonesia, or PKI–as well as their family members, purported sympathizers, or people who stood next to a member of the PKI at a bus stop once. (It was not an exact science.) At least 500,000 Indonesians were killed, often up close with machetes or knives. Soon afterward the Central Intelligence Agency, which played a key role in supporting the massacre, called it “one of the worst mass murders of the 20th century.”

Remarkably, Barack Obama used similar language in a passage in his 1995 autobiography “Dreams From My Father,” referring to the killings as “one of the more brutal and swift campaigns of suppression in modern times.” Yet this section of the book has received almost no notice. A Google search finds references to that sentence from Boston public radio station WBUR; the student newspaper at Northwestern; the New York Review of Books; my dormant blog; and little else.

As Obama describes it, he moved with his mother from the U.S. to Indonesia in 1967 after she divorced his father and married Lolo, an Indonesian engineer. Obama recorded the audiobook version of “Dreams From My Father” himself, so we can hear the president-to-be describing the terrifying facts his mother learned about both their adopted country and the country they’d come from:

Or if you prefer to read rather than listen, here are Obama’s words:

She found herself a job right away teaching English to Indonesian businessmen at the American embassy… The Americans were mostly older men, careerists in the State Department, the occasional economists or journalists who would mysteriously disappear for months at a time, their affiliation or function in the embassy never quite clear…

These men knew the country, though, or parts of it anyway, the closets where the skeletons were buried. Over lunch or casual conversation they would share with her things she couldn’t learn in the published news reports. They explained how Sukarno had frayed badly the nerves of a U.S. government already obsessed with the march of communism through Indochina, what with his nationalist rhetoric and his politics of nonalignment–he was as bad as Lumumba or Nasser!–only worse, given Indonesia’s strategic importance. Word was that the CIA had played a part in the coup, although nobody knew for sure. More certain was the fact that after the coup the military had swept the countryside for supposed Communist sympathizers. The death toll was anybody’s guess: a few hundred thousand, maybe; half a million. Even the smart guys at the Agency had lost count.

Innuendo, half-whispered asides; that’s how she found out that we had arrived in Djakarta less than a year after one of the more brutal and swift campaigns of suppression in modern times. The idea frightened her, the notion that history could be swallowed up so completely, the same way the rich and loamy earth could soak up the rivers of blood that had once coursed through the streets; the way people could continue about their business beneath giant posters of the new president as if nothing had happened…

Power. The word fixed in my mother’s mind like a curse. In America, it had generally remained hidden from view until you dug beneath the surface of things; until you visited an Indian reservation or spoke to a black person whose trust you had earned. But here power was undisguised, indiscriminate, naked, always fresh in the memory. Power had taken Lolo and yanked him back into line just when he thought he’d escaped, making him feel its weight, letting him know that his life wasn’t his own. That’s how things were; you couldn’t change it, you could just live by the rules, so simple once you learned them. And so Lolo had made his peace with power, learning the wisdom of forgetting.

The 1965 coup and its hideous aftermath is covered in detail in the recent book “The Jakarta Method” by former Washington Post reporter Vincent Bevins.

Indonesia was governed from World War II until 1965 by President Sukarno (some Indonesians have a single name) who had previously led the resistance to Dutch colonization. This made the U.S. increasingly unhappy. Indonesia was enormous, with the world’s sixth-largest population, and the PKI was the third-biggest Communist Party on Earth, after China’s and the Soviet Union’s. It mattered little to the American government that Sukarno was not himself a Communist, or that the PKI had no plans or capacity for violence. It was bad enough that Sukarno did not leap to put the Indonesian economy at the service of U.S. multinationals, and that he helped create the Non-Aligned Movement of countries that wished to stay out of both the Soviet and American blocs.

The U.S. goal, then, was to extract Sukarno from power in favor of someone reliable (from the American perspective), while creating a pretext for the Indonesian military to destroy the PKI. But how to make this happen?

Howard P. Jones, the American ambassador to Indonesia until April 1965, told a meeting of State Department officials just before leaving his post, “From our viewpoint, of course, an unsuccessful coup attempt by the PKI might be the most effective development to start a reversal of political trends in Indonesia.” This, he believed, would give the army a “clear-cut kind of challenge that would galvanize effective reaction.” A British Foreign Office official made the case that “there might therefore be much to be said for encouraging a premature PKI coup during Sukarno’s lifetime.”

Coincidentally enough, this is exactly what appeared to happen. On September 30, 1965, a group of young military officers kidnapped six Indonesian generals, claiming that they planned to overthrow Sukarno. All six generals somehow soon ended up dead.

Suharto, an Army general who was, fortuitously, not targeted, announced with his allies that the dead generals had been castrated and tortured by female members of the PKI in a “depraved, demonic ritual,” according to Bevins. Years later it was discovered that none of this was true; all but one of the six generals had simply been shot.

To this day, it’s impossible to say what truly happened. Bevins lists three theories. First, the leader of the PKI may have helped plan the events of September 30 with contacts in the military. It may have been the young members of the military acting alone with no PKI involvement. Or Suharto may have collaborated with the September 30 officers, pretending that he would support them and then betraying them as part of a plan to seize power for himself.

In any case, Suharto certainly seemed to have a plan ready to execute. Soon afterward, Sukarno was out and Suharto was in charge. Then the killing began, in what the Indonesian army internally called Operasi Penumpasan, or Operation Annihilation.

The butchery lasted for months, into early 1966, with the New York Times referring to it as a “staggering mass slaughter of Communists and pro-Communists.” The U.S. was not only aware of what was happening, but was also an eager participant, providing lists of PKI members to the Indonesian military. One American official later said, “They probably killed a lot of people, and I probably have a lot of blood on my hands, but that’s not all bad. There’s a time when you have to strike hard at a decisive moment.” According to Time magazine, there were so many corpses that it created “a serious sanitation problem in East Java and Northern Sumatra where the humid air bears the reek of decaying flesh. Travelers from those areas tell of small rivers and streams that have been literally clogged with bodies.”

New York Times columnist James Reston soon wrote about these events under the headline “A Gleam of Light in Asia.” Americans needed to understand these “hopeful political developments,” including the fact that the “Indonesian massacre” could not have occurred “without the clandestine aid [Indonesia] has received indirectly from here.” Recently declassified records illustrate just how right Reston was.

Suharto ruled Indonesia brutally for the next three decades, remaining a key U.S. ally until he fell from power in 1998. Only now, over 57 years since the coup, is the Indonesian government barely beginning to face its own past.

“Acknowledging some of the crimes of the Suharto regime is a start,” says Bradley Simpson, a historian and expert on this period.

But President Widodo must do more to initiate a long overdue process of accountability and restitution for victims and survivors of the 1965—1966 killings. So do governments like the United States and Great Britain, which were willing accomplices in the Indonesian army’s campaign of mass murder.

There is no sign of that happening in U.S., however. Obama, with his direct personal knowledge of Indonesia and this history, might seem to be a natural leader for this process. But you shouldn’t get your hopes up. He also explains in “Dreams From My Father” that he learned in Indonesia that “the world was violent … unpredictable and often cruel.” His stepfather, he records, taught him that “Men take advantage of weakness in other men. They’re just like countries in that way … Better to be strong. If you can’t be strong, be clever and make peace with someone who’s strong. But always better to be strong yourself. Always.”