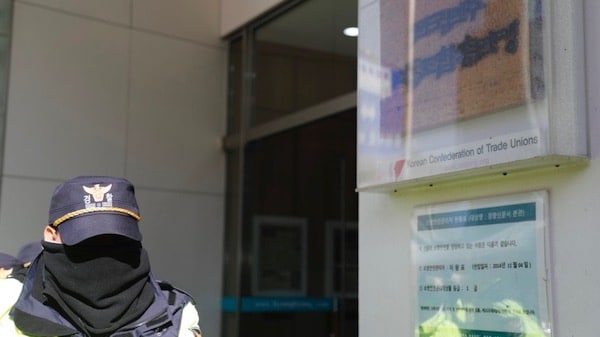 Investigators from South Korea’s National Intelligence Service and National Police Agency forcibly entered and conducted a raid at the Korean Confederation of Trade Unions. (Photo: Joon Kim/Labor and the World via KCTU)

On Wednesday, January 18, the Korean Confederation of Trade Unions (KCTU), one of the largest workers’ organizations in South Korea, was raided by the intelligence and the police as the government escalated its persecution of trade unions and progressive groups in the country. Multiple raids were conducted at the offices of the KCTU and its affiliates by the National Intelligence Service (NIS) along with the National Police Agency.

As per reports, the NIS procured a search and seizure warrant from the court against the KCTU based on alleged charges of violating the controversial National Security Act of 1948. NIS officials reportedly stated that the search came after years of “internal investigations into … alleged links to North Korea,” but refused to divulge any further information.

Four people were the prime targets of the raid. These include a senior KCTU leader, one official each from its affiliates, the Korean Health and Medical Workers’ Union and the Korean Metal Workers’ Union, and a union organizer and anti-war activist from Jeju Island.

Apart from the trade union’s headquarters in Seoul, raids were carried out at multiple locations including at the homes of the accused union leaders. At its Seoul headquarters, KCTU officials confronted the investigators, demanding that the search be conducted in the presence of a lawyer, but the NIS and the police investigators reportedly pushed their way into the office.

The confrontation lasted more than three hours before the search could proceed. The KCTU live-streamed the confrontation and parts of the raids on YouTube showing investigators forcing their way into the office. KCTU officials also stated that IDs were taken along with photographs of the people present at the headquarters without their permission.

In a press conference held in the afternoon, shortly after the raid started, Han Sang-jin, a spokesperson of the KCTU, stated that the raid appeared to be an attempt to forcibly link the ongoing persecution of trade unionists to an alleged North-Korean “spy ring.”

“(Investigators) deployed hundreds of police personnel and even brought air mattresses, creating a scene, even though we don’t have much reason to resist,” Han said. The union also decried the misuse of the controversial National Security Act.

This law, passed in the middle of the Korean War, contains sections that criminalize meetings with North Korean officials, as well as praising or promoting North Korea or communism. It was widely used for anti-communist and anti-trade union persecution and to suppress democratic voices during the Cold War.

The raid comes as the conservative right-wing government of President Yoon Suk-yeol is targeting leaders of progressive groups and labor movements in the country using unsubstantiated allegations of links to, and espionage for, North Korea.

Intelligence officials have alleged that some of the recent workers’ strikes and anti-war protests held after Yoon took power were carried out under orders from North Korea. The National Security Act was used as the basis for investigations and raids in these cases as well.

Over the past several weeks, multiple raids have been conducted at the homes of progressive activists and KCTU organizers, reported The Korea Times. These have taken place in Jeju Island, Jinju and Changwon in the South Gyeongsang province, and in Jeonju in the North Jeolla province. The raids have been part of the NIS investigation into a supposed “spy ring” within progressive groups in the country.

While the NIS has denied that the “spy ring” investigation is connected to Wednesday’s raid at KCTU, activists have decried the intimidation and targeting of progressive opposition voices with Cold War-era laws and anti-communist witch-hunts, which were common during the military dictatorship era.

The raids also come at a time when president Yoon is facing low approval ratings, along with corruption allegations against his wife, growing anti-war sentiment, and protests against U.S. military presence in South Korea. There have also been widespread trade union strikes across the country, like the recent truckers’ strike.

“The investigation is still underway and no one has been indicted. Yet solely based on what’s written on search warrants, it has been exaggerated as a spy ring case,” the group said in a statement quoted by The Korea Times. The statement also noted that they suspected the government was leaking “falsified information to conservative media outlets” to avoid criticism over recent lapses in border security.