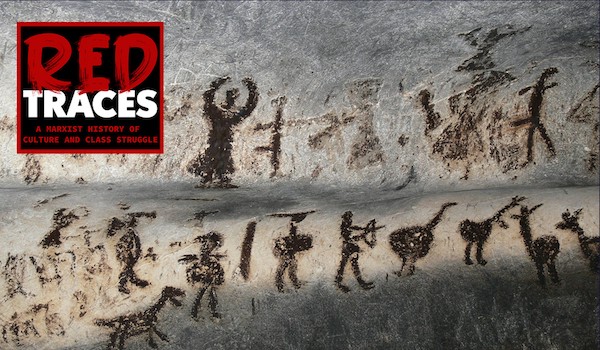 When does art begin? This intriguing question is wrapped up in the anthropological and archaeological debate concerning at what point in the distant past can we say the human species begins. It is also crucially part of the wider, philosophical question about what it means to be a human being and how are we distinguished from the rest of nature.

Contemporary archaeology indicates somewhere between two million and 1.5 million years ago, related hominids such as homo erectus and homo habilis began to develop tool-making skills. Another evolutionary leap around 200 000 years ago saw the rise of our particular branch of the hominid line, homo sapiens, with even more developed cerebral capacity and the coming of language acquisition.

It is in this latter period that we can presume artistic endeavour in the form of bodily decoration, dancing, drumming and other forms of impermanent creativity first took place. We can reasonably speculate that early homo sapiens invented artistic expression as an offshoot of their awareness that labour was the means by which they could actively shape their environment and cease to be solely at the whim of natural forces, like every other life-form on the planet.

The first durable forms of art, however, appear in the period known to archaeologists as the Upper Palaeolithic, dated from around 40 000 years ago. The best known examples of this explosion of creativity are the cave paintings which have been discovered all over the globe, but the most stunning of which are concentrated around the France-Spain border in locations such as Altamira, Chauvet and Lascaux. These began to be discovered in the second half of the nineteenth century when Darwin’s theory of evolution encouraged a stronger interest in the earliest epochs of human development.

Such are the levels of skill and visual impact associated with these iconic images that there was widespread scepticism in the years following their discovery that they could be the work of the earliest human beings. One of the amateur archaeologists who pioneered the study of Palaeolithic art, Marcelino de Sautuola, went to his grave in 1888 a broken man because contemporary critics were adamant that the cave paintings were beyond the capability of early homo sapiens and must be the work of much more recent forgers or pranksters.

We have invented nothing

There has been much speculation over the following decades about the methods, nature and purpose of the cave paintings. The obvious absence of oral or written testimony by their creators mean we can never be certain of what inspired the images, and as this form of expression lasted for thousands of years in a diversity of locations, there were no doubt multiple motivations. A lot of the commentary on this art form has to be accepted as educated speculation at best.

The consensus of archaeologists today is that the Palaeolithic artists used a mixture of ochre or clay with charcoal and oxides blown through a small wooden tube to create the images of bison, mammoths, horses, rhinoceroses and other forms of wildlife that the hunter-gatherer humans of the epoch were dependent on for their survival. Notably, only sporadically do the cave paintings portray members of the species that was creating the images. The skill and insight displayed by the creators in terms of accuracy and composition was famously affirmed by Picasso’s comment:

Since Lascaux we have invented nothing.

There is no consensus on why caves were chosen as the location for these images, as their relative inaccessibility obviously made them unsuitable for large-scale public display. It may be that being hidden from view had a ritual significance. On the other hand, it is quite possible there were similar images painted in more visible locations, but that these have been lost due to the effects of erosion over the succeeding millennia.

Not the least remarkable aspect of cave paintings is that even though this is an historical expression of the artistic impulse that feels most remote from our experience and way of life in the twenty-first century, many observers feel some psychological connection with its creators. The famous image of a prehistoric human hand sprayed onto the wall of Caverne du Pont-d’Arc at Chauvet makes most observers feel an instant connection with the Paleolitlithic artist that short-circuits the tens of thousands of years which separate artist and viewer.

The remoteness in time of the cave paintings might seem initially to make them an art form that would be most resistant to contextualisation within a socio-historical framework that is the hallmark of Marxist aesthetic criticism. In 1945, however, Max Raphael published an analysis of Palaeolithic art that explicitly deploys the methods of historical materialism in a cogent manner which has made his work cited and respected even by many non-Marxist commentators today.

Raphael, as a German refugee who had fled Nazi rule, was insistent that, although we are separated by millennia from the creators of the cave paintings, their aspirations and anxieties are ones that we can still identify with:

Upper Palaeolithic art shows faith in all natural beings and their affinity and the existence of an organisational force capable of translating magic into reality. This was the magic of the Palaeolithic age and its art. In the best Palaeolithic paintings are shown charges of energy that comes from an objective supernatural character and these charges are perpetrated through the existential intensification of the object… artist as a magician had all the powers of society at his disposal, inspired by the group who believed in and took magic and resurrection seriously… the physical and ideological forces of the social group were always there to translate the magic into actual or imagined reality.

Raphael’s focus on the central role of magic in the inspiration for the cave paintings is widely accepted by many analysts. However, Raphael’s Marxism, informed by his direct observations and extensive note taking of the paintings in 1935, enabled him to understand that the concept of magic is one that needs to be situated in a historical context that reformulates our understanding: ‘Palaeolithic man knew no magic without action, nor could he imagine action without magic; to him theory and practice were one.’ In other words, magic for the earliest humans acted in a similar way that science does for us.

Magic incorporated the totality of beliefs, observations and techniques that had accumulated over many generations and which enabled the hunter gatherers to achieve a relationship of equilibrium with the creatures with whom they co-existed. Raphael, however, also perceived the art as an intuitive celebration on the part of the earliest humans of their unique capability that marked them out as intellectually superior to those same creatures.

He utilised the dialectical element of historical materialism to underline that the cave artists simultaneously perceived their unity with the rest of the animal kingdom, but also their difference from it. They developed a primal understanding that humans were, by definition, not simply objects of nature, but also subjects that could collectively mould it in ways to optimise their lives. The artists’ satisfaction in the creation of a spectacle of which no other lifeform is capable is a point of communication across the epochs which we can appreciate as part of our shared species being:

It has been said that Palaeolithic artists were incapable of dominating surfaces or reproducing space: that they could produce only individual animals, not groups and certainly not compositions. The exact opposite of this is true: we find not only groups, but compositions that occupy the length of the cave wall or the surface of a ceiling; we find representations of space, historical paintings and even the golden section! But we find no primitive art.

The humans responsible for the cave paintings were living during the earliest mode of production known to Marx and Engels as primitive communism, lasting from the emergence of homo sapiens to the development of agriculture, about 10 000 years ago. The label ‘primitive’ may appear archaic here but the founders of Marxism are simply referring to chronology and in no sense is this a derogatory term.

Bourgeois sceptics of the possibility of communism in the future are wilfully blind to the fact that this was the most durable form of social and economic activity across the span of human history, and the one in which our ancestors essentially cooperated to ensure the survival of the species in the face of a hostile and unforgiving environment. According to Engels, this was a world where:

Everything runs smoothly without soldiers, gendarmes or police, without nobles, kings, governors, prefects or judges, without prisons, without trials. There can be no poor and needy—the communistic household… know their responsibility towards the aged, the sick and those disabled in war… All are free and equal, including the women.

Primitive communism was no utopia, however. The earliest humans were not yet capable of generating a social surplus that would enable them to sustain anything more than a subsistence existence. Famine, drought, floods and threats by faster creatures with claws and sharper teeth ensured the human race could only secure the barest toehold on survival for millennia. The relative scarcity of food and resources, Marx and Engels further argue, entailed that there was no possibility of significant social inequality at this stage of human development and that altruism and collectivism must have been the guiding drivers of behaviour.

The incalculable advances in terms of communication, technology and lifestyles that have occurred over the vast span of time that separates us from our Palaeolithic ancestors may seem to rule out any meaningful intellectual connection between us and them. Max Raphael, however, as a committed socialist and fugitive from fascism, brilliantly understood that there is a crucial dialectical link that has unified humanity in all eras up to this point:

The Palaeolithic paintings remind us that our present subjection to forces other than nature is purely transitory; these works are a symbol of our future freedom. Today, mankind, amid enormous sacrifices and suffering is, with imperfect awareness, striving for a future in the eyes of which all our history will sink to the level of prehistory. Palaeolithic man was carrying on a comparable struggle. Thus the art most distant from us becomes the nearest; the art most alien to us becomes the closest.

Sean Ledwith is a Counterfire member and Lecturer in History at York College, where he is also UCU branch negotiator. Sean is also a regular contributor to Marx and Philosophy Review of Books and Culture Matters