Like millions of other Italian Americans, I rejoiced in Italy‘s dramatic penalty-kick World Cup victory over France.  For a country that has given us little to cheer about recently, it was a welcome and much-needed celebration, a festival combining benign patriotism, wistful nostalgia, and a release for long-suffering fans. In fact, both the country and […]

We have pledged to help reclaim the honor of the United States of America.  Accordingly, we call for the impeachment of the president of the United States, George W. Bush. Since lying in combat could needlessly cost the lives of fighting men and women, West Point graduates have been trained to live by a code […]

On June 2, a combined force of local, provincial, and federal police arrested 15 young Muslim men, including five minors, in the Toronto area.  Those 15, and two others who have been in jail since last August, are accused of plotting terrorist attacks on various targets in Ontario.  If convicted, they could be sentenced to […]

We mince no words.  Time is of the essence.  Iraq is a human and political catastrophe, stark testament to the deceitful behavior of the Bush administration.  The dangers are clear and present, and too many human beings are dying for an ignoble cause.  The preemptive war launched against Iraq on March 20, 2003 stands illegal […] 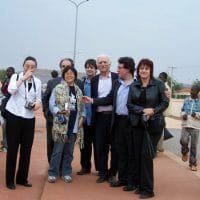 The Bamako Appeal aims at contributing to the emergence of a new popular and historical subject, and at consolidating the gains made at these meetings. It seeks to advance the principle of the right to an equitable existence for everyone; to affirm a collective life of peace, justice and diversity; and to promote the means […]

The Edward R. Murrow movie Good Night, and Good Luck reminded me of one of my most unpleasant — but gutsy, I guess — moments in life. As a newly elected Selectman of Weston, Connecticut, I worried about the growing influence of Mr. McCarthy, his Communist witch-hunt, and kept wishing I had some clout to […]

Who would have ever thought I would still be working as an Administrative Assistant here at the Head Start program in Kittanning, Pennsylvania, 28 years later?  When I started here on February 16, 1977, I was 28 years old, married with two young daughters in elementary school.  My husband was employed, and I thought that […]

Chávez, Venezuela, and the New Latin America is a modest documentary directed by Che Guevara‘s daughter, Aleida Guevara. Through extensive interviews with Hugo Chávez Frías, president of Venezuela, the film chronicles the coming to consciousness of the Latin American leader, describes the U.S.-backed attempt to topple his government, and raises the question of what a […]

The premiere of Robert Greenwald‘s new film, Wal-Mart: The High Cost of Low Price, at Clark University in Worcester, Massachusetts, drew a crowd of nearly two hundred people, far exceeding the expectations of the event’s organizers, who were compelled to run simultaneous showings in two separate rooms. Screenings have taken place at thousands of similar […]

Without much examination of the concept, Americans are quick to declare that they live in a civilized society.  Indeed, many Americans believe that their country is the most “civilized” country in the world.  Without much digression on the arrogance of such a belief, it is sufficient to say that at least the rest of the […]

[Click on the graph to enlarge it.] The data are from the Council of Economic Advisors’ “2005 Economic Report of the President,” Table B-60. James G. Devine is Professor of Economics at Loyola Marymount University. His numerous publications include “The ‘Natural’ Rate of Unemployment” (A Guide to What’s Wrong with Economics, Ed. Edward Fullbrook, London, […]

This idea cannot withstand a nanosecond of thought. The idea that a fixed quantity of work exists, to be parcelled out among workers, is the so-called lump-of-labour fallacy. It is depressing that supposedly responsible governments continue to pretend to be unaware of the old ‘lump of labour’ fallacy: the illusion that the output of an […]