“Hip capital” . . . “Rebel consumers” . . . “Conquest of cool” . . . “Bobos [bourgeois bohemians] in paradise!” Such are the terms used by social critics to ironically sum up the marketing of the counter-culture, a phenomenon that is commonly exemplified by the reduction of one-time “anti-establishment” anthems to a seemingly endless string of commercial soundtracks. While some observers decry the iconography of the “protest generation” falling into the hands of “the enemy” and bemoan the betrayal of another idol from their youth, others suggest that “the Sixties” was essentially an advertising gimmick and maintain that “boomers” are, and always were, hypocrites. Neither outrage nor cynicism, however, helps us understand the past or the present.

Consider the case of Starbucks, a pacesetter in trendy consumption eliciting both scorn and wonder, from Thomas Frank (on “the left”) pointing to the peace symbols that once adorned the walls and windows of its coffee stores to David Brooks (on “the right”) alluding to the difficulty of telling apart the “espresso-sipping artist” and the “cappuccino-gulping banker” that frequent every location. Starbucks, which has become the world’s largest coffee chain, can trace its genesis to the heady counter-cultural days of the late 1960s when three Seattle friends “flipped out” over a Berkeley coffee shop (one feature of which was that the owner hired long-hairs). Several years later, Starbucks was born, a result of these buddies’ desire to provide their hometown with good coffee in a distinctly bohemian atmosphere and of the start-up incentives offered by Seattle local government’s redevelopment of the city’s historic Pike Place Market.

Today, the coffee-giant receives kudos for following a grassroots business model, wins praise for nurturing an employee-friendly workplace, and is honored for promoting socially-responsible commerce. Conversely, the “brand” has been identified with nefarious

forces of globalization, becoming a target of brickbats, both tangible (recall the smashed window and gutted interior of a Seattle Starbucks during the 1999 anti-WTO protests) and intangible, as the name has become ubiquitous.

Starbucks’ meteoric rise has occurred with a minimum of conventional marketing, something with which admirers and critics alike have been fascinated. Starbucks executives regularly proffer the “opinion” that their company’s success has been a largely word-of-mouth phenomenon, a result of the people-friendly products, service, and atmosphere offered. Such claims are, in some sense, true; Starbucks is quite frank that it sells a “coffee experience.” Towards this end, the company touts its stores as a “third place” in their customers’ lives (first is home and second is work), a clean and appropriately-lighted environment where people can “meet up” and chat, “kick back” with good reads, or “surf the web” via their wireless laptops. Thus, Starbucks is the kind of place about which folks tell their family, friends, and colleagues.

While Starbucks has never aired television commercials for its stores, the company has run national TV campaigns for specific drinks sold in partnership with Pepsi. One ad featured a doo-wop singing group backing up “Stacey” as she ignores her boss and office-mates in favor of a chilled “Frappuccino” in-a-bottle. Meanwhile, viewers are informed that “work can wait.” In a second spot, ’80s hair-band Survivor retreads its hit song “Eye of the Tiger” from the Rocky III soundtrack as “Glen” gets ready to meet the work-a-day office world with a canned “Double Shot” espresso energy drink. New lyrics tell of the guy’s potential to reach “middle management” and become a “supervisor” someday. The company’s mermaid (or is it a siren?) logo fades in and out as the commercials close. Essentially music videos — which are, themselves, commercials for recorded music and musicians — the ads reflect a “hip” style of product promotion that alternately rejects blatant sales appeals believed to disrupt and interrupt program viewing or makes its sales pitch an ironic one allowing the audience to be in on the joke, as in the “Glen” advert. The approach has worked for both new companies and novel products that generate a “buzz” as well as for “brands” already embedded in the culture at large.

Starbucks’ status as “embedded brand” addresses an important point about the company’s self-identity; its fabled “anti-advertising” posture belies the fact that it has been at the forefront of “new” marketing strategies. Starbucks has led the way in commercial “placement” whereby companies pay to have products “show up” in films and on TV shows. Consider the prominence of Starbucks in the Austin Powers flicks, and the movies Miss Congeniality and I Am Sam (to name only a few of many “appearances”), as well as in the Ally McBeal and West Wing television series. Visibility comes in three forms: scenes shot on location in Starbucks stores, Starbucks cups as props for characters, and Starbucks exteriors as set dressing and background. 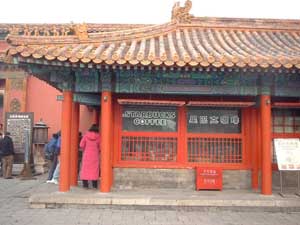 The company has also promoted itself through “location saturation”; upon deciding to open somewhere, particularly in dense urban downtowns, Starbucks will place several stores within close proximity, even across the street from one another. This strategy serves multiple purposes: it offers customer convenience, it overwhelms existing local cafes and shops, and it facilitates the company logo becoming a pervasive feature in people’s lives. Thus, Starbucks expansion is simultaneous advertising (and because each store is part of a chain rather than a franchised entity, the company may be willing to lose money for a time at one site to drive a competitor out of business).

Every business magazine and website in recent years seems to have touted the benefits that Starbucks workers “receive” from their employer. The company ranks 11th on the Fortune “100 Best Companies to Work For” list; it sits at number two among retailers. And, compared to fast-food as a whole, these employees (whom the company calls “partners”) have a “pretty good deal.” Too often, however, those issuing laurels tell only a portion of the story; for example, the fact that two-thirds of Starbucks’ labor force is comprised of part-time employment receives little attention, Yes, employees working 20 hours per week can qualify for medical-benefits, but — and this is a big but — they have no guarantee of such hours, they must maintain a weekly average of 20 hours each quarter (three months) to remain eligible, and they must foot 25% of the cost of their premiums, no simple task given that counter-worker “baristas” generally start at about $1 above the prevailing minimum-wage. Low-pay also leaves few funds available to make contributions to a 401(K) savings plan that the company offers. Moreover, the company’s employee-stock plan also turns out to confer less than meets the eye. Employees do not actually own “Bean Stock” (Starbucks’ term for the stock that it distributes to employees each year commensurate to 14% of their wages); they must cash in after five years, at which time they can keep whatever appreciation has accrued in the stock’s value.

Starbucks made a splash in 2000 when, under pressure from a well-orchestrated activist campaign, it agreed to sell certified “fair trade” coffee at some of its U.S. outlets. The sheer quantity of product that the company buys meant a 100% increase in Fair Trade stores across the country. Once again, however, image may be more agreeable than substance. To begin with, only about 2 million of the 100 million yearly pounds of coffee that Starbucks buys is certified, despite the fact that there exists but a $.06 per-pound differential between what “certified” beans guarantee farmers ($1.26) and what the company claims to pay ($1.20) for its specialty brews. Additionally, Starbucks only sells “whole bean” Fair Trade coffee, having decided to stop offering Fair Trade as a “java of the day” on grounds that limited demand made brewing individual cups too expensive. Both the few “certified” one-pound packages on store shelves and the absence of brochures on store counters informing customers about “fair trade” coffee testify to the company’s reduced interest and concern.

On the marketing front, Starbucks has recently repeated the “Glen” theme with a “Hank” advert, using Gary Glitter’s “Rock and Roll, Part 2” — probably better known as the “Hey Song” routinely played at sporting events to stir home team fans. Here, the crowd shouts “Ba Na Na Na Na — Hank — Ba Na Na Na” as he downs a “Double Shot.” A second “Frappucino” spot has an attractive blonde woman removing a cold bottle from a “break room” fridge as a nerdy-looking Asian guy — complete with Elvis Costello-like glasses — metamorphoses into a white crooner singing Frank Sinatra’s “Come Fly With Me.” Despite its stereotypical portrayal of a desexualized Asian male and its racist privileging of whiteness, the ad has generated little controversy. Moreover, the commercial functions much like a seamless thread: people “discover” singer Michael Buhle through the Starbucks advert; a Google search of his name then directs the curious to the company’s website, which highlights that his second release is available at Starbucks as an exclusive-edition CD with the tune from the ad as a bonus track (Starbucks stores have been selling specially-packaged compilations and certain “big name” act releases for a number of years). While at the website, these same persons learn — if they don’t already know — that the company has launched a music division. On one hand, “Hear Music” will negotiate licensing agreements with recording companies allowing customers to “burn” and purchase personalized CDs in locations that Starbucks is calling “music coffee-houses” and “media bars.” On the other hand, the division will produce and market new recordings; the initial release, Ray Charles’ final recording before his death, “Genius Loves Company,” has sold almost 3 million copies (of which about 25% were bought in Starbucks stores).

What can Starbucks tell us? In a nutshell, contemporary “counter-cultures” — cultures that are not counter to anything but are in fact part and parcel of the dominant culture sold over the counter everywhere — are merely attempts to stylishly wed Adam Smith’s “homo economicus” theory of markets in The Wealth of Nations with a regard one should have for others that Smith expresses in The Theory of Moral Sentiments — in other words, capitalism with a “humane face” that leaves one “feeling groovy.”

In contrast, the counter-cultural milieu from which the likes of Starbucks emerged signaled, in profound and articulate as well as superficial and incoherent ways, the possibility of a better world, though it was also exceedingly entrepreneurial, its creative ideas generating alternative marketplaces and avant-garde merchandise, which would later become some of the most “cutting-edge” means of re-entering and then advancing in the old one. Those who feel betrayed by the marketing of the counter-culture forget the latter; those who cynically assume that “the Sixties” was nothing but an incubator of Starbucks and its ilks do not want to be reminded of the former. Dramatic metaphors of generational frauds, individual turncoats, and corporate machinations, emotionally satisfying as they may be, only prevent us from dispelling the half-truths told by the willfully oblivious.

Starbucks: In its Own (and Others’) Words

Michael Hoover is a professor of political science at Seminole Community College in Central. Florida. He is the author (with Lisa Odham Stokes) of City on Fire: Hong Kong Cinema.