Local government initiatives to deal with housing and community development issues coincided with the expansion of industrial capitalism in the late 19th century.  New York City became the first to enact building codes following a cholera epidemic (the city’s third since 1832) that spread through working-class neighborhoods in the 1860s.  A half century later, most cities had passed ordinances establishing dwelling size minimums, regulating utilities (electric and plumbing), and requiring trash disposal.  Additionally, municipalities began to adopt zoning regulations, in effect, dividing cities into areas intended for specific purposes.  From their origins, zoning codes protected residential, upper-class and middle-stratum single-family neighborhoods from low-income apartments, factories, and other “undesirable” uses.  In general, zoning followed “grid” planning — to which projects in the U.S. modeled on Haussmann‘s great Parisian boulevards were a response — in attempting to facilitate real estate markets.

New York City was also the first US municipality to enact a comprehensive zoning law, doing so in 1916.  Local real estate interests, motivated by a desire to protect valuable property by segregating “better” and “lesser” uses, converged with wealthy residents who wanted stable land values that could be sheltered from threats posed by working persons “around the corner.”  The New York ordinance created a five zone hierarchy with differences based on land use and value.  Residential was accorded highest priority; business (distinguished by building height, with taller structures considered less desirable) followed; warehouse and industrial were at the bottom.  Real estate concerns in state after state lobbied for similar legislation granting cities the authority to zone.  When empowered to do so, cities essentially copied Gotham’s ordinance.  In 1924, the federal government signaled its endorsement when the U.S. Department of Commerce under Secretary Herbert Hoover issued a A Standard State Zoning Enabling Act.

The issue of zoning — which so-called “progressive reformers” seeking to rationalize urban growth also promoted — would eventually be taken up by the U.S. Supreme Court, not surprising in a nation where political matters are often transformed into “legal” ones.  In this instance, the case of Village of Euclid v Ambler Realty (1926) involved a Cleveland, Ohio suburb that had zoned commercial/industrial a tract of land running between two railroad lines.  A local real estate firm sued, alleging adverse effects to its property-holdings.  Upset that it did not receive a “residential use” classification and the subsequent higher land values associated with it, the company argued that its “due process” rights had been violated.  Rejecting the property rights claim, a six-justice majority upheld zoning as a constitutional use of local government authority.  Reversing a lower court’s denial of such power, the High Court also gave its stamp of approval to exclusionary zoning, which became the chief tool that municipalities used to drive up housing construction costs and keep low-income people out of communities.  In this regard, the reformers were no less discriminating.

In the post-World War II era, zoning would become identified with “white” suburbs throughout the country.  Many newly-incorporated municipalities adopted large lot and big house-size minimums as well as costly building material and compulsory “amenity” requirements (such as a garage) to both force home prices up and prevent rental apartment construction.  The intent of most zoning ordinances may well have been social class discrimination, but their effect was racially discriminatory as well.  Of course, in some places, the motivation to exclude was racial.  Circumstances like those in Birmingham, Michigan, for example, were repeated in every state: white, upper-middle income residents assuming that affordable housing meant poor blacks and other racial minorities, initiated a recall of city council members who approved a low-income housing plan, voted out incumbents who had supported the project, and overwhelmingly rejected a ballot measure on the matter.

The 1970s witnessed a spate of legal battles that had potential implications for the future of zoning.  In 1971, Lackawanna, New York, officials lost their attempt to stop a low-income housing development when a federal appeals court ruled that to do so would constitute racial discrimination (Kennedy-Park Homes Association v City of Lackawanna).  Then, in Park View Heights Corp. v Black Jack (1974), a U.S. appellate court agreed with plaintiffs about the racially biased effects of Black Jack Missouri — granted incorporation by St. Louis County in the face of federally subsidized housing — zoning even as it differed with them about the policy’s racially-biased intentions (lapsed funding and escalating building costs fueled by the decade’s economic inflation eventually doomed the project anyway).  However, three years later, the U.S. Supreme Court decision in Arlington Heights v Metropolitan Housing Corp. (1977) limited the likelihood of successful racial discrimination zoning lawsuits.  Justice Lewis Powell, writing for a 5-3 majority (John Paul Stevens did not participate in the case), held that plaintiffs must prove racial intent in order to receive relief from the Court.

Meanwhile, civil rights campaigners, community activists, and affordable housing advocates were buoyed by a 1975 New Jersey Supreme Court judgment in Southern Burlington County NAACP v Township of Mount Laurel.  Not only did the court deny a town the authority to “zone out” low-income housing, its sweeping ruling mandated that every local government comprehensive plan in the state had to “include” such residences.  Thus the concept of inclusionary zoning was introduced whereby regulations provide a range of density levels and building types.  In 1985, the New Jersey legislature established a statewide council for the purpose of working out a “fair share” program for the locating of small lot houses and multi-residential units.  Unfortunately, implementation of the decision has been beset by three decades of legal wrangling involving an additional ten court cases.

A number of states have legislation on their books encouraging and permitting a mix of housing in new developments.  In response, about 200 communities (half of which are in California) have enacted some type of “inclusionary zoning,” including some of the more affluent areas in the country such as Montgomery County, Maryland.  Most of this zoning is voluntary; local government offers incentives such as density bonuses, variances, public land and/or funds, tax relief and walk-through permit approvals (instead of the customary 18 month minimum).  Elected officials tend to prefer this approach for several reasons, among them ideological; additionally, there remains a good deal of middle- and upper-middle income opposition to “mixed” housing stock.  Finally, voluntary compliance lessens the probability of “takings” and “due process” court challenges.  One consequence, however, is low developer participation.  In contrast, the relatively few mandatory (whether compensated or not) programs that exist both increase developer participation and heighten potential legal objections.  To discourage the latter, local jurisdictions often allow developers to “opt out” by precluding them from seeking variances, using public land, or relying upon public funds.

Inclusionary zoning — together with adoption of measures such as environmental regulation ordinances, infrastructure exactions (i.e., land set aside for a park or school), and impact fees — in the face of real estate and developer opposition makes local political elites anxious.  The current fashion is for development interests and local officials to sign agreements that satisfy both planners who want to be able to specify details of a project and developers who get binding contracts that cannot be changed later on.  Of course, there are locales with strong traditions of civic activism, places where business is not the unchallenged dominant interest, where community and neighborhood groups can have some influence.  In such settings, policies curbing conversion of apartments into condos as well as earmarking some percentage of space in new development for low- and moderate-income housing have been enacted.  Too often, however, the class and race demographics of “zoning politics” suggest that something other than democracy is going on (even larger, better-financed firms will support certain policies as a means of forcing smaller competitors out of the market).  When local residents successfully stop a re-zoning decision or block construction of a project wanted by a city’s business leaders, it frequently happens in relatively affluent communities where “land management” proponents and NIMBY-types regard growth as a threat to their quality of life. 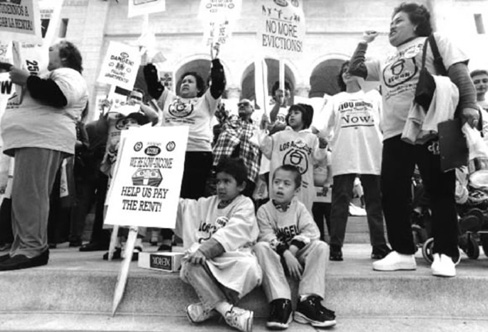 ACORN Demonstrates: The Struggle for a Housing Trust Fund and Inclusionary Zoning

Today, there exist frameworks for the participation of low-income and neighborhood groups in most U.S. cities.  Because of the legacy of (now-largely dormant) militant community activism, citizens have opportunities to get involved through various organizations and boards.  While certain real changes do occur, the segmented policy environment, the composition of most local governing coalitions, and the isolation of neighborhoods and groups from many important decisions of public (and quasi-public) institutions present serious obstacles.  Because powerful private interests are usually the principal political forces, low-income and neighborhood constituencies and their representatives can find themselves outside looking in on a process that is never neutral.  Moreover, electing “good” candidates doesn’t change the dependence that as officeholders these people will have on prevailing financial power.  Simply put, local governing coalitions generally look quite different than electoral coalitions.  The resulting politics of exclusion is like a sign reading “zoned out!”

In the US, housing policy has reflected an ostensible desire to address a social problem by providing financial assistance to private-sector institutions.  As the late-Wisconsin Democratic Senator William Proxmire (who, among other things had the distinction of filling the remainder of Joe McCarthy’s term when the latter died), said admiringly of federal housing legislation, it stressed private enterprise and private development and left basic investment decisions to the private sector.  Given that so many large public investments are controlled by independent state and regional authorities as well as the fact that large portions of community development budgets go for conventional capital expenditures, there is little discretion left.  At best, low-income and neighborhood interests are looking at small amounts of residential-area money.  Therefore, such constituencies and their representatives find themselves as one part — and a comparatively weak one most of the time — of the politics of exclusion.

Michael Hoover is a professor of political science at Seminole Community College. Hoover co-authored City on Fire: Hong Kong Cinema. with Lisa Odham Stokes. Hoover serves on the editorial board of New Political Science, journal of the caucus for a new political science.