“That lying bastard, George Bush, is taking a five-week vacation in time of war,” Cindy Sheehan told 200 cheering members of Veterans for Peace at their annual convention in Dallas last Friday evening. She then announced she would go to Bush’s vacation home in nearby Crawford, Texas and camp out until he “tells me why my son died in Iraq. I’ve got the whole month of August off, and so does he.”

Sheehan left the VFP meeting on Saturday morning and is now in Crawford with a couple dozen veterans and local peace activists, waiting for Bush to talk with her. She said in Dallas that if he sent anyone else to see her, (as he sent national security adviser Steve Hadley and deputy White House chief of staff Joe Hagin later that day), she would demand that “You get that maniac out here to talk with me in person.” 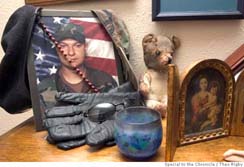 She told the audience of veterans from World War Two to today’s war in Iraq, that the two main things she plans to tell the man she holds responsible for son Casey’s death are “Quit saying that U.S. troops died for a noble cause in Iraq, unless you say, ‘well, except for Casey Sheehan.’ Don’t you dare spill any more blood in Casey’s name. You do not have permission to use my son’s name.” 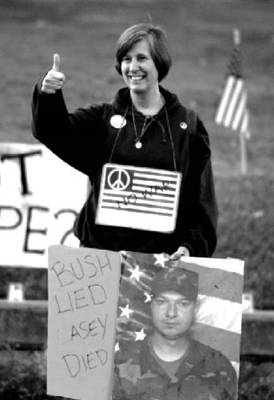 “And the other thing I want him to tell me is ‘just what was the noble cause Casey died for?’ Was it freedom and democracy? Bullshit! He died for oil. He died to make your friends richer. He died to expand American imperialism in the Middle East. We’re not freer here, thanks to your PATRIOT Act. Iraq is not free. You get America out of Iraq and Israel out of Palestine and you’ll stop the terrorism,” she exclaimed.

“There, I used the ‘I’ word — imperialism,” the 48 year-old mother quipped. “And now I’m going to use another ‘I’ word — impeachment — because we cannot have these people pardoned. They need to be tried on war crimes and go to jail.”

As the veterans in Dallas rose to their feet, Sheehan said defiantly, “My son was killed in 2004. I am not paying my taxes for 2004. You killed my son, George Bush, and I don’t owe you a penny . . . you give my son back and I’ll pay my taxes. Come after me (for back taxes) and we’ll put this war on trial.”

The co-founder of Gold Star Mothers for Peace objected to hearing that her son was among the soldiers lost in Iraq. “He’s not lost,” she said tearfully. “He’s dead. He became an angel while I was sleeping.” 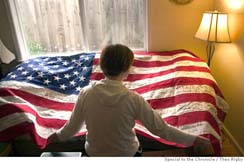 She railed against the notion expressed by officials in the Bush administration that bringing the troops home now would dishonor the sacrifice of those who have died. “By sending honorable people to die, they so dishonor themselves. They say we must complete our mission . . . but why would I want one more mother to go through what I have, just because my son is dead?”

The Vacaville, California resident said she first heard of Veterans for Peace in early May last year, during a CNN report about an exhibit of white crosses arranged in rows in the Santa Barbara beach. The exhibit was organized by VFP Chapter 54 to memorialize each U.S. soldier killed in Iraq. Her son had died the month before. “I decided there was only one place I wanted to be on Mother’s Day that year, and it was Santa Barbara,” she told the VFP members in Dallas. 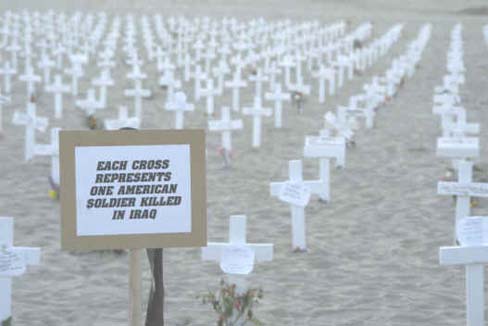 Retired Special Forces Sgt. and VFP member, Stan Goff, today initiated a “Talk to Cindy” campaign to get Bush to meet with Sheehan. Contact information for the White House is: (202) 456-1111 or <comments@whitehouse.gov>.

Mike Ferner is a writer in Toledo, Ohio and a member of Veterans for Peace. He can be reached at <mike.ferner@sbcglobal.net>.