New York Times Op-Ed columnist Thomas Friedman is lucky I don’t have his phone number. If I did, I would call and tell him that the “tipping points” in the Middle East never tipped. The Bush administration presented a well-scripted farce to its consummate lapdogs in the media; and Friedman, along with his more conservative cronies, fed it directly to the public.

The President’s enablers would have us believe the first tipping point, the “liberation” of Iraq, was reached via elections. The message was clear: the destroyers of democracy and their terrorist ways were being crushed by the victory of the “greater Bush vision” of “free elections.” Yet most in the US press — “liberals” like Friedman as well as neoconservatives — forgot exactly why the tipping point would never tip. The insurgency had not been quashed, security was non-existent, the interim government was a failure, and the new elections were muddled by an indefinite American occupation. Now, common sense told us the neocons were going to claim victory for the elections either way, but who told the “liberals” in the media to push Karl Rove’s agenda? It took just weeks for reality to set back in. The prolonged insurgency shattered the hopes of the New York Times finding harmony in Iraq, and the constant suffering of Iraqis without jobs, electricity, or medical care came back to the forefront. Sadly, it took this much time and thousands of lives for a few senate Republicans to start calling for an exit plan for the war.

The Palestinian elections were another absurd tipping point in the self-indulgent mind of Thomas Friedman. When Abu Mazen became President of the Palestinian Authority, the White House and the media proclaimed the Israelis and Palestinians were going to pick up where the Camp David negotiations left off. With the tame Abu Mazen in power, and the boogeyman, Yasser Arafat, dead and gone, cutting a deal was going to be easier than slicing bread.

As Americans were passing out candy in the streets, the Palestinians were living in reality, better known as occupation. At first, the Palestinian public stayed calm in hopes of better living conditions, and resistance groups such as Hamas and Islamic Jihad complied with the Israeli/Palestinian ceasefire. I am not much of a cackler, but when I heard about Ariel Sharon’s “design for peace,” I could not resist. Not surprisingly, the Sharon administration continued to annex Palestinian land, issued edicts to destroy homes, carried out assassinations, arbitrarily arrested Palestinians, further controlled the water supply, and restricted the movement of anyone traveling throughout the Occupied Territories. Like the calm in Iraq, it was only time before Islamic Jihad and the Al Aqsa Martyrs Brigade pulled out of the ceasefire, sporadic clashes began between resistance groups and the government, and the Palestinian Authority lost credibility and control of the land it now “governed.” 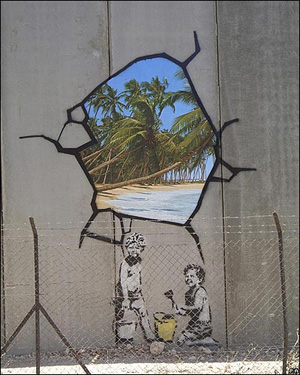 As for the pullout of Gaza, it has come to a tipping point of chaos, with settler protests and violent actions against Israeli soldiers, and daily attacks on Palestinians, including beatings and attempted lynchings. The most troubling part of this joyous victory is Prime Minister Ariel Sharon’s reaffirmation that he will use the withdrawal from Gaza as a ploy to strengthen the Israeli grip on the West Bank. Sharon will accomplish his goal by completing the Apartheid Wall, which dissects and appropriates Palestinian land, and by expanding the current settlements, which further displaces the indigenous Palestinian population. I wonder how Thomas Friedman thinks the Palestinians will stomach this? Maybe with a side of Hummus?

The next case in point is Lebanon. Back in February, the Bush administration declared the elections in Iraq were encouraging protests in Lebanon after the murder of former Prime Minister Rafik al-Hariri. This sneaky rhetoric was intended to strengthen “the necessity” for occupation in Iraq and bolster Washington’s anti-Syrian rhetoric. The same type of nonsense spread across the pages of the New York Times, Thomas Friedman being its biggest mouthpiece. Friedman insisted that the world was witnessing “two nearby tipping points,” in reference to the demonstrations in Lebanon and the pullout of the Gaza Strip. He breezily claimed the situations were “both triggered by Iraq and will reinforce Iraq.” The editor-in-chief of the Lebanese newspaper The Daily Star, however, balked at the suggestion that American influence in Iraq led to strong protests against Syria. Polls have overwhelmingly shown that Iraq was not a reason for the Lebanese uprising. The majority of Lebanese view the situation in Iraq as an occupation — not a liberation, contrary to the popular belief that American “freedom fries” spread like wildfire on the French-influenced streets of Beirut. As things stand, pro-Syrian President Emile Lahoud will serve the remaining two years of his extended term, and pro-Syrian Nabih Berri was re-elected for a fourth term as speaker of parliament with the support of the anti-Syrian opposition. On top of all this, the White House also has had to come to terms with the fact that Hizb Allah, a Lebanese resistance group, is not disarming or disbanding.

But what about Egypt and Saudi Arabia? Egypt, close ally and top US aid recipient, is going to have free and fair elections! No. Wait. That is not true either. Egyptian President Hosni Mubarak plans on staying put, and when you have the dictatorial authority he does, filtering out any credible challenge to the throne is easy. As for reform in Saudi Arabia, as long as the Saudi royals give the US oil at a price that can’t be beat, they have no reason to listen to other countries telling them what to do. The Saudi rulers will heed the cries in society only when they have to — otherwise, they will just try to keep the happy medium between those who want reform and those who want to keep the status quo.

As we have seen, “Western democracy” isn’t flourishing in the Middle East mainly because you can’t force a way of life on another people. Just because Thomas Friedman says the world is flat, it doesn’t make it so, no matter how many anecdotes of wannabe- American-yuppies in Bangalore he includes in his colum. The lies and failures of the Bush administration are staggering, but, predictably, the mainstream press bought them all — hook, line, and sinker. It’s what the corporate media in America, full of people like Friedman, do best: they hop on any train as long as it departs with Presidential fanfare, but the only place the train ends up taking them is another imaginary “tipping point.”