Kenneth Burt is the political director of the California Federation of Teachers. He has worked for a number of unions and elected officials, including former California Assembly Speaker Willie Brown. He is a product of Harvard University and the University of California at Berkeley, where he returned to be a visiting scholar. Burt has written a number of academic articles and is working on a book on Latino politics.

Q: What is the California Federation of Teachers? Give us a few details about the membership.

The California Federation of Teachers, or CFT, is the AFL-CIO union for educators in California. It is the state affiliate to the 1.3-million member American Federation of Teachers. Locals bargain for roughly 100,000 members in a variety of settings. CFT represent faculty and classified workers in public and private schools and colleges, early childhood through higher education. This has led to very holistic look at what works and what is not working in public education. CFT also has a long tradition of progressive political activity. This includes early support for the United Farm Workers, fighting a series of anti-minority voter initiatives, and in the last election, backing Proposition 72 to expand the number of people who have access to health insurance, as a step to universal coverage.

Q: What is the main labor issue for the organization?

The big issue now is responding to Governor Schwarzenegger’s attacks on working families. California is in the front line in the right wing’s attempt to roll back the New Deal safety net. They are also seeking to silence the voice of working families by targeting public employee unions, which are a powerful force within the larger progressive coalition and the California Democratic Party.

The governor has just called a special election for November 8, 2005. California, unlike most states, allows for voter referendums called initiatives or propositions. The governor and his corporate allies have placed several very dangerous issues on the ballot. One would further reduce state spending, cutting the money for schools and colleges, and a host of social programs, such as health care for poor children.

The governor is also specifically targeting teachers. Most workers have employees rights after 90 days, but this governor has an initiative to make it possible to fire teachers without due process for five years after hiring. It’s just mean-spirited — and it does nothing to improve the quality of education.

If all of this wasn’t bad enough, the governor and his corporate allies are likely to spend more than $100 million to push their right-wing agenda. It’s going to be the biggest political fight ever seen short of a presidential election.

Despite the enormity of the fight, labor will be ready. Teachers, firefighters and nurses regularly picket the governor. More than 30,000 attended rallies in Sacramento and Los Angeles. 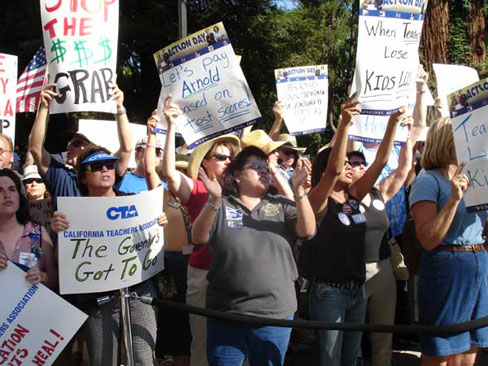 And because this is California, the coalition has been running television commercials pointing out that the governor broke his promise to fully fund the schools, and that he is attacking working families. It has started to work. The Hollywood luster is off the governor, whose poll numbers have dropped below 50 percent. But he’s still dangerous.

Q: What accounts for CFT’s ability to mobilize its members?

The issues are huge. Our members recognize that they have a lot at stake, both as educators and workers, and as part of a larger society that needs to care for children and for working families.

Q: What are some key factors concerning the growth and organization of the CFT?

CFT continues to grow. In the last month we became the exclusive bargaining representative for the faculty at the Mendocino Community College District on the north coast. We picked up some additional adult educators in the San Jose area. We are also organizing in the private sector. This includes the San Francisco Job Corps, the Palmer College of Chiropractic in the San Jose area, and the Alliant University in several cities.

CFT’s organizing campaigns do not draw a lot of public attention, but our growth is consistent. Bringing in new members also serves to rejuvenate longtime activists.

Q: Please explain any alliances that the CFT has with other labor unions, and some of the outcomes.

CFT is part of many coalitions. This includes the Education Coalition, and a pension coalition, and we sit on the executive council of the mega-coalition, the Alliance for a Better California, that is leading the fight against the governor in the November 2005 special election. We also work with other unions, and with Central Labor Councils, to elect candidates to school and college boards and to the state legislature. We have a great track record. That is one reason why the governor has declared war on public employees and their unions in California.

Q: What are the plans and prospects for the CFT for the remainder of 2005?

We are playing both defense and offense. We are mobilizing to fight Governor Schwarzenegger’s attacks on educators and his effort to silence the voice of working families. CFT also became the first statewide union to endorse Democrat Phil Angelides for governor in the 2006 election. He is the anti-Arnold. Angelides also has a progressive vision for a high road to prosperity for all.

Seth Sandronsky is a member of Sacramento Area Peace Action and a co-editor with Because People Matter, Sacramento’s progressive paper.