Prime Minister Ariel Sharon, a military man turned “peacenik,” is unilaterally “disengaging” from the Gaza Strip. It’s all over television, play by play — the hardship Israel is enduring. 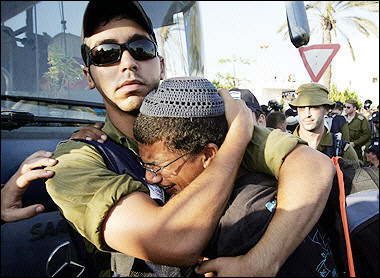 Scenes of Israeli soldiers emotionally and physically struggling to remove the 8,500 settlers from the Gaza Strip are displayed while CNN anchors utter soft words in hushed tones in the background. The Israeli government has spent billions to protect and provide for the settlers. Now, Israeli soldiers must painstakingly carry off the flailing settlers who are still protesting the move — the same soldiers to whom they once turned for help.

Should Israel be commended for dismantling the illegal settlements they built against international law, the will of the Palestinian people, and the effort to maintain peace? The corporate media’s melodramatic portrayal, with close-ups of tears on the faces of settlers, would have the viewer believe that this is a major sacrifice on their part. The media are silent on a minor fact that the settlers had trampled on the rights of an indigenous people — that they had lived in their fortresses of Israeli luxury in the desert of Palestinian impoverishment.

The settlers’ departure from Gaza is indeed historic. Yet, it is not disengagement in the proper sense of the word, notwithstanding the corporate media’s terminology. Gazan children may be able to play in the yard and Gazan wives and husbands can walk the street freely, but unfortunately their freedom ends there. Israel will control Gaza’s air, sea, and borders as well as the movement of Palestinians entering or leaving Gaza. The dream of contiguous Palestinian territory is left a dream. As predicted, Gaza will remain an open-air prison, overseen by its neighbor who continues to hold its keys. Former settlers from Gaza will be making their way to lush West Bank territory, shortly after an estimated $150,000 to $400,000 per family is doled out to them — with America footing the bill, of course. Armed with unlimited housing permits granted by the Israeli government, they will encroach upon more Palestinian land and displace more Palestinians, who are denied housing permits by the same government, while the world watches indifferently.

Besides, even if Israel “disengaged” from not just the Gaza Strip but the West Bank and East Jerusalem, that alone wouldn’t solve the main problem for most Palestinians. The quality of life in Palestinian society is the fundamental issue. Will “disengagement” have a positive effect on the 80 percent of Palestinians who are living below the poverty line, the 60 percent who are unemployed, or the flow of products in and out of the Palestinian territories? The simple answer is no. The constraints on Palestinian life that Israel vows to keep will further deteriorate the economic conditions of the “disengaged” Gaza strip.

Palestinians initially accepted the Oslo Accords because they were tired of violence. Furthermore, promises of a state of their own were made, and the quality of life for their families seemed to be improving. As the world witnessed, however, quite the contrary occurred. The transfer of power to the Palestinians was slow at best, Israeli incursions continued regularly, and settlements expanded at an unprecedented rate. The removal of illegal settlers from Gaza is welcome, but, if Israel continues to control vital aspects of Palestinian life and the Gazan economy, how long will the Palestinian people accept the “disengagement”? As I watch the latest Fox News coverage of “disengagement,” I am inundated by images of the Israeli heartbreak. Settlers with tears in their eyes must leave behind the easy life they once lived in their “promised land.” The images cannot but make me wonder: Where are the pictures, film footage, and sound bites of Gazans who have lost their homes because of the dispossessions of 1948 and 1967, the construction of the Annexation Wall, and thousands of house demolitions? Where are the cameras covering the closures, the curfews, and the attacks on Palestinian homes and their livestock? Who is documenting their tears and struggle? Unfortunately, it won’t be Palestinian journalists, who can’t get permits by Israel to cover the atrocities in the territories.

Flipping to CNN, I see unarmed Israeli soldiers under “vicious” attack by settlers equipped with buckets of oil and eggs, swinging fists and legs. I only wish the Israeli soldiers treated the Palestinian people in the same way they did the settlers. I wonder what the family members of the three Palestinians killed by a settler in the West Bank are thinking. That settler took a gun away from a soldier and killed three people, but he was not shot dead — only arrested. Yet, when an eleven-year-old Palestinian boy in Rafah throws a rock that doesn’t come within 50 yards of a tank, he is sniped in the head. . . . Each scene of an Israeli heartbreak on TV reminds me of myriad Palestinian heartbreaks, invisible to Americans who are watching the same news.

The “disengagement” satisfies the West, but the Palestinians living in Gaza face a harsh reality. The Israeli soldiers are still in sight, and the Israeli government is still pulling the strings of their lives. All Gazans can do is to brace themselves for Israeli reinvasions made easier once the settlements are out of the way.