“In vain do I try to soar in fancy and imagination above the dull reality around me but beyond the roof of the factory I cannot rise.” — anonymous Lowell Mill worker, 1826

Lowell, Massachusetts was named after the wealthy Lowell family. They owned numerous textile mills, which attracted the unmarried daughters of New England farmers. These young girls worked in the mills and lived in supervised dormitories. On average, a Lowell Mill Girl worked for three years before leaving to marry. Living and working together often forged a camaraderie that would later find an unexpected outlet.

What had the potential to become a relatively agreeable system for all involved was predictably exploited for mill owners’ gain. The young workers toiled under poor conditions for long hours only to return to dormitories that offered strict dress codes, lousy meals, and were ruled by matrons with an iron fist. 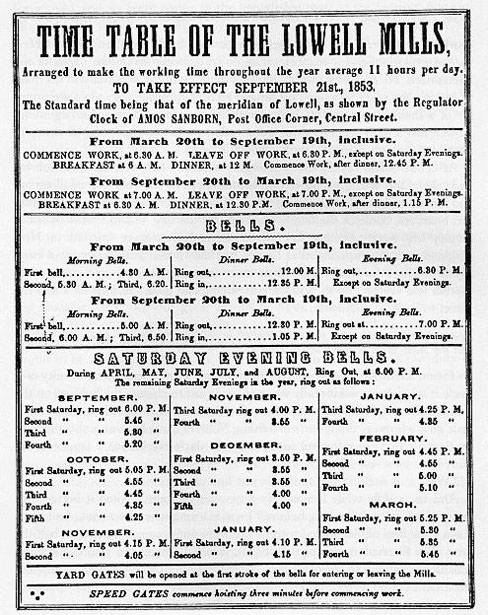 In response, the Lowell mill workers — some as young as eleven — did something revolutionary: the tight-knit group of girls and women organized a union. They marched and demonstrated against a 15 percent cut in their wages and for better conditions . . . including the institution of a ten-hour workday. They started newspapers. They proclaimed: “Union is power.” They went on
strike.

As the movement spread through other Massachusetts mill towns, some 500 workers united to form the Lowell Female Labor Reform Association (LFLRA) in 1844 . . . the first organization of American working women to bargain collectively for better conditions and higher pay. Sarah Bagley was named the LFLRA’s first president and she promptly led a petition-drive that forced the Massachusetts legislature to investigate conditions in the mills. Bagley not only fought to improve physical conditions, she argued that the female workers “lacked sufficient time to improve their minds,” something
she considered “essential for laborers in a republic.”

As with many revolutionary notions, the LFLRA met much opposition in their efforts. Despite their inability to secure the specific changes they demanded, the Lowell Mill Girls laid a foundation for female involvement and leadership in the soon-to-explode American labor movement and they continue to inspire those who stand against injustice today.