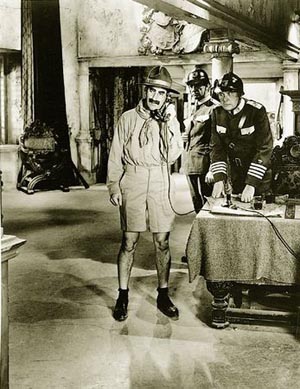 Since quoting Marx makes a writer appear both more educated and more serious, I figured I’d start this piece about Iran with a bit of Marxism . . . from Duck Soup.

Ambassador Trentino: “I am willing to do anything to prevent this war.”

Now, I’m not trying to imply the reasons America goes to war are this frivolous, but . . . WMDs?  Hussein connected to 9/11?  Spreading democracy?  Even Harpo would be laughing out loud.

The U.S. has a long history of conjuring up dubious rationales to wage war . . . and this goes for those on both sides of the proverbial aisle.  During the 2004 presidential campaign, for example, Senator John F. Kerry declared: “The United States of America never goes to war because we want to; we only go to war because we have to.”

Can someone ask Harpo to quiet down?

“He started it” or “She hit me first.”  It’s an excuse we all learn in childhood.  By portraying oneself as the target — or potential target — of an unprovoked sneak attack, all bases are covered.  As George W. Bush explained on March 17, 2003, the night he gave Saddam Hussein a final ultimatum, “The United States and other nations did nothing to deserve or invite this threat, but we will do everything to defeat it.”

More Marx: “Who are you going to believe, me or your own eyes?”

Our history books and newspaper headlines portray an ever-benevolent U.S. minding its own business yet incessantly awakened by surprise events and unprovoked threats that test its celebrated patience, e.g. the sinking of the Maine, the “surprise” attack on Pearl Harbor, and too many others to detail here.

Now we have Iran . . . a nation with the audacity to make decisions without first asking for U.S. permission.  We are faced with the spectacle of America (the only nation to have used nuclear weapons on civilians) warning the world about how nuclear weapons might, well, be used on civilians.  We can’t allow just anyone to sneak around and acquire such technology (well, except Israel).  We can’t allow those Commie Chinese (Cold War II, anyone?) to arm men so evil they might, well, use nuclear weapons on civilians.  Before you know it, Iran will be using depleted uranium and white phosphorous, setting up interrogation centers in Europe and abusing prisoners, spying on its own people, and fixing elections at home and abroad.

As Marx explained, “Military intelligence is a contradiction in terms.”

Mickey Z. is the author of several books, most recently 50 American Revolutions You’re Not Supposed to Know: Reclaiming American Patriotism (Disinformation Books). He can be found on the Web at
http://www.mickeyz.net.