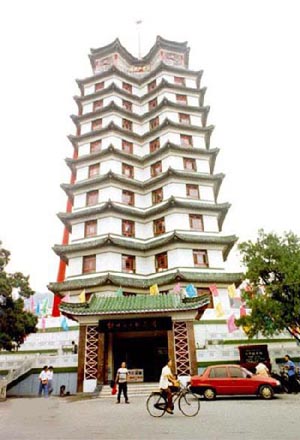 It had been five years since I last set foot in China as a graduate student doing research on Chinese workers’ protests of privatization in Zhengzhou City, the (ironic) site of the February 7th incident memorial that commemorates the repression of the first general strike against colonial administrators of the rail system in 19231  In 2000, it took no small amount of work to find intellectuals — forget activists — who were interested in the contemporary Chinese workers movement.  It was even more difficult to find critics of neo-liberalism, aside from a few intellectuals in Beijing who constituted a then weak left-wing seemingly drowning in a fierce sea of globalization worship. How much difference five years has made!

This time around, I was participating in a conference sponsored by the newly established Workers and Labor Research Institute of Peking University on the topic of Labor Participation and Workplace Governance. The conference addressed itself primarily to the role of democratic participation in the workplace as a means to protect workers’ rights in China.  The last time I participated in such a conference was as an observer of a similar one held by the then Chinese Workers’ Movement College2 in 1999.  At that conference, there was little concern about the crisis of Chinese workers and much praise for the impact that market-based “reforms” — with the right amount of union and employer cooperation — would have on workers’ social and economic mobility.  It was the first union-sponsored conference on labor where I witnessed a union cadre discuss how the theories of Alan Greenspan could be applied in a positive way to help workers!

At the recent conference, in contrast, Chinese and international intellectuals demonstrated a far greater awareness of the harmful impact that neo-liberalism has had on the status of workers in China and the collective forms of resistance it has spawned — particularly in the state owned sector.  Papers that they presented challenged the propagandistic claims that restructuring has enabled new factory-level institutions such as the Workers Representatives Congresses (WRC) to “democratically participate” in enterprise management. On-the-ground case studies of “democratically managed” factories transitioning from state to private stockholding revealed that the WRCs frequently are controlled by factory directors and upper-level managers.  Where workers have the opportunity to “participate” in production decisions through stock ownership, they are invariably unable to counter the power of the largest owners of stock on the boards of trustees.  Beyond critical reports on the actual nature of class power in China’s state enterprises during transition, participants also reported on worker-led protests against losses they experienced as a result of Party-“capitalist” coordinated sell-offs of state assets.  Discussions on workers’ participation in production in China now — perhaps for the first time in 20 years — have come to include the idea of mobilization of self-organized collective protests.

This new interest in China’s workers is not accidental. It reflects the changes in China’s political economy in the last five years.  Entry into the World Trade Organization five years ago only bolstered the confidence of China’s investor class in its capacity to overtake the state as the leading social force in Chinese society, which shows itself in ways that reveal much about the nature of Chinese economic restructuring.  It’s not only that millions of China’s state workers have experienced unemployment and the crises that it brings.  There has been a noticeable increase in wealth created and experienced in China — especially among its “middle classes.” Not only are “foreign” goods (made in China naturally) now much more available, but they are much cheaper thanks to price wars among international sellers including Wal-Mart and Carrefour. Politically and economically, now Beijingers live in a city that is increasingly taking on an identity as a — if not the — world center.

Not far beneath the surface are tensions that only look to deepen. Class divides manifest most noticeably in the divide between urban residents and migrant workers who come in from distant provinces to do almost every type of work available in construction and service sectors.  Walk into any restaurant or grocery/department store or construction site, and almost all of the workers are from outside Beijing.  Their numbers grow with rapidity, and the growth is now tolerated. They have access to wage labor but are typically denied the things that matter for economic advancement in Chinese cities, such as public schools, health care, and other more expensive social goods. In the past, they were despised by urban residents for disrupting the order of state-socialism; now, they are treated as inevitable and necessary — but little more than cheap help to serve a more and more affluent urban middle class.  One Chinese scholar remarked to me that migrant workers are regarded as a class of “non-existents,” just as Iraqis are by Americans these days.  However, this class of workers is not like previous migrant workers who were satisfied with sending money home and returning one day to the country.  Migrant workers in China’s cities are becoming a class that hopes to enjoy the cosmopolitan offerings of urban life no less than registered city “residents.”  The only question seems to be how long its status as help and nothing more will be tolerated before becoming a condition for social explosions across China.

Before leaving, I had a chance to participate in a discussion between leftist students from Beijing and several leftist professors from abroad in late August.  We shared perspectives on the potential for student solidarity with working-class organizing in China in a move to push student activism beyond nationalistic campaigns that are endorsed by the Party. Leftist students in China often express understandable if sometimes exaggerated concerns about risks involved in such solidarity work.  Thus they expressed little interest in, say, showing open or active support (in the short-term at least) for global solidarity campaigns — for example for Hong Kong students currently involved in anti-sweatshop campaigns against Disney Corporation. However, when it was suggested that, on campuses like Peking or Qinghua University, students could show support for migrant workers who worked in restaurants near or on campus by doing reports on their work conditions (no small part of which is abuse from university students!), there existed broad agreement that this kind of work could and should be pursued by Chinese students interested in a Marxism that does more than reproduce ideologies of global neo-liberalism.  While neo-liberalism not long ago enjoyed an unquestioned hegemony in Chinese society, such discussions are a sign that its hegemony is no longer as secure as it once appeared. And at no better time since liberals in China have only more “free” markets to offer as the solution to the contradictions that ripen with each passing day in China.

2 Its name has changed since to the less militant-sounding “China Labor College/” Its primary function is to train cadres for positions in the Party-controlled union ACFTU.

Stephen Philion is an instructor of “Race and Cultural Minorities” at
Hamline University and researches the impact of privatization on Chinese workers. Philion received his doctorate in April 2004. The first chapter of his dissertation “The Discourse of Workers Democracy as a Terrain of Ideological Struggle in the Moment of Transition from State Socialism in China” is available at <stephenphilion.efoliomn2.com/index.asp>.