Teachers in British Columbia are standing on the rainy picket lines this morning for Day 8 of an unprecedented illegal strike against the Liberal provincial government.  This strike has surprised nearly everyone in its strength and resolve and is shaking the political culture of BC to its core.

The strike began on Friday, October 7 after months of fruitless bargaining with a provincial bargaining authority that had no power to actually bargain anything.  The government had mandated a complete salary freeze over three years and, most critically, the employers refused to bargain crucial issues of working and learning conditions such as class size, class composition, special education resources, libraries, and counseling support, which the government had stripped out of the contract in 2001. When teachers began very limited work-to-rule actions within the terms of “Essential Services” legislation the government had imposed on teachers over the objections of the International Labour Organization of the United Nations, the government intervened to smash the dispute, unilaterally extending the current agreement, with no wage increases or improvements in learning conditions. 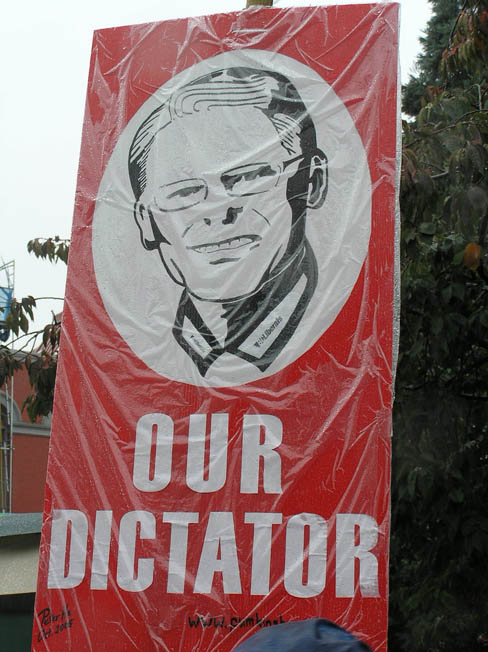 Predictably, the government and employers tried to use the courts to force the teachers back to work. Courts declared the strike illegal.  Last week a judge ruled that the teachers’ strike fund was frozen and they could no longer pay the $50-a-day strike pay which teachers had been scheduled to receive.  This only served to anger teachers even more and picket lines remained solid throughout the province.  What is more, teachers have been receiving strong support from students, parents, the labour movement, and the populace as whole.

Bill Hood, a Vancouver teacher and picket captain, spoke to me about what led teachers to take strike action and what is holding them together. “This has been building for a long time,” says Hood.  “Teachers feel a complete loss of control over the crucial issues in their schools. First they took away our right to bargain learning and working conditions; then they tried to take over our professional association (The BC College of Teachers), now they’ve imposed another contract and are trying to destroy our union. As the attacks against us have intensified, our unity and determination has increased. The government has managed to make nearly every teacher in the province feel personally and professionally insulted and taken for granted.  That’s why every teacher who’s interviewed in the media, most of whom have no union experience, is able to be so articulate about our demands and the situation they and their students are facing.” 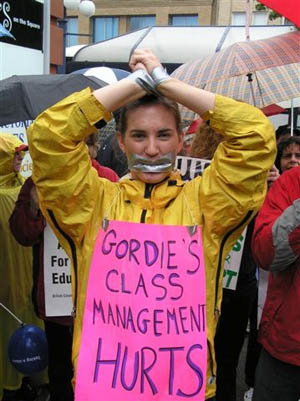 Hood says teacher frustration on the job has been mounting steadily; libraries closed because teacher-librarians are assigned to other duties, numbers of students with English as A Second Language are increased while ESL services are cut sharply, and larger and larger class sizes — some as high as 37 students — are imposed, and services for students with special needs are slahsed.  “Teachers continue to cope with these issues everyday, but the stress and frustration of not being provided the resources to teach students properly takes a health toll.  There has been a huge increase in the number of teachers on long-term disability leave with serious illnesses.”

Last Monday, the BC Federation of Labour, representing almost all the unions in the province, sponsored a demonstration on the steps of the provincial legislature in Victoria.  This was accompanied by a protest strike in which public- and private-sector workers in the Victoria region walked off their jobs and joined the protest.  The crowd of some 25,000 sang and cheered as they heard strong support for the teacher strike from a number of labour leaders and representatives of teacher unions across the country.  Barry O’Neil of the Canadian Union of Public Employees (CUPE) spoke with conviction for the 25,000-school support workers in his union who have been making the sacrifice to honour teacher picket lines throughout the dispute. 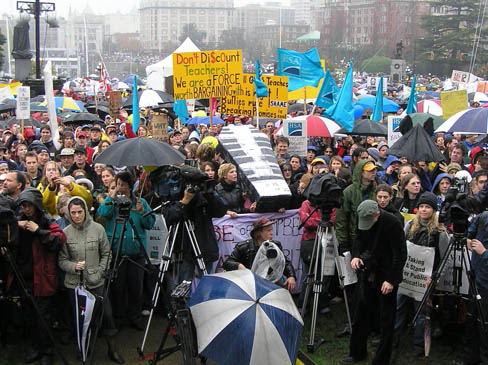 The strongest cheers went to Jinny Sims, BCTF President, who has been an outstanding spokesperson for teachers.  With her calm manner, insistence that teachers are fighting for better learning conditions for students as well as themselves, and principled defense of the civil disobedience that teachers have been forced into by the government, she has been one key factor in the wave of public support teachers have received. 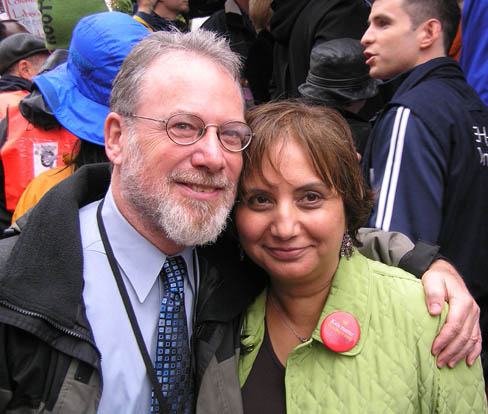 The day after the rally and shutdown, the Vancouver Sun daily newspaper (no friend of teachers and the BCTF) reported a poll that indicated that 57% of the populace supported the teachers in the dispute — something which no one would have predicted after nearly two weeks of an illegal province-wide school shutdown that clearly has been a major inconvenience for parents.

“People who we don’t even know come up to us on the picket lines every day and offer their support,” says Hood. “Some want to give us money. Parents and students bring food treats. We constantly are hearing honks of support from passing cars.  We had a barbecue at my school last week, the day after the judge froze our strike fund.  There were a large group of current and former students out to support us as well as many parents and teachers from around the neighbourhood. We sang and ate hot dogs and when Jinny showed up on the line to speak to the camera crews, everybody went nuts.  The union representing community college teachers has donated a huge number of food vouchers to be used by our members. People on the picket line understand that their union is not going to let them hang out to dry without everyone lending a hand to support each other.  Many school staffs make their own arrangements to help support teachers who are in perilous financial straits and the local union provides emergency funds.”

The community as a whole has recognized the reality of the decline in the public schools caused by years of government underfunding and attacks on teachers’ bargaining rights.  Despite government and media attacks on teachers and the BCTF in the months preceding the strike, the public clearly has a great deal of respect for the work teachers do with kids and sympathy for the situation they find themselves in. As of today, 40 of the provinces’ local school boards (the direct employers of teachers) have urged the government to repeal Bill 12 and/or to sit down with teachers to negotiate an end to the impasse. Polls reveal that a large segment of the public also feel that teachers deserve a salary increase. With a surplus of nearly 2 billion dollars in the provincial budget, the government is unable to claim that it can’t afford to meet teacher demands, as it has in the past.

Badly misjudging the public mood, the Liberal government has taken a hard line throughout the strike.  Labour Minister Mike De Jong has painted himself into a corner by repeatedly stating the government would not negotiate with teachers as long as they were on an illegal strike.  In contrast, Sims has insisted on the government sitting down at a table with teachers to resolve the dispute and offered to begin negotiations at any time “with no preconditions.”

Yesterday, there seemed to be a breakthrough.  The government appeared to blink in the face of the public pressure.  They appointed respected mediator Vince Ready to sit down with the BCTF and representatives of the government to try and reach an accord.  Although De Jong claimed that he hadn’t backed down and the government was still refusing to negotiate with teachers, the media were jumping all over him, accusing him of retreating.  This has led to the government being very inflexible with the mediator to date in an attempt to “save face” and continue to appear unwilling to bargain with teachers.

Meanwhile, the labour movement is keeping up the pressure, to some extent.  CUPE and other public-sector unions were off the job in the north of the province yesterday. CUPE, the largest union in Canada, represents workers who work for a wide variety of local government services and when they’re all off the job, many services grind to a halt. Today, there was a limited general strike in the Kootenay region of the province, where local unions in both the public- and private-sector took part.  Tomorrow, CUPE will go on strike in the rest of the interior, and on Friday, CUPE will be out to shut down Vancouver and the populous Lower Mainland region, hopefully with the support of other public- and private-sector unions.  CUPE has a big stake in this dispute with 25,000 of their members not working and supporting teacher picket lines.  There is a major question emerging as to whether the rest of the BC Fed. Leadership is serious about strike action to support the teachers.  Clearly, CUPE is taking the lead and trying to get the other Fed unions to follow suit and meeting some resistance in doing so.

From the beginning of the strike, the role of the BC Fed. Leadership has been a question mark. They helped engineer an end to a similar illegal strike of hospital workers in 2004 with a weak settlement that the workers never had a chance to vote on before being ordered to return to work. This led to serious bitterness and division with the Hospital Employees Union and sharp criticisms of Jim Sinclair, BC Fed President, and other top labour leaders for the way the dispute was handled.  That situation can’t be repeated here in the same way, in that a recently adopted BCTF policy prohibits the leadership from ending a strike without a vote by the membership. This strengthens the hand of Jinny Sims in dealing with both the government and the rest of the labour leadership. She will insist that the BCTF Executive will need to get a deal that tangibly improves learning and working conditions for teachers and students as a bottom line to win approval from teachers.

Bill Hood was insistent that the rest of the labour movement had to “walk the walk, not just talk the talk.” “If you don’t want to really help, then just stay home,” says Hood. “The credibility of the BCTF is at stake in this dispute. If we can’t do something about the way government is treating teachers and students, then what’s the point of our collecting dues money from teachers?  But the credibility of the BC Federation of Labour is on the line just as much as our union’ credibility.  If they can’t bring in the whole labour movement to support the kind of courage that teachers have shown and public credibility that they have won, then how can workers have confidence in them to defend basic bargaining rights?” The next few days should determine the outcome of this strike and the role the broader labour movement will play. 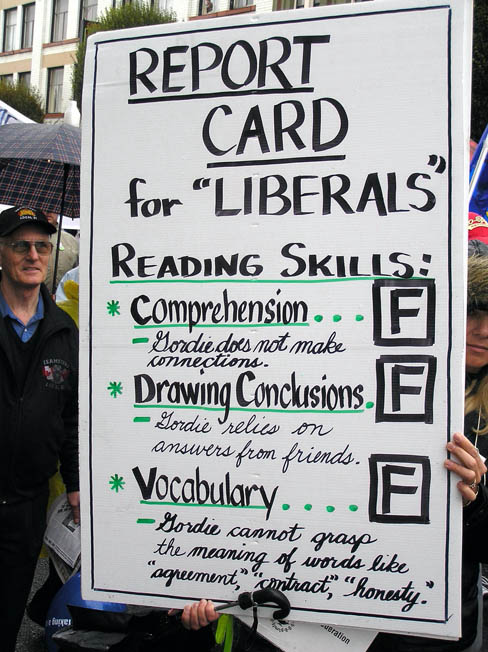 In the past twenty years, public-sector workers throughout North America have been faced with cutbacks, privatizations, and loss of rights.  Normally, their unions have beaten a retreat and tried to save what they could of their members’ rights and working conditions.  This has been the general case here in BC since the Liberals began their union-bashing as part of their hard-right policy plans.  Hopefully, the example of BC teachers will be one that can inspire more courageous fightbacks here in BC and elsewhere in the country and beyond. 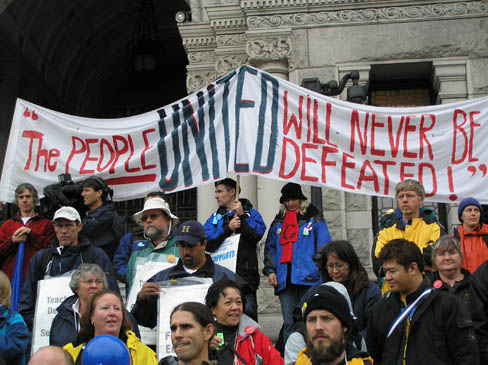 Bob Rosen is a recently retired teacher and activist in the British Columbia Teachers’ Federation.