Evelyn Wiener died October 8, 2005, at 91, surrounded by her friends and comrades.  Her earliest memory was her parents’ two-week celebration of the Russian Revolution in 1917.  Hiding her age to join the Young Communist League at 14, she was the Manhattan District Organizer for the American Communist Party in the 1940s.

A childhood polio survivor, the blue-eyed, round-faced, white-haired woman navigating the city’s streets at top speed in her electric wheelchair was a familiar sight to anyone involved in fighting for justice on the Lower East Side.  Campaigning for Rosie Mendez or Margarita Lopez, leafleting against the war in Iraq, or demanding an end to police brutality, Evelyn Wiener was always there. 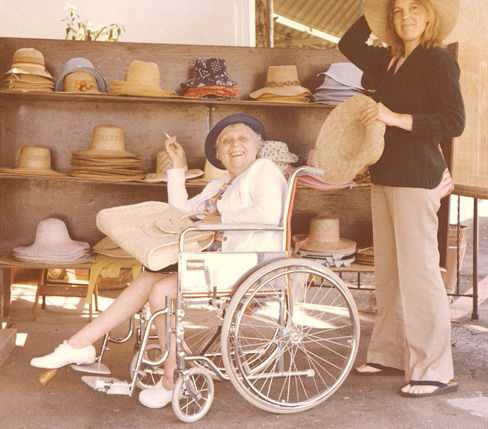 In a 2002 interview, Evelyn Wiener recalled standing on a subway platform in Seagate, Brooklyn, in 1932 on her way to a summer school course in geometry when she spotted a contemporary sporting a long flowing coat. A garment, Evelyn thought, that only a radical would wear.

The woman was Annie Steckler, a year older than Evelyn, also in summer school. Evelyn set out to organize her, but when Evelyn said to her in a portentous voice, “We are becoming a menace,” Annie replied incredulously: “What, a little two-by-nothing like you is going to change the world?” Their circle came to include Hunter College girls like Annie and BD Magdoff; City and Columbia College boys like Harry Magdoff, Joe Starobin, and Arthur Stein.

In those Depression years, the communists were indeed becoming a menace. And Evie Wiener was red to the marrow. Her parents were charter members of the Communist Party in America. She had gone from being a Young Pioneer as an adolescent, to the Young Communist League as a teenager, and had finally become full-blown CPUSA.

“The thirties were wonderful years of struggle,” Ms. Wiener reminisced. “I suppose we were a menace to the capitalist class,” Weiner recalled. “There was mass unemployment . . . but the spirit was very high because it was a spirit of struggle and I remember those years as the best years of my life because we were always fighting.”

Everything was a protest. Radicals wore leather jackets and carried themselves like Bohemians. The women wore no make-up. She refused to wear a hat, winter or summer. One day a friend of her mother’s said to her, “It’s so cold and you’re going out without a hat?” Evelyn turned to her contemptuously and said, “Your generation will never understand.”

With the men away during World War II, women took positions of power in the Party. Ms. Wiener became a regional organizer for the 500 members from on the Lower East Side Street. When the men came back from fighting, they said, “We hear you did a good job. Now that we’re back you can relax and resign.”

What did Evie do? “I said, ‘I’m not resigning, I’m not sick. I’m staying.’ I had a real battle. East Side tough guys found it very tough to take leadership from a woman. Then they said I lived on 15th St., and they tried to get rid of me by saying I’m not a true Lower East Sider because I lived north of 14th Street.  But I weathered it.” She eventually rose to be Manhattan County Organizer. She fought in campaigns to integrate Manhattan’s public schools and helped bring the first African-American families to Stuyvesant Town.

A Party insider, she was ultimately a victim of internal splits and government infiltration.  Following the Hitler-Stalin pact — which she always defended as necessary for the survival of the Soviet Union — the Party’s effectiveness dimmed. “I left the Party.  It was a factional struggle: there was in the Party a left, right, and center.  I was in the left, and the center won. We were all kicked out. It was 1956.” After she rejoined, in the early 60s, a friend approached her and said she had strayed from the Party’s line in her support for China; she could either resign or be expelled. “I said, I’d rather resign,” she recalled.

The personal betrayals never healed. One beloved comrade had a wonderful sense of humor. Party members learned he was an agent but tried to be so nice to him that he wouldn’t inform — it didn’t work.  One embarrassing incident concerned the Party stenographer, a betrayal Wiener only learned of years later. When her close friend Paul Robeson, Jr. obtained his FBI files, he told her that every one of her speeches to the organizing committee had been recorded verbatim by the Feds. Only then did she remember the stenographer who always came up to her after a speech, complimented her on her oratory, and made her repeat it.

Evie rallied for Sandino in the 1920s and to free the Puerto Rican Nationalists as early as the 1950s. She often recalled the great organizing campaigns to free the Scottsboro boys and to save the Rosenbergs.  But she carried her radicalism over to new generations, with a rare open-mindedness.  Leading a Marxist study group in the 1970s and 1980s, she was organized into feminism by her students.  Rooted in the Lower East Side, her last years were spent organizing Coalition for a District Alternative (CODA), the Lower East Side’s progressive community group, getting arrested in protest against the police killing of Amadou Diallo, maneuvering her wheelchair around police barricades in demonstrations against the Iraq War.

An unfailing optimist about the potential for revolutionary social change, Evie inspired all who knew or worked with her.

Eleanor Stein teaches telecommunications law at Albany Law School, and women and the law at the State University of New York.