One law for the rulers and another for the ruled. So decided English Chief Justice Bingham in his 1998 ruling granting the mass murderer (and former dictator of Chile) Augusto Pinochet immunity. His exact words were: “The applicant is entitled as a former head of state to immunity from civil and criminal proceedings of the English court.” I don’t know about you, but my reading of this decision is that Adolf Hitler, Pol Pot, and a few other murderous former heads of state would walk out of this man’s court room, as well. Once again, the law written by the rich and powerful for those of us not so favored has protected its own.

Since the 1998 British decision, Pinochet has received immunity from prosecution at tleast three more times. Juan Guzman, the recently retired Chilean investigative judge who was responsible for two of the later indictments that were thrown out supposedly because of Pinochet’s ill health, had this to say about Pinochet’s refusal to stand trial. “A person who wants to prove to the world that he is innocent should go through a fair trial. Pinochet doesn’t have the courage to do that.” Guzman was originally a supporter of the coup that put Pinochet in power and has since brought charges of human rights abuses and corription against the former dictator.

Let’s get it straight. Augusto Pinochet ordered the deaths of perhaps 4000 people, if not more. He did this after violently overthrowing a legally elected government in the sovereign nation of Chile. Of course, he had a little help in this endeavor from Richard Nixon, Henry Kissinger, Anaconda Copper, IT&T, and that always friendly-to-dictators bureaucracy — the Central Intelligence Agency. That’s another story, however, and one that would also be dealt with if there were true justice on this planet. But, if Pinochet can get out of his murder charges, believe me, so will the CIA and Henry Kissinger.

One of the most moving times I ever heard Joan Baez sing was in Washington, D.C. at a funeral procession for Orlando Letelier and Ronnie Moffitt. These two individuals were killed by Pinochet’s secret police — the DINA — by a car bomb in the middle of the U.S. capital city. 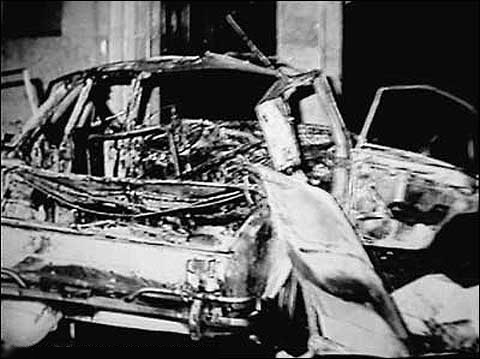 As Joan sang “Swing Low, Sweet Chariot,” fascist demonstrators threw dirt and insults at those of us who had gathered to commemorate these two individuals and condemn the governments responsible for the murder. Business as usual. The men directly responsible for the car bomb were eventually arrested, tried and jailed, (after years of intense pressure from several governments and individuals), but their leaders weren’t. Leaders who, like Captain Medina, General Westmoreland, and President Johnson in the My Lai Massacre case, got off scot free. It’s called plausible deniability in the cases of My Lai and Iran-Contra. In Pinochet’s case, it’s just the old story of the powerful protecting the powerful. After all, thinks the British judge (or the president or the prime minister?), that could be me. Pinochet was not an aberration in the way he ruled, just excessive. Indeed, as I write, the U.S. security establishment is considering removing the “ban” on assassinations so that it can kill its current terrorist menace — Osama bin Laden — and whomever they decide is the next one. As for that court in England — how long have they been imprisoning IRA members without trial or charges?

If one is surprised that Pinochet may get off, then he has been fooling himself about the nature of justice in the courts of the powerful. One should be more surprised if Pinochet were ever tried and found guilty.