In 1984, the Margaret Thatcher regime and the British National Coal Board annulled an agreement reached after the 1974 British miners’ strike.  The Board told the British public that they intended to close 20 coal mines and privatize the previously nationalized industry.  At least twenty thousand jobs would be lost, and many communities in the north of England and in Wales would lose their primary source of employment.  Thatcher had prepared against a repeat of the successful 1974 industrial action by stockpiling coal.

David Peace, a British crime novelist, was a teen at the time who lived in the region of Britain most affected by the strike.  He became known to the British and US crime fiction reading public with his series of four books about the Yorkshire Ripper — a British serial murderer.  These four books, known as the Red Riding Quartet, are as much about police corruption and criminality as they are about the serial murders.  Cops on the take.  Cops running prostitution rings and pornography outfits.  A police chief who tells his select group of officers that, since there will always be vice, then the cops should be the ones who control it.  Murders of prostitutes and criminal opposition and the destruction of witnesses’ lives.  False arrests and frame-ups.  There are no redeeming characters who survive in Peace’s Quartet — only the most corrupt and evil.  The Iron Lady’s ruthless disregard for human life that did not serve her intended resurrection of capitalism and empire in colors that bled toward the fascist National Front is the underpinning of Peace’s work.  It is a bleak look at human life in the twilight of British industrial capitalism and a despairing prediction of a future many of us now inhabit.

If there was one political event that defined the Thatcher era, besides the trouble in northern Ireland (including the H Block prison situation, many spectacular bombings by the IRA and provocateurs posing as the IRA, and the growth of the Protestant paramilitaries), it was the aforementioned miner’s strike.  Of course, Peace wrote a novel about the strike.  It is a novel that reads best with Elvis Costello’s first two albums, Billy Bragg’s War and Peace EP, and maybe something by The Smiths playing in the background. 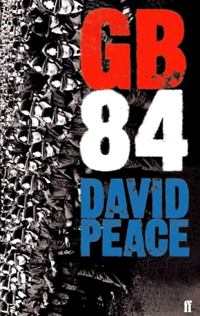 That book, titled GB84, is nothing short of stunning.  Told in two parallel narratives, its portrayal of corruption, political machinations, and corporate and government heartlessness makes the desperate situation of the miners and their union superreal.  One strain of the narrative is told by a striking union miner who details the lives of men on strike who lose their homes, their wives, their children, jobs, and dignity.  The other strain is the story of the union leadership, its government counterpart, and various police and corporate operatives who operate at different levels of secrecy.  Some are M15 and some are private contractors with ties to the National Front.  Some are double agents whose final allegiance lies with the government of the ultra-right Maggie Thatcher.  Like the Quartet, there are ambiguities in the story, but only as much ambiguities as there are in real life.  Interpretation, after all, is a part of the whole.

GB84 is about the savagery of capitalism.  Jackboots and legalized police beatings of unarmed strikers.  Secret hit squads and government/corporate-sponsored organizations of police pretending to be miners whose job is to convince the strikers to scab.  Democratic forms and fascist realities.  The war of the super rich against the workers.  This is David Peace at his best.  There is no beauty here.  Some of the union officials demand sacrifices of their members while they secretly hole away funds for a future after the union’s demise.  It is these leaders’ distance from the travails of the members and their proximity to the slime intent on profit at the workers’ expense that corrupts them.  Indeed, it is as if they cannot help themselves, as they fall into the abyss of selfish concern for their own future while the union crumbles under the onslaught of big-time capitalists and their governmental conspirators whose ruthlessness knows no bounds.

The miner’s strike was a symbol of resistance during the reactionary 1980s.  It was simultaneously an example to corporate capitalists the world over of how the battle must be fought if they wanted to stay on top.  No more negotiations with workers and no respect for their lives.  Resistance to the will of capitalism should not be legitimized by negotiation but destroyed through violence.  The defeat of the strike and the privatization of the national economy in Britain was a harbinger of the neoliberal future we now live in.  It is a future that for many is as bleak and despairing as Peace’s master work.  It is also a future that more of us may soon be sharing.  When the shock of economic collapse heightens, there will be nothing left to protect us.  Like the miners worn down by the systemic strangulation of their union in the mid-1980s, the only response will appear to be one that increases our isolation from each other, leaving us to fight among ourselves, like so many fish fighting over a fisherman’s chum, a fight whose final victory is one that only leads us to certain death at the hands of the fisherman.  The only possible redemption might be in a rebirth of solidarity amongst those currently fighting over that chum.

Ron Jacobs is author of The Way the Wind Blew: A History of the Weather Underground (republished by Verso). His first novel, Short Order Frame Up, is published by Mainstay Press. He can be reached at <rjacobs3625@charter.net>.