[Lisa N. contributed all photographs below that illustrate Remi Kanazi’s essay. Lisa came back to the United States from her nine-month sojourn in Palestine two months ago. Over the last several years, she spent twenty-seven months in Palestine, working with Palestinians and Israelis struggling to end the Israeli occupation. She took some of the photographs at the Ibdaa Cultural Center in the Dheisheh refugee camp in December 2004 and shot the others during the Ibdaa dance troupe’s performance as part of a week of activities held in Dheisheh to commemorate the Nakba in May 2005. Her observations on Palestine as well as more of her photographs are found at her blog: The Soul Unfolds Itself. — Ed.]

The Ibdaa dance troupe‘s tour of the United States has begun. The troupe is made up of ten boys and ten girls from the Dheisheh refugee camp in the West Bank, who perform Palestinian folkloric (debke) dance and theatre. The young performers are the third generation of dancers that Ibdaa has produced. The first stop of the tour, which raises money for Dheisheh refugees, was the University of Massachusetts-Amherst campus, where the audience of nearly two hundred Palestinians, other Arabs, community activists, and curious students eagerly awaited the new generation’s first performance in America. 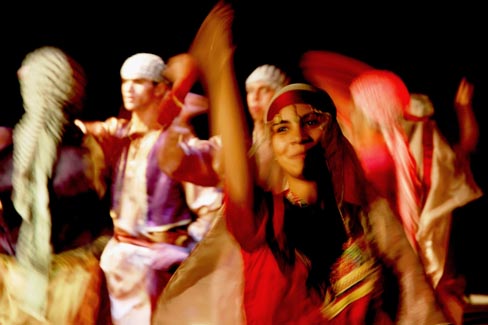 During the show, a boy in red garb stood at the head of the stage with his arms raised, proudly waving a Palestinian flag. Behind him stood boys dressed in green and gold, next to girls in purple and gold. The children, serious-faced, stared into the audience . . . and then flashed the sign of peace. 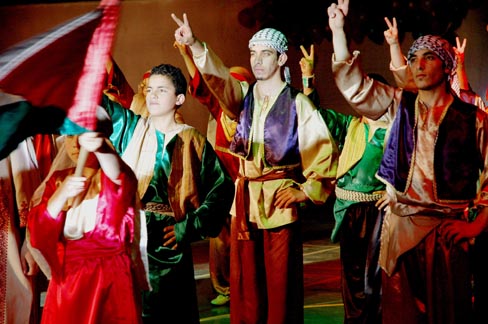 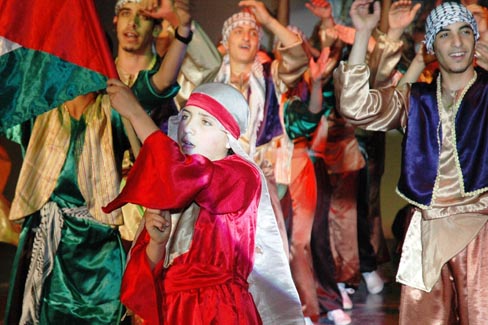 The troupe’s performance “depicts the history and aspirations of Palestinian refugees.” Participation in the Ibdaa dance troupe provides the children with much-needed exposure to the wider world and an opportunity to express their courage and humanity through dance and theatre. These young performers not only dance, but involve themselves in production, choreography, sound design, and public speaking.

Founded in 1995, the Ibdaa Cultural Center in Dheisheh has developed many programs — including dance — that help children and women cope with the hardships of refugee life. Nearly 1,200 children and women are members of the center, which serves as an inspiration to not only the Dheisheh camp but Palestinians everywhere. The group organized the first girls’ basketball team in the fifty-nine camps of Palestinian refugees spread across historic Palestine, Lebanon, and Jordan. The women’s committee of Ibdaa created a program that produces and sells Palestinian embroidery (tatriz) in the Occupied Territories and overseas. The center has a kindergarten, a library with more than 1,000 books, and workshops and training programs in “health, human rights, leadership development, women’s empowerment, and technology skills” that equip Palestinians with the tools for survival and the values of integrity and justice. Allowing people from around the world to experience Dheisheh, the center also built a Guesthouse, which accommodates up to forty-five guests and whose restaurant serves reasonably priced meals. 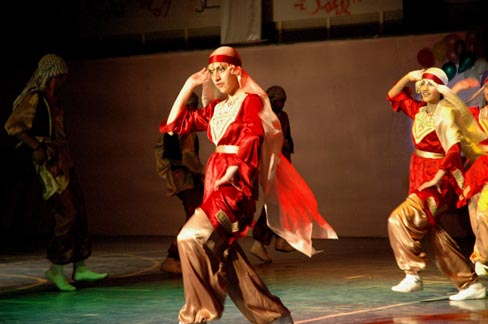 Ibdaa means “to create something out of nothing,” which is exactly the Palestinians’ response to thirty-eight years of occupation. In 1948, when thousands of indigenous Palestinians fled to Dheisheh from forty-eight villages west of Jerusalem and Hebron, they indeed had nothing. Living in tents, while enduring the aftermath of Al-Nakba (The Catastrophe), refugees built the camp from the ground up, persevering through displacement and dispossession. 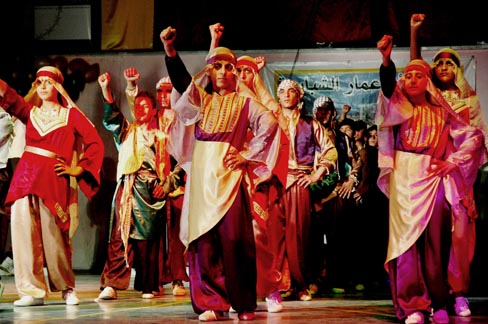 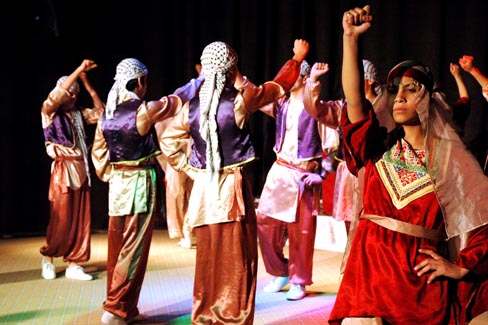 The children of the camp continue to move forward despite their chaotic and tumultuous environment. One of the organizers of the troupe said on stage, “I learned how to throw rocks before I could read or write.” These twenty children, who refuse to be be held down by the pressures of occupation, are now making ripples in America, their performance more powerful than any weapon at Israel’s disposal. They are making a positive difference for themselves and their community while changing American minds about the Palestinian people — who we are, where we come from, where we want to go — one at a time. 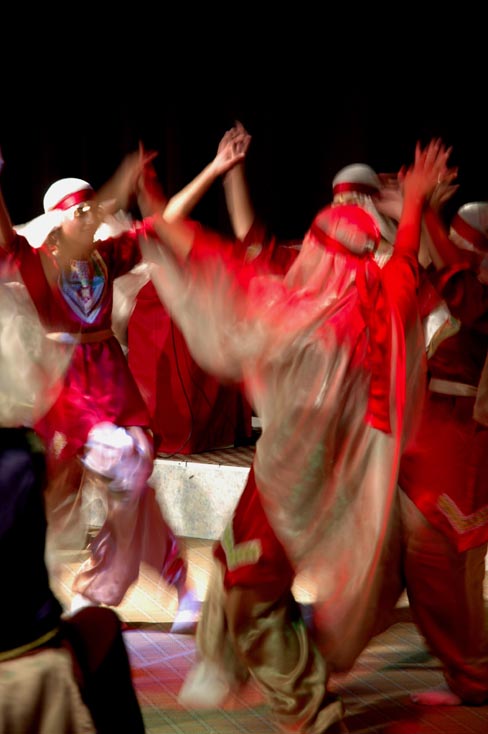 At the reception after the show, the Ibdaa dancers mingled with their new American fans. These twenty children were comfortable and at home. Exile has not crushed their spirits, nor has it taken away their ability to enjoy themselves and their new adventures . . . just like any other children. One wouldn’t believe that they were brought up in a refugee camp — their laughters could have been born in an American suburb such as Amherst. Giving a human perspective on a dehumanized conflict is crucial — it changes the relationship between Palestinians and Americans, sowing the seeds of freindship and solidarity. 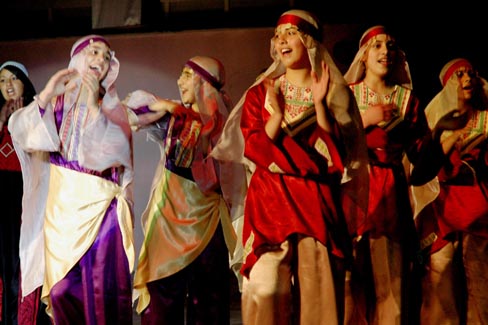 The Ibdaa dance troop will be touring the US, visiting twenty cities over the next month. Remember that all proceeds go to the Dheisheh refugee camp. Support the Ibdaa dance troupe, support Palestine — come out and be a part of the experience that the children of Dheisheh want to share with you.

For the tour schedule, visit the website of the Middle East Children’s Alliance (MECA), the tour’s main sponsor; to order a ticket online, go to <https://www.brownpapertickets.com/producer/1993>; and for more information about Ibdaa and the Dheisheh camp, explore Ibdaa’s website: <www.dheisheh-ibdaa.net/home.htm>.

Remi Kanazi is the primary writer for the political website www.PoeticInjustice.net. He lives in New York City as a Palestinian American freelance writer and can reached via email at <remroum@gmail.com>.