On November 2, 2005, thousands of students from across the country walked out of class and onto the streets to protest Bush’s war in Iraq and military recruitment in their schools.

In August, the call went out from Youth Against War and Racism chapters across the country to mobilize for student walkouts and protests on November 2. We wanted to mark the anniversary of Bush’s reelection with protests demanding an immediate end to the war in Iraq, an end to military recruitment in our schools, and money for education and jobs, not war.

Last summer, YAWR existed in just a few schools in four citie — Seattle, Tacoma, Boston, and the Twin Cities. But students and anti-war groups in at least a dozen cities and six states answered YAWR’s call to action on November 2.

Reports from across the country indicate extremely lively and inspired protests of mainly high school students, many of whom were participating in their first demonstration. More than ordinary anti-war protests, the student walkouts seem to have made an especially strong political impact, bringing new youth into action and shaking up local schools and communities. The excellent media coverage in many areas gives an indication of the impact YAWR has made.

Below are summarized accounts taken from the reports several areas have sent in about their actions.

At 10:30 AM on November 2, students from over 40 area high schools, middle schools, and colleges walked out of class. By 12:30 AM, upwards of 2,000 youth had gathered at the University of Minnesota for a radical and exuberant rally, exceeding the expectations of the organizers (Socialist Alternative, Anti-War Organizing League, and Youth Against War and Racism).

High school speakers led off the demonstration, recounting the growing crisis in public education and the need to redirect war money to education, and demanding an end to military recruitment in their schools. Other speakers included a representative from the U of M clerical workers, the Coalition for Equal Access to Education, Socialist Alternative, AWOL, and others.

A bouncy march followed, winding through campus, taking over streets, and culminating in a combative rally in front of a military recruitment station, blocking the nearby major intersection for 30 minutes of spirited chants. Despite the lack of a permit for taking the streets, the police stood aside the entire march. 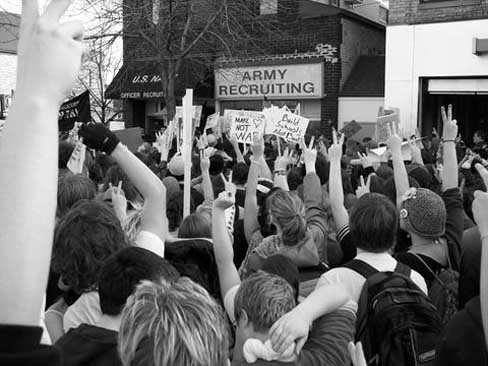 The walkout was the top story on all TV and radio news that evening and at the top of the local sections of newspapers the next day (e.g., James Walsh, “Student Protesters Attack Iraq War,” Star Tribune, 2 November 2005). Click on the link to see Profe Martinez’s photos of the walkout.

On the anniversary of Bush’s “re-election,” over 1,000 students walked out from about 50 Seattle-area schools and took to the streets to protest the Iraq war and military recruiters in our schools. After walking out of school, wave after wave of students and young people poured into Westlake center from across the Puget Sound.

Carrie Hathorn kicked off the rally with an enthusiastic round of school shout-outs — a call and response between Carrie shouting out schools and each school roaring back. Next, the Blue Scholars took the stage and rocked the mic with political hip hop grooves. High school speakers, spoken word, and endorsing organization representatives spoke.

Our youthful energy was unstoppable as we marched from Westlake to the Capitol Hill Arts Center (CHAC). We filled nearly three street blocks waving signs and chanting against military recruiters in our schools and against Bush’ war. Once we reached the CHAC, some students spontaneously sat down in the street. Fortunately, no arrests were made during the march or at our final destination.

Our walkout got a ton of media coverage that will inspire others to get involved in the antiwar movement and join Youth Against War and Racism. We made the front page of the Seattle Post-Intelligencer and the Seattle Times local section. Check out some pictures here.

Students from over a dozen high schools and colleges in the Boston area walked out and joined a citywide protest against the war and military recruitment on Boston Common. Over 250 students gathered on the Common to hear youth speakers, many speaking before a crowd for their first time. The response to the call for walkouts was tremendous. Over 200 students alone walked out at Quincy High School, and 75 at the Academy of the Pacific Rim. Students came from the suburbs as well, and from as far away as New Hampshire.

The event was really inspiring. The crowd was almost entirely young people. For many students, it was their first or second protest ever. Much of the crowd was high school students, who had heard about the walkout through our leafletting or banner tour, at October 29th, or even some who had seen our stickers in the T and went to the YAWR website. The rally was a really good time, with spoken word by Optimus from the Foundation and Exposition from Audible Mainframe (which was great!).

It was really awesome because many people felt free to come up and speak their mind and did an excellent job. There was also a really energetic march from the Common to the military recruiting station across the street, to the State House, and back to the bandstand on the Common.

The most urgent task now is to organize a solidarity campaign with all those students who face disciplinary action. There are many students who are facing suspension.

With Fort Lewis position next door, Tacoma is a military town without a strong anti-war tradition in recent years. On November 2, the first student-organized anti-war protest since the Vietnam era brought 100 people into the streets to protest the Tacoma Mall military recruitment station.

A right-wing talk radio station called for a counter-demonstration and managed to mobilize 30 pro-war groupies who came to squelch the demonstration . . . and did little more than wave flags and come up with a clever chant — USA, USA, USA, USA.

The students were undaunted and replied with a chant of their own: Support the Troops, Bring Them Home NOW!!!

Although this was the first protest for Youth Against War and Racism (YAWR) in Tacoma, a feisty contingent of youth grew in confidence as the demo went on. More chants came forth and were enthusiastically taken up by the protesters.

After 45 minutes, it was time to march. A contingent of students left the pro-war Ra-Ra squad standing in the rain. Passing drivers frequently honked in support and gave the thumbs-up sign. This response accurately reflected an American public that is mostly against the war. But it took the youth of Tacoma to break the silence of conformity and vigorously make this anti-war sentiment publicly visible.

The students — now “accompanied” by police — marched back to the Mall, and a new chant went out as we moved through the strip malls: While You’re Shopping, Bombs Are Dropping! Heads turned to hear what Tacoma’s youth of today had to say. After that challenge to America’s complacency, the youth returned to the central focus — 1, 2, 3, 4, We Don’t Want Your Racist War!

The demo didn’t end with a defeated whimper, as do many of a tired peace movement, but with a roar. Tacoma’s youth has found its voice.

Ty Moore is an organizer for Socialist Alternative based in Minneapolis. Alongside area high school students, Moore helped begin Youth Against War and Racism which initiated the November 2 walkout call across the country. He can be reached at tytymo@gmail.com>.