Sedona is a small town about twenty-five miles south of Flagstaff in north central Arizona. USA Weekend recently voted it the “most beautiful place in America.” Sedona’s setting is stunning. To get there from Flagstaff, you drive down Oak Creek Canyon on a steep and heavily switch-backed road. As the canyon deepens, you are surrounded by rugged rock-cliffed walls, and as you get closer to the town, the canyon opens to vistas of red-rock sandstone buttes, mesas, monoliths, and pinnacles. Fantastic shapes abound: Coffeepot Rock, Cathedral Rock, Bell Rock. The town used to be off the beaten path, known mainly as a setting for Western movies. But it has been discovered by wealthy tourists, sporting enthusiasts, and New Age types. The New Agers arrived in the 1980s, attracted by the “vortexes,” magical and mystical places in the red rocks where electrical currents supposedly converge and in which, if you are in the right spot, you might have visions or even experience an out-of-body episode. Today Sedona is visited by four million people each year, and the town is filled with resorts, hotels, smart shops, outsized mansions, and gated condominium complexes .

Sedona is a hiking mecca, with trails crisscrossing the landscape in every direction. You can hike up Wilson Mountain and look down on the town from a perch high above the helicopters that take well-heeled tourists sightseeing. You can stroll along the West Fork of Oak Creek, crossing the water several times on stepping stones and ending up in a canyon where you must wade and swim in the stream for miles to continue your hike. You can scamper up the slickrock — so named because it gets slippery when wet in a hundred locations. If you’re adventurous, you can take a hair-raising “Pink Jeep” ride over the seemingly impassable rock-stepped buttes.

We have hiked several of Sedona’s trails and always had an exhilarating time. This past summer, we spent a month in Flagstaff and drove to Sedona three times to hike. Our last hike there was into Boynton Canyon, a box canyon that ends in a cul-de-sac of multi-hued cliffs. 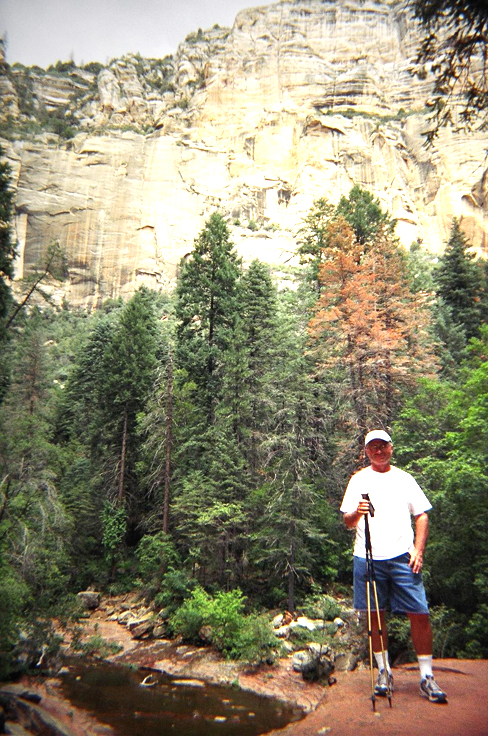 In every beautiful town like Sedona, there is a clash between public and private space. There are millions of rich people in the United States, and they want to own as much property as possible. The more desirable the place, the more they want to possess it. Most of Sedona’s hiking trails are on publicly-owned land, under the administration of the National Forest Service or a state public land agency. However, public lands have always been available for private development in the United States. They have been used for animal grazing, mining, fishing, lumbering, even ski resorts. Dams on public lands provide the water for our desert cities, like Las Vegas, Phoenix, and Los Angeles. The Forest Service posts a sign that states, “Land of Many Uses.” 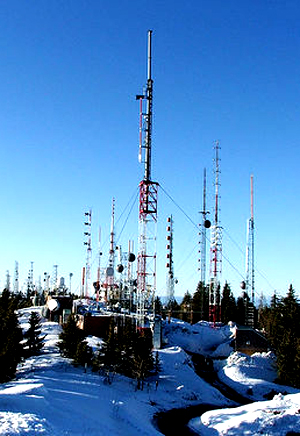 High above Albuquerque, New Mexico, at Sandia Peak, there is a mass of communications towers on public land. The Forest Service calls it a “steel forest.” Without irony. On some public lands, there are parking, picnic, and concession areas, and these are now routinely contracted out to private companies, which are responsible for maintaining trails, restrooms, and the like and which often charge a not insignificant entrance fee. This incensed us, since we had already purchased a pass giving us permission to use public lands.

We were attracted to the Boynton Canyon hike by the description in our hiking guidebook: “This scenic and most visited box canyon in Sedona is also a vortex site. Ruins dot the red sandstone canyon walls. Towering buttes, crimson cliffs, and a quiet trail on the cool canyon floor all add up to magic, vortex or no.” This book had never failed us. Each hike had been more spectacular than the last. Our excitement grew as we parked our car at the trail head.

We had decided to visit the vortex site first. We walked a short distance along the main path and took a spur trail up to the Boynton Spires and the Kachina Woman monument. It was a clear cool morning; the heat of the day had yet to set in; and the sky was the pure blue color you see only in the desert West. We were admiring the beauty of the rocks and wild flowers as we climbed up the slick surface toward the spires. A sign pointed to the end of this part of the trail, at the top of the boulders. We anticipated a spectacular view of the canyon. But at the crest, in the shade of the spires and monument and amidst the juniper trees, cacti, and wild flowers, we looked over the other side and saw a sprawling private resort, right at the mouth of the canyon and privy to the best views. We sat and surveyed the scene for awhile, growing increasingly distressed. The resort consisted of many buildings spread out over one mile in length and taking nearly the entire width of the canyon. Cars and delivery trucks drove in and out; lawnmowers gave forth an annoying buzz-like drone; women in tennis whites slapped balls over the net; and golf carts hauled players over manicured greens, which contrasted sharply with the desert terrain all around. Besides the condominium apartments, there were lavish private homes, some built right into the hillsides. Construction workers mixed cement, carried lumber, pounded nails, and ran power tools, adding to the general din. The Kachina Woman must weep every day to see the desecration of her sacred canyon. How we wished we hadn’t seen this overview. The highest point on a trail is always special. Except here.

We returned to the main trail and began to traverse the canyon. Immediately, we were shocked to see that we would have to walk alongside the resort, hard up against a tall and imposing boundary fence. We complained about the resort as we hiked past it. We asked each other how this resort gained control of so much of the canyon. Did the guests find it natural that they were behind locked gates and needed keys to access the trail from the resort? What was the fence protecting? Shocked as we were by the resort’s intrusion into a dazzling natural landscape, we were completely taken aback by the sign posted at the spot where the resort buildings and the trail were closest to one another. There on the fence was posted the following:

TRESPASSERS WILL BE PROSECUTED 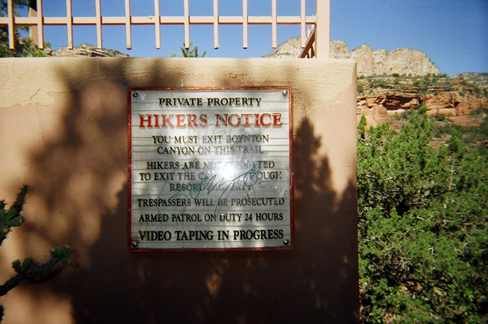 Here the ugliness of private property reveals itself. We looked up at the surveillance camera and made obscene gestures.

The resort continued beyond the sign, finally ending nearly an hour after we had begun the hike. We walked up the canyon through the late summer wild flowers and stands of tall ponderosa pines. On a hike in Bandelier National Monument in New Mexico, we learned that these trees are the source of the artificial flavoring agent vanillin. If you come upon a ponderosa, stop and sniff the bark. It smells strongly of vanilla. When it is hot, the trees will perfume the air. Eventually the path slopes sharply upward through trees, rocks, and bushes, until you come to the end of the canyon. We climbed the slickrock to a spot under a juniper tree, ate lunch, and admired the subtly colored canyon walls, enclosing us all around. We enjoyed the solitude and after awhile began the steep descent back to the trail. We walked peacefully along it until we came again to the resort. We stopped to contemplate the sign and wished that some misfortune would erase this monument to the selfish rich forever.

We returned to Flagstaff and, curious about the resort, did some research. The name of the place is Enchantment Resort, and here is how it advertises itself: “surrounded by the majestic red rock formations of Northern Arizona’s Boynton Canyon, Enchantment Resort combines luxury with rugged grandeur inspired by Native American culture. The resort’s adobe casita-style accommodations offer world-class comforts amid its pristine 70-acre setting.” Nightly guest rates run from $295 to a whopping $2,005. But you get a lot for your money. In addition to the three restaurants, the Tii Gavo “casual” restaurant features a “signature drink,” a prickly pear margarita, guests can go on nature walks with a U.S. Forest service ranger or take guided hikes, experience a “journey of teas,” and attend gourd pottery art classes, wine tastings, vortex lectures, narrated star gazings, or Native American Guest performances. There is golf, swimming, outdoor whirlpools, championship croquet, bocce ball, and ping pong. Best of all is the Mii amo spa, voted by readers of Travel & Leisure magazine as the number two destination spa in the world.

The Native Americans used ground corn to cleanse and purify the skin. We blend our blue corn with mineral salt crystals and aloe vera to make a vigorous scrub, polishing your skin to perfection. Next indulge in a ‘La Stone’ massage, using hot, smooth river rocks to melt away tension. We recommend having lunch at the Mii amo CafÇ before completing your spa day with a custom facial. One of our experienced aestheticians will evaluate your skin and design a facial specifically for you.

Just the kind of place Oprah Winfrey might go for a weekend to get in touch with her inner spirit and be part of nature. The repeated references to American Indian cultures are both inaccurate (what does it mean to say that the “rugged grandeur” of the place is “inspired by Native American culture?” The Indians didn’t build the canyon.) and typical. The wealthy whites who come here want to appropriate the Indians’ culture just as they want to have the canyon. This desire for the Indians in fantasy contrasts markedly with the indifference or hostility to the actual poor Navajo and Zuni Indians who live a short distance away.

The National Forest Service, which administers the Boynton Canyon trail, controls millions of acres of public land. But while the land is owned by all of us, the Service routinely leases it to private businesses, often at rock-bottom prices and for purposes that destroy the very land entrusted to this government agency. So it is no wonder that private landowners often come to feel that public land is theirs to exploit. While Enchantment Resort is private property, the
canyon that makes it attractive is not. In Sedona, as elsewhere in the country, the tension between private and public domains is growing. Unfortunately, the public will not likely be much enchanted by the outcome. 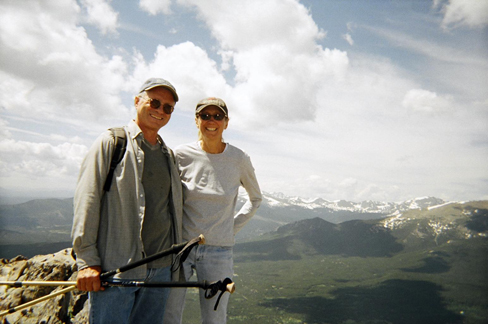 Michael and Karen are husband and wife. They live in Estes Park, Colorado. This is their first joint publication. Watch for Michael’s new book next year, Cheap Motels and a Hotplate: an Economists’s Travelogue, to be published by Monthly Review Press.