Early on, in Anand Patwardhan‘s Bombay, Our City (1985), a passionate film made with the working people who live in Bombay’s slums and are coping with and organizing against their displacement by the police, the bureaucracy, and the business community, a woman reproaches the filmmakers. “Why do you take pictures of the poor?” she asks. “You will make money and fame and what will happen to us?” “Don’t take our pictures,” she tells the filmmaker. Zana Briski and Ross Kaufman, the directors of this year’s award-winning documentary, Born into Brothels, on the children of the sex workers of Calcutta, are unencumbered by any such challenges.  Patwardhan fought a lengthy legal battle to get his film screened on Indian television while Kaufman and Briski have tried to stop the screening of their film in India.1  It was one of the films’ subjects, an old woman from the Bombay slums, who accepted the national film award that Bombay, Our City subsequently won while Briski and Kaufman, proud receivers of this year’s Oscar,  have refused to show their film to the sex workers of Calcutta despite repeated requests by their union, the Durbar Mahila Samanwaya Committee.2

It is incredible that Briski and Kaufman should then emerge overwhelmingly in film reviews, including one by Roger Ebert, as “well meaning people who want to make a difference” and “change lives through art.”3 Incredible, because a film that purports to give voice to its subjects cannot keep them in the dark about how it represents them.  However, the filmmakers can pull off this conceit if we accept their basic assumption that white people have the mission to civilize Others by saving their children from them.  Unless we accept this basic premise, the film does not hold together as a film.  In other words, our liking this film means an implicit acceptance of its ideological position even if we did not know of the relationship between the filmmakers and their subjects, both during the making of this film and its subsequent success.

The film rehashes the old imperialistic narrative of the White Man’s Burden, except that the role is played by a woman on screen and in the real world (Briski makes clear that the film was her idea).  This is not a new casting.  White bourgeois women, including some feminists, have embraced this “civilizing” role since the early 1900s. 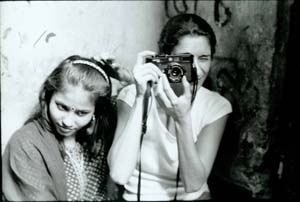 Such is Briski’s sense of entitlement that she does not question her persistent efforts to photograph a group who, by her own admission, do not want to be photographed.  Nor does she consider it necessary to thank the adult women who must have offered her a home while she lived in Sonagachi.  Instead, what we get in the film is the story of self-discovery and adventure of a lone heroine, one who develops from an artist/photographer into an advocate for children.  Briski tells us that she is not a social worker but a photographer who “does not understand” what pulls her to the red light area in Calcutta.  However, once there, she is drawn to the children and starts training them to take photographs of their community.  Seen cynically, this can well be understood as a ruse to make the children do what she herself was unable to, to serve as her proxy in photographing adults who had previously refused her. 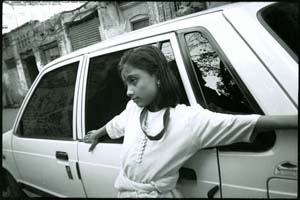 The children, however, go beyond her lessons which include praises for “boldness” in photographing unwilling adults and start to take wonderful pictures of the things and people they love: their siblings, each other, the beach, and the animals in the zoo. It is Briski’s camera (and Kauffman’s and Nancy Baker’s editing) that juxtaposes shots of animals in cages with the children’s faces.  It is Briski’s eyes that dwell on a child whose foot is in a chain and the silent faces of children as they cope with a vicious lashing-out between their care givers, women who demean each other in the language of a society they are forced to serve as prostitutes.

I am not saying that Briski should have ignored the facts and created a sentimentalized idealization of these children’s lives. Nor am I arguing that Briski should not have made a film about the children of Sonagachi because she is a white woman.  Filmmakers are entitled to, in fact, obligated to turn their cameras to the horrific conditions large numbers of people are compelled to live in today.  However, filmmakers have to account for the power relationship between them and their subjects.  When Michael Moore in Farenheit 9/11 (2004) goes around asking U.S. senators if they have a family member among the troops in Iraq, we cheer him for his audacity because he is asking a question to power.  Enabled by his camera, he does what any citizen in a democracy should be able to.  Briski’s subjects, on the other hand, are at the other end of the power equation from her.  Not only are they children — they are also the most vulnerable and marginalized children.  Moreover, their mothers, whom Brinski bypasses in so cavalier a fashion, cannot hold a candle to the sexual and economic freedom she has.  She can come and go as she likes while, for the sex workers of Sonagachi, tales of individual escape are the stuff movies are made of.  Why, even Hollywood’s most recent offering about escape from prostitution, Pretty Woman (1999), winked its way to the box office presenting itself as only a movie — with such cool postmodern additions as a narrator who walks into the film-frame in the film’s opening and delivers its caveat emptor in the end: “Some dreams come true, some don’t, but keep on dreamin’ — this is Hollywood. Always time to dream, so keep on dreamin’.” Partha Bannerjee, who translated for the filmmakers and subsequently distanced himself from the project, has asked why the filmmakers chose to completely bypass the local activists whose efforts have significantly reduced crime, AIDS, and poverty in that area.4

Instead, Briski emerges as the only person in all of Calcutta to care about these children.  The long close-ups of her thoughtful face, shots of her walking the streets, and frustrated conversations with petty bureaucrats all emphasize her lonely crusade.  I have to admit that, in spite of my own long-term experience with the cultivated inertia of the Indian bureaucracy, I laughed when the petty keeper of record beats his head with his hands, refusing to comply with Briski’s requests. Not that I was amused to see her efforts to get one of the children a passport to travel to Amsterdam fail.  What I found funny was that Briski was getting just a tiny taste of the mountains of obstacles that stand in the way of the children’s mothers, in their daily struggle for survival in Sonagachi . . . and yet she is completely oblivious to that.  Never once does Briski put her own experience in perspective. There is no room for such self-reflection in her single-minded self-promotion as the children’s only well-wisher whose sole solution to the children’s plight is to take them away from their mothers and their community.

Briski’s blindness to women of Sonagachi — mothers of children she professes to care about — brings me to the second assumption that underlies this film, i.e., its incredibly cruel patriarchal and racist premise that mothers should willingly give up their children to their “betters” who will educate and socialize them into forgetting, denying, or betraying their mothers. 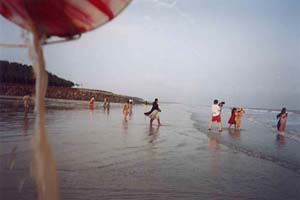 The film, ironically released around Mother’s Day this year, celebrates in slow motion and with music the children’s joy when they are taken out of Sonagachi (their outing to the beach and the zoo), preparing us to accept the assertion that taking the children away from their mothers is necessary and good for the children.

The presumption that the children would be better off without their mothers is not even practical, even if we can get past its cruelty.  For example, rather than send the children to a boarding school run by missionaries, far away from their mothers, would it not ensure greater participation if a school was to be built in Sonagachi with the mothers’ participation? Granted, this broader activist direction would be inconsistent with the band-aid reasoning of the film which proposes rescuing individuals rather than changing structures.  However, there was another solution still possible within the film’s logic.  Rather than move just the children, the solution could be to move the entire family out of Sonagachi into another area in Calcutta where the children could go to school while still living with their mothers.

Both these solutions, however, were ruled out by the film’s imperialist assumptions.  The myth of the White Woman’s Burden can only be maintained if the mothers of Sonagachi are shown to be the Other, i.e., so unlike “us” that they would not want the very best for their children, which is all that “we” want. It is this narrative logic which makes us view with disappointment the children’s refusal or inability to stay in the boarding school and the excuses mothers and grandmothers give to postpone their children’s departure, such as, the old grandmother who insists that her child will not leave on a Thursday.  Faced with this “culture of failure,” Briski and Kaufman can wring their hands and leave to claim their award.

There is no comprehension here of the trauma and difficulties that children of prostitutes would face in the outside world nor of what is being asked of their mothers.  In one sequence, the missionary who runs the boarding school lays down the rules.  He tells the mothers that they would see their children only during vacations and at no other time.  No pathos-filled music or close-ups accompany this sequence.

It is well worth quoting Swapna Gayen, who wrote the letter on behalf of the sex workers’ union, here at length:5

The film is a one-sided portrayal of the life of sex workers in Sonagachi.  It shows the sex workers as unconcerned about the future of their children.  This is not true.  Being a sex worker and a mother, I can say that we are more protective as mothers than can be imagined.  The documentary does not shed light on the valiant efforts of the sex workers to unite in order to change their lives as well as that of their progeny.

In conclusion, it can be said that the valiant efforts of the mothers do indeed show up, in spite of the filmmakers’ best efforts.  They show up in the amazing innocence, curiosity, and imaginativeness of their children.  Unless one is completely blinded by patriarchy and imperialism, one has to acknowledge that the mothers and the community of Sonagachi must have played a part in nurturing their children’s spirits.  In all other respects, this film will go down as just another stale offering from the Empire, which has to continually keep harping on its civilizing mission lest we question its aggressive global interventions today.

2 See the letter written by the union representative Swapna Gayen, “Nightmares on Celluloid,” The Telegraph (15 March 2005). The letter is included in Podur (8 April 2005).

Jyotsna Kapur teaches in the department of Cinema and Photography, Southern Illinois University. Her book Coining Capital: Movies, Marketing, and the Transformation of Childhood was published by Rutgers University Press this year. Her research and teaching interests are documentary and ethnographic film, the Japanese and German New Wave, postmodernity and globalization of media industry, and critical theory based on Marxism, socialist-feminism, and race.