The scene outside San Quentin last night was amazing. People had started arriving at the prison gates in the early afternoon, soon after Governor Schwarzenegger announced that he was denying clemency for Stan Tookie Williams. By the time I arrived, shortly after 8:00 PM, the crowd had swelled to 1,500, and for the next four hours, people kept coming. Two thousand, three thousand — after that, it was impossible to keep count. 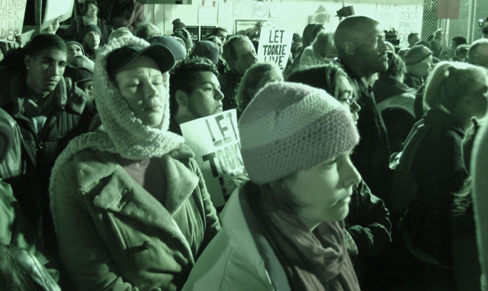 Young and old, blacks, whites, Latinos and Asians, Christians, Buddhists, Muslims, socialists, and just plain outraged . . . all made the long trek to protest the legal lynching of an African American man who had atoned for the crimes that he did commit and who was being killed for those that he did not. A handful of right-wing provocateurs, hoping to provoke a clash with their message of racism and hate, were surrounded and quickly pushed to the margins, where they could not disrupt the rally.

There was great sadness that the fight to save Stan’s life and prevent another senseless death had been lost. But unlike most other executions I’ve protested outside San Quentin, the mood was not somber but angry and defiant. One electric speaker after another addressed the crowd. Joan Baez sang and declared, “Tonight is a planned, efficient, calculated, antiseptic, cold-blooded murder.” Angela Davis praised Stan and Mumia Abu Jamal as the most eloquent voices against the death penalty and placed them in the context of black radical struggles. Exonerated California death-row inmate, and former Black Panther, Shujaa Graham drew the parallels between his life and Tookie’s, and explained how he had escaped execution in spite of the system, not because of it.

Derrel Meyers, whose own son was murdered on the streets of San Francisco, spoke powerfully against the death penalty, placing the blame for violent crime first and foremost on a system in which poverty and racism are endemic. Oakland teacher Jessie Muldoon related how Stan’s words and the movie about his life, Redemption, connect with the inner-city kids in her classes. Several young people told the same story from their own firsthand perspective, talking about the impact of Stan’s message on their lives and reading from his books.

Every execution, whether of the guilty or the innocent, creates new victims, but none more so than this one, in which the voice of a man who has spent the last twelve years speaking out against gang violence, successfully persuading thousands of kids to leave or stay out of gangs, was silenced. The tortured logic of Schwarzenegger’s “Statement of Decision” attempts to deny this. According to the Governor, “the continued pervasiveness of gang violence leads one to question the efficacy of Williams’ message” — which is like denying the efficacy of aspirin because people still get headaches. Predictably, he ignored the thousands of messages from parents, teachers, teens, and younger children, testifying to the positive impact of Stan’s writings and their life-changing influence.
The rest of Schwarzenegger’s statement is even worse. It claims that there are no “significant doubts” about Stan’s guilt because his case has been fully reviewed by the courts. But a recent examination of the evidence by the San Francisco Chronicle showed that significant doubts certainly existed.

The prosecution’s case was based on circumstantial evidence and the testimony of witnesses “whose credibility was highly suspect,” U.S. District Judge Stephen Wilson wrote in 1998. He noted that there were no eyewitnesses to the shotgun murders of three people at a Los Angeles motel and that the only testifying eyewitness to the killing of a convenience store clerk was “an accomplice who had a strong motive to lie.”

Four years later, the Ninth U.S. Circuit Court of Appeals voiced similar qualms, saying the prosecution had relied on witnesses with “less-than-clean backgrounds and incentives to lie” to win lenient treatment for their own crimes.

In the days leading up to the execution, new evidence that Stan was framed emerged and was simply ignored. Having dismissed questions about the conviction, the Governor then concludes that since Stan will not apologize for crimes he has always denied committing, “there can be no redemption.”

Even more outrageous, however, is the following passage from the “Statement of Decision”:

The dedication of Williams’ book “Life in Prison” casts significant doubt on his personal redemption. This book was published in 1998, several years after Williams’ claimed redemptive experience. Specifically, the book is dedicated to “Nelson Mandela, Angela Davis, Malcolm X, Assata Shakur, Geronimo Ji Jaga Pratt, Ramona Africa, John Africa, Leonard Peltier, Dhoruba Al-Mujahid, George Jackson, Mumia Abu-Jamal, and the countless other men, women, and youths who have to endure the hellish oppression of living behind bars.” The mix of individuals on this list is curious. Most have violent pasts and some have been convicted of committing heinous murders, including the killing of law enforcement.

But the inclusion of George Jackson on this list defies reason and is a significant indicator that Williams is not reformed and that he still sees violence and lawlessness as a legitimate means to address societal problems.

Of those convicted of “committing heinous murders” on this list, two (Geronimo Ji Jaga Pratt and Dhoruba Al-Mujahid Bin Wahad) were later found to have been wrongfully convicted after serving a combined forty-six years behind bars, and four (Assata Shakur, John Africa, Leonard Peltier, and Mumia Abu-Jamal) have always proclaimed their innocence and are widely believed to have been framed. George Jackson, whom Schwarzenegger apparently regards as the epitome of “violence and lawlessness,” was convicted of stealing $71 in 1960 at the age of 18, sentenced to an indeterminate sentence of 1 year to life, became a Black Panther and political leader in prison (which Schwarzenegger equates with forming a gang), charged but never convicted of killing a prison guard, and assassinated by guards in 1971.

It seems that Stanley Williams’ real mistake was choosing to honor the wrong people. The system loves those who advocate peace and nothing more, but not those who believe that genuine peace is inextricably tied to justice. Since Stan, by the company he placed himself in, was implicitly challenging the status quo, his claims to be a peacemaker and to have undergone redemption could be rejected out of hand. Thus in a very real sense, his fate was decided, at least in part, by his politics.

It was also decided by the Governor’s cynical calculation that denying clemency was the best way to shore up his political fortunes, and in particular to mend bridges with the far right of the California Republican Party. In the days leading up to the execution, the media was full of sensational reports predicting riots if clemency was not granted. But as one Los Angeles activist responded, “Everyone is so worried that Black and brown people are going to riot if Williams is executed. I’m not. I’m more worried that white people are going to start a riot when he’s given clemency.” That was the sentiment to which Schwarzenegger was responding.

None of this was lost on those protesting outside San Quentin on Monday night and into the early hours of Tuesday. There was mourning (and fury) at the announcement of Stan’s death. But there was also hope that out of the failed struggle to save his life a new movement to oppose the racist death penalty in California was being born. That is something that Stan would have been proud to know.

Phil Gasper is Professor of Philosophy at Notre Dame de Namur University in California and a member of the Campaign to End the Death Penalty. He nominated Stanley Williams for the Nobel Peace Prize five times. He can be reached at pgasper@ndnu.edu.

Phil Gasperis the editor of The Communist Manifesto: A Road Map to History’s Most Important Political Document (Haymarket Books, 2005) and Imperialism and War: Classic Writings by V. I. Lenin and Nikolai Bukharin (Haymarket Books, 2017). He is the ISR reviews editor, and writes a regular feature in the ISR, "Critical Thinking."