The Edward R. Murrow movie Good Night, and Good Luck reminded me of one of my most unpleasant — but gutsy, I guess — moments in life. 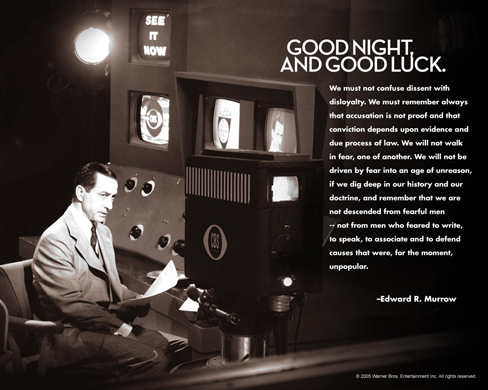 As a newly elected Selectman of Weston, Connecticut, I worried about the growing influence of Mr. McCarthy, his Communist witch-hunt, and kept wishing I had some clout to do something about it.

I read about the upcoming Murrow broadcast on March 9, 1954, supposedly on Joe McCarthy, and tuned in.  I was then 28 years old and Murrow was my hero.  I was a staunch Republican, who was just learning what the Party stood for, from a master politician, by the name of John Mather Lupton, in our small town of Weston (population then about 3,000).

I watched Murrow carefully deliver his thesis, but with an uncanny, non-legal fluency, which tore McCarthy right off the television screen.

I had a 16 millimeter projector, and I spent the next morning trying to figure out how to get the tape of that broadcast.

It took me two days, but I finally got a few dozen words with Mr. Murrow.   I told him “I want to show your broadcast in the Weston School cafeteria.  Would you consent to lend me the 16 millimeter tape?  I’ll do the rest.”

He said he would tell Dorothy Loeffler at CBS, “who might be helpful,” and she was.

I would have the tape in two days, for one showing, and had to return it in 24 hours from the showing.

The School Principal (I wonder if he was a Republican or Democrat) made a quick decision to OK the project.  I printed up a flyer and handed it out that afternoon to every student who came out of the main door.  I got 20 people to call every name with a Weston address and telephone number, and tacked up signs wherever I thought there might be heavy foot traffic.

I hoped for 150 to 200 people coming on the Thursday after Murrow’s broadcast.  500 came, and we had to set up, with preternatural speed, outdoor speakers.

The applause was, well, I guess, in show business terms, “2 thumbs up.”  I took the tape back to Ms. Loeffler, and she looked into Murrow’s office at 480 Madison then, and said, “That young Mr. Fine just brought the tape back.”  Murrow popped out and asked, “How did it go?”  I told him 25 percent of the whole town showed up.  He smiled, lit a cigarette, and walked back into his office.  He said something nice over his shoulder that I couldn’t quite hear; maybe it was “Good Day and Good Luck.”

That wasn’t the end of it.  That Sunday, the head of the Connecticut Republican Committee, Raymond E. Baldwin, called and said he was in a nearby town and would like a word with me.  I told him where we lived, and he couldn’t have been far — he was there in 15 minutes.

He asked where we could be alone, and I closed the door of the dining room.  He didn’t sit down, but walked around and around the table before he spoke.

“Well, Boy Scout, are you pretty proud of your production last Thursday?”  I should have taken a hint from him calling me “Boy Scout,” but I didn’t.  “Yes,” I said.  “Well, let me ask you, do you know the Republican plurality in the Senate?”

“One or two,” I stuttered, and then said, “One, we have a one seat majority.”

“Yes,” he said, “and that seat is occupied by Senator Joe McCarthy.  Let me give you some advice.  Before you do some more harm on a bigger stage, resign from your post and our Party.”

He didn’t say “goodbye” or even “good luck,” but 25 years later, Fred Friendly, Murrow’s producer for most of his life, and I, drove from Washington to New York, because the shuttle had shut down for bad weather.

We had met briefly before, but the ride took four and a half hours, and he said “Weren’t you the guy who roused a Connecticut town, and help bury McCarthy?”

That was more credit than I deserved.  But I never ran for elective office again.  I did receive appointments from President Reagan, Carter, and the senior President Bush.

I hope Edward R. Murrow might hear me now echo his “Good Night, and Good Luck.”

Bill Fine was, in the past, a publishing director at Hearst Magazines, Chief Executive of Bonwit Teller, U.S. Advisor on the Anglo-Irish Accord, and advisor to Jimmy Carter on SaLT.  He resides in Lyme, Conn.