I don’t know how or when the New York City Transit Strike will end.  It may even end prior to your reading this column.  The point is that the members of Transport Workers Union, Local 100 — the men and women who run New York City’s public transportation — deserve our support.

Over the last twenty or so years, New York City has come to resemble the Emerald City of mythical Oz.  In the name of cleaning up the city, the working class is being cleaned out.  The ability to live in the historic communities, for which the City of New York is so well known, is becoming a thing of the past, as areas further gentrify and the overall cost of living skyrockets.  Unless one is in a rent-controlled apartment, one has to look for housing either on the outer margins of the City, or outside of the City entirely.

The strike that truly commenced on Tuesday, December 20, 2005, is a strike against the notion of New York being the Emerald City.  It is a strike of workers who are insisting that they, as working people, have the right to work AND live in the City of New York.  That means that they must have wages and benefits that make it possible to live stable lives.  It must mean that the conditions of their employ are safe and secure and that they are treated like human beings rather than as trained animals.

Yet the strike is about something else as well.  The Metropolitan Transportation Authority is trying to sneak in something very familiar to workers around the USA.  They want a two tier situation, that is, a differential in the treatment between newer workers and older workers.  In this case, newer employees would pay more in healthcare and get worse pensions than older employees.  Two-tier situations are toxic.  The newer employees come to resent the older employees, feeling that they have been sold out or sacrificed.  It completely undermines the morale of a workplace and thereby has a detrimental impact on the ability to get the job done.  Thus, TWU Local 100 is right to stand up to this.

What makes this entire situation so completely bizarre is that the MTA has been running a substantial surplus.  In this situation, the demand for givebacks is completely absurd.  The only reason that givebacks could be demanded under these circumstances is to simply weaken the union and rub their noses in the mud.

In the press already there are two disturbing trends.  The first is the ignoring of the point of view of the workers and their union.  Enormous attention has been focused on Mayor Bloomberg, but precious little on the views and concerns of the transit workers.  How can you understand what is going on if the workers are ignored?  The second is this notion that the workers are greedy or already paid too much.  This is the crabs-in-the-barrel syndrome that we are all familiar with.  Rather than supporting those trying to break the sides of the barrel, there are those of us who are so worn down that we would rather enjoy the company of others in misery than take a stand on the right side of an issue.

The New York transit struggle is about the ability of working-class people to live and work in New York under conditions that are not on the verge of poverty.  When the transit workers say that this is about respect, it is actually respect not just for the transit workers but for New York’s workers.  Certainly the transit workers deserve respect on the job, but they and other workers in New York deserve to be respected as citizens of the City of New York rather than as temporary servants of an increasingly wealthy and arrogant elite.

The transit strike is not about inconvenience; it is about justice.  Let’s stand together with the transit workers! 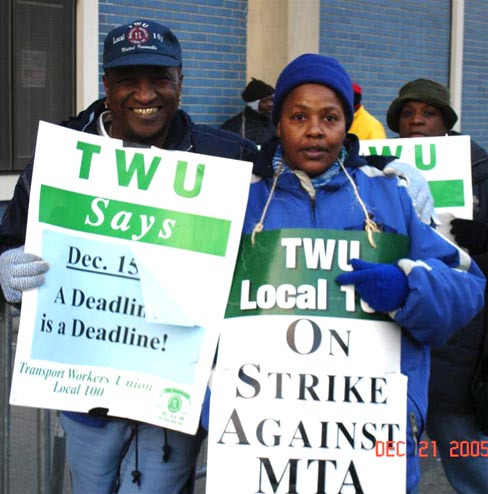 Bill Fletcher, Jr. is a long-time labor activist, formerly serving as the Assistant to the President of the AFL-CIO.  He currently serves as President of TransAfrica Forum.  TransAfrica Forum is the leading advocacy organization for Africa and the African Diaspora in U.S. foreign policy.  He can be reached at <bfletcher@transafricaforum.org>.