It was just last week, at a party in Sunset Park, Brooklyn, when I railed drunk that the chance of a strike was “zero.”  I ranted about the sell-out union leaderships and their habits of business unionism. I joked about Transit Workers Union Local 100 leader Roger Toussaint and the sorry path that even earnest militants take after getting digested by the labor bureaucracy.  Decades of defeat have created a healthy cynicism about the leadership of a union movement that doesn’t move and the dominant model of reducing workers’ struggles to only the nickels and dimes of contract bargaining.

Let me eat my shoe in shame.  I was wrong — there is a line the transit workers won’t cross. The workers of Local 100 refused to back down.  They are courageously facing New York’s draconian Taylor Law that makes any strike by public-sector workers illegal.  Fines of $1 million a day are being levied against Local 100; the strike leadership are facing jail; and the membership are threatened with $25,000-a-day fines (yet to be levied).  The TWU’s international leader Mike O’Brien tried to sabotage the strike.  He was duly ignored.  Local 100 is standing firm against a two-tier system for pensions and health care that will rob future generations of not just a living wage but the power of class organization.  They are striking over the right to strike.  This is not just about those nickels and dimes.

As of now, Roger Toussaint and two other leaders of Local 100 are being called before a judge today for representing the interests of the rank-and-file. Local 100 has called on strike supporters to converge on Central Booking (aka The Tombs) in the event of detention.

Local 100 is among the most proletarian of major unions in the country.  The majority of workers are from oppressed nationalities, do not tend to have higher education, and have earned a bottom-line standard of living through decades of militant struggle.  Local 100 has long demonstrated its ability to shut the world’s most powerful city down through strike action.  This is why its members are feared and disrespected.  16,000 citations are issued to workers a year for infractions of all kinds.  This is harassment.  The issue of respect on the job is a huge part of the conflict that few are discussing.  Strikes are about seizing dignity. 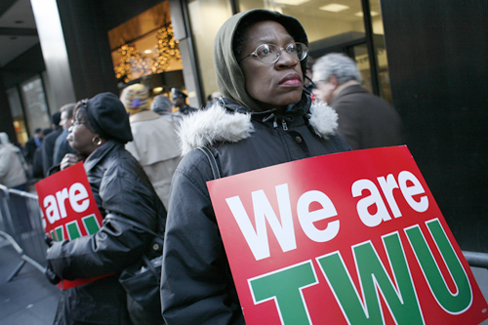 Support and opposition neatly break down along race and class lines, with the Sex in the City crowd appalled at their inconveniences, the tabloids howling bloody murder, and the working people — especially working people of color — of the city overwhelmingly of the sentiment that “this is our strike.”

It’s been rare in recent decades to see any major union take up a real fight. But when an entire city is shut down by the coordinated action of workers standing up for themselves against the most reactionary and anti-people politicians, the sides are as clear as the stakes are high.

Whatever our beliefs about the structure and ideology of North American unionism, this is a turning point for the working-class struggle in New York and even in the entire nation.  A defeat will be the final nail in the coffin of New York organized labor as a social force.  Victory could literally overturn the legacy of PATCO.

The TWU cannot be broken.  They are the only force in the city capable of literally shutting it all down, standing up to the racist political structure that spits on working people, and breaking the culture of passivity that is deeply entrenched not just in the union halls but in the hearts of the masses of people.  Direct action gets the goods, and we should all do our part — whatever that is.

It’s easy to put up signs of support in our own neighborhoods and to advocate for the workers everywhere we go.  All traffic is heading over the bridges, which gives a unique opportunity for outreach (of all kinds) as those who are still working head in.  A few well-placed banners, a little painting, a few random support mini-marches do wonders — it can begin to turn what appears at first as a simple matter of a 3.5% raise versus more money into a what it in fact is: class struggle.

Some communists, to say nothing of the larger activist milieu, have expressed skepticism about working-class action to the point of abstention.  There is a famous remark by Lenin that the model for militants in our movement should be a “tribune of the people” and not the shop steward.  If ever there was a need for a tribune to tie the strike to the underlying social issues — THAT IS NOW.

Every anti-capitalist worth their salt will be doing whatever is in their power to help this strike win.  This is a popular fight, not the property of the strike leadership.  Independent activity is a must. This strike needs the spirit of resistance in all its poetic glory that we can’t trust the mainstream media and official labor leaders to deliver.

Here is the list of picket locations throughout the city.  The base of Brooklyn Bridge is a great place for banners and signs of support.  Maybe even some red flags on the ground.

This is a battle over New York City — gentrification, “Giuliani Time,” a billionaire mayor, the whole issue of who owns this city.  If the TWU wins, we all do.  And the effect won’t just be in the paycheck of the workers directly involved, but in the capacity of everyday people to learn from their own experience that so much more is possible than what the bosses, media, and “authorities” demand.