I just got off the phone with Randy Rowland in Seattle.  For those readers who don’t know, Randy was a a GI resister and a member of the Presidio 27 — one of the first acts of GI resistance to the Vietnam War.

When I spoke with him, Randy had just returned from a Vancouver, BC showing of the recently released film Sir! No Sir!, which is a chronicle of the GI resistance movement against the US war in Vietnam.  Although the turnout was less than the organizers had hoped, Rowland told me that the overall experience was a positive one.  The audience was a combination of Canadian civilians, US expatriates and military deserters.  The film’s producers are hoping to create enough of a stir to interest a US distributor. 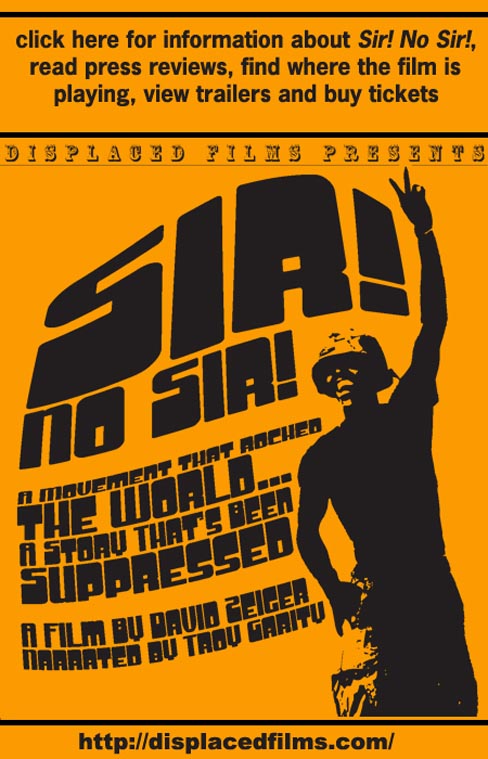 Rowland has been involved with independent media since the inception of the first IndyMedia Center (IMC) in Seattle prior to the actions against the World Trade Organization (WTO) in 1999.  This IMC was the first of its kind and was set up expressly to provide an alternative to mainstream reporting on the actions against the WTO meeting and the establishment’s response.  After the meetings were over, Rowland and some other members of the Seattle IMC began an independent media video news collective known as Pepperspray Productions.  Their films and reportage can be seen on Free Speech TV broadcasts and on the web, among other places.

The IMC was not Rowland’s first media involvement.  He was part of the staff of a Tacoma, Washington GI underground newspaper in the 1970s.  Tacoma is literally right next door to one of the largest US Army bases in the world — Ft. Lewis.  McChord Air Force Base is less than an hour away.  If those of us who work in independent media ever wonder about our reach and effectiveness, this anecdote that Randy shared should give us hope.  He was at a party a few years back and found himself in a conversation with a fellow veteran from the Vietnam era.  The two men had never met before this particular party.  As the conversation wound its way through the paths such conversations take, the fellow vet mentioned to Randy that the best thing he remembered from his days in the service was reading the Ft. Lewis underground paper.  In fact, it was that paper that helped convince this vet to oppose the war.

As we discussed the influence phenomena like the media can have, our conversation turned to the comparable impact acts of resistance also make.  To this end, Randy told how, even before he decided to oppose the war,  he had a picture of Dr. Howard Levy on his wall.  Rowland was a medic and Levy was a military doctor who went to jail for refusing to train Green Berets.

I asked Randy what the differences he saw between today’s GIs and those he served with, especially in terms of today’s lack of conscription.  While he acknowledged that the soldier in a conscripted army starts his service with an attitude already in place, many enlistees soon developed a very similar negativity towards the military.  Drawing on his experience as an enlistee who grew up in a military family, he noted that it was quite often the enlistees who opposed the Vietnam war the strongest while they were in uniform and after they got out.   It is, Rowland reminded me, more difficult to desert than it is to go along.  The deserter is potentially giving up considerably more.  At the same time, however, a GI who deserts is no longer taxing their conscience daily.

This naturally led me to bring up the question about supporting the troops.  How does one do this?  Or, better yet, should one?  Rowland replied with an anecdote from his  work as a nurse in the trauma unit of a Seattle area hospital.  He told me that he recently cared for a woman who was in a car accident because she and her husband were celebrating her twenty-first birthday and drank too much.  While driving home, they wrecked their car.  She ended up in the emergency room and her husband ended up in jail.  This soldier did not want to go back to Iraq.  According to the man’s wife, her husband drove a Humvee in Iraq.  When he was driving the vehicle, his orders were to never stop and, if something got in his way, to just run it over.  Children, animals, whatever — just keep going.  This was not what the fellow had in mind when he joined the service and, when he had the opportunity to stop doing this, he took advantage of the moment and went AWOL.  Rowland pointed out to me in a followup email that the point of this story is that here is a guy whose impulse is to not run over living things, but whose fate is that he is criminalized for being a decent human being. Furthermore, he continued, in a war of aggression, those who are criminals get medals, and those who find their humanity are punished.  In short, wrote Rowland, “A lot of GIs are stuck in a hell not of their own making, where they are being asked to do the wrong things. They either do it or don’t do it, both are shitty choices. I understand and sympathize with them in their delemma. I don’t uphold doing the wrong things, and I’m sure some of those who do wrong things at the time will come back and speak out against what they were ordered to do. Of course, as a GI resister myself, I am especially proud of and especially support those who figure out some way to not do the wrong things.”

If we are going to stop the US war in Iraq, the men and women in the military who oppose the war must be encouraged to resist.  Based on his interactions with active duty soldiers and Iraq and Afghanistan war vets, Rowland believes that the numbers of GIs who fall into this category are growing exponentially.  His understanding is corroborated by others in the antiwar movement.  As our conversation wound down, Randy related a story about some Vietnam vets who opposed the US contra war in Nicaragua during the 1980s.  These vets, explained Rowland, went to Nicaragua and walked roads that had been mined by the CIA-commanded contra forces.  The roads carried schoolchildren to school every morning, and the contras had laid the mines with this knowledge in mind.  In short, the contras were trying to kill the schoolchildren.  To prevent this, these antiwar vets became human minesweepers, risking their lives to ensure that no CIA mines would kill innocent children.  This, explained Rowland, is what we who oppose the current wars must do — in essence, put ourselves between them and their war.

The people in power in the US, both Democrat and Republican, want control of the world’s oil supplies so that the class they represent can dominate the world. As we all know, a good deal of that oil lies under the sands of Iraq.  The rulers of this country, as Rowland’s tale about the contras and their mine placement illustrates, will stop at nothing to get what they want.  It is up to those who oppose their designs to prevent them.  This is more possible now than before, if only because most US residents now oppose this war and do not consider the oil or controlling it to be worth the cost in human lives.  Indeed, noted Rowland, most US consumers could care less who controls the oil and wonder why the government just doesn’t work out some deal and buy the stuff.  Given the fact that their fingers are quite literally on the trigger of the Empire’s guns, GIs can play the greatest role.  Our conversation ended with Rowland quoting the German poet and playwright Bertolt Brecht:

GENERAL, YOUR TANK IS A POWERFUL VEHICLE
It smashes down forests and crushes a hundred men.
But it has one defect:
It needs a driver.

General, your bomber is powerful.
It flies faster than a storm and carries more than an elephant.
But it has one defect:
It needs a mechanic.

General, man is very useful.
He can fly and he can kill.
But he has one defect:
He can think.
(“From a German War Primer”) 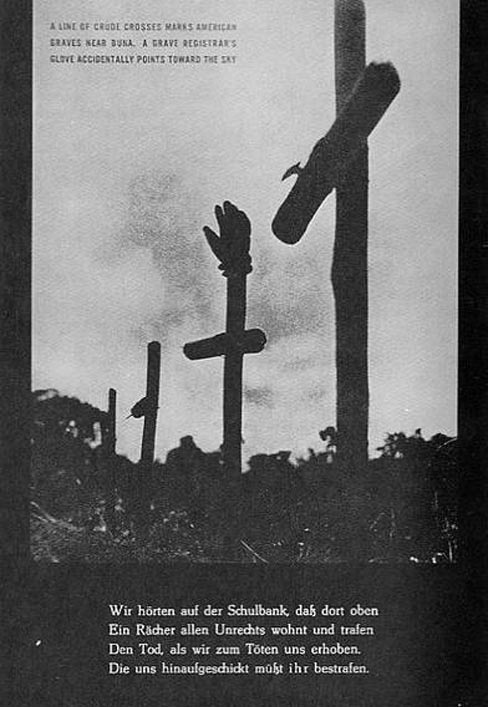