Physicians for a National Health Program held its annual meeting on December 10, 2005. Originally planned for New Orleans, it was relocated to Philadelphia after Hurricane Katrina. Founded in 1987, the organization has over 14,000 members nationally. PNHP advocates and educates for a single national health insurance plan: in the words of PNHP National Coordinator Quentin Young, MD, “everybody in, nobody out.” With about 250 in attendance, the meeting consisted of a series of panel discussions.

The PNHP “Proposal of the Physicians’ Working Group for Single-Payer National Health Insurance” has been published in the New England Journal of Medicine (in 1989) and the Journal of the American Medical Association (in 2003). Over 12,000 physicians endorsed the plan in 2003-2004. The proposed plan would cover all necessary medical care, including mental health and dental care, long-term care, hospitalization, and all prescription medications.

PNHP President John Geyman, MD, welcomed participants to the meeting with brief remarks. Former editor of The Journal of Family Practice and author of many works including the Textbook of Rural Medicine, Dr. Geyman has written several books on the crisis in American health care.

Dr. Geyman’s soon-to-be-released book Shredding the Social Contract: The Privatization of Medicare (Common Courage Press, 2006) was available at the meeting. He writes in its first chapter that “the great debate of the 21st century will be about how the new rules for a global market can be rewritten in the public interest. The current model of ‘corporate managed trade’ serves corporate self-interest at the expense of entire populations.”

Steffie Woolhandler, MD, PNHP co-founder and associate professor of medicine at Harvard Medical School, started the day at 78 rpm with a brisk update of the PHNP slideshow, an activists’ speaking tool that digests evidence from the medical literature of the injustice, inequality, and inefficiency of health care in the United States.

Dr. Woolhandler explained, for example, that it is a myth that those who have trouble paying for care are uninsured but young and healthy. In a study Dr. Woolhandler published this year with PNHP co-founder David Himmelstein, MD, Elizabeth Warren, and Deborah Thorne, “Illness and Injury as Contributors to Bankruptcy,” over half of those declaring bankruptcy were driven into debt by medical costs. Of these, three quarters of debtors had insurance at the onset of illness and three fifths had private insurance at the onset of illness!

As part of a panel discussion on market-driven health care, Adewale Troutman, MD, spoke. An author, with former U.S. surgeon general David Satcher, MD, of “What If We Were Equal? A Comparison of the Black-White Mortality Gap in 1960 and 2000,” Dr. Troutman illustrated, with the case of a 56-year-old African American woman, how the failures of the American health care system lead to avoidable death and suffering. He advocated using the terms “injustice” and “inequality” instead of “disparities.” He suggested Episode III of Race: The Power of an Illusion, which looks at the question of housing, as a useful video analogy to portray the systemic racism in U.S. health care.

A panel devoted to Canada proved so popular that an extra session had to be organized for continued discussion. Steven Barrett, an attorney who was counsel for the Canadian Labor Congress before the Supreme Court of Canada in the Chaoulli v. Quebec case, gave an overview of medical malpractice in Canada, which is scarcely comparable to the United States. (Among many differences, with a single-payer system like the Canada’s Medicare, future health care costs need not be considered in lawsuits.) Joel Lexchin, MD, emergency physician at the University Health Network in Toronto and author of over 60 peer-reviewed articles, spoke on the questions of pharmaceutical regulation and drug costs, comparing the U.S. and Canada. 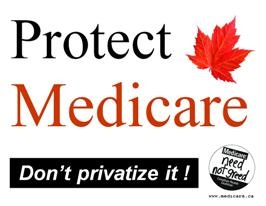 Public health official and family physician Rosana Pellizzari, MD, discussed the Chaoulli decision and the struggle to resist privatization of health care in Canada. Along the way, Dr. Pellizzari addressed the problem of waitlists in Canada’s health system. She included a slide of the lawn sign of the Canadian Health Coalition: “Protect Medicare: Don’t privatize it!” Dr. Himmelstein suggested that it was a yard sign that might do just as well south of the Canadian border.

Rocky White, MD, an internist from Alamosa, Colorado, a self-described “hard-core, dyed-in-the-wool, capitalistic, fee-for-service Republican” gave an animated speech. Dr. White became convinced of the need for a single-payer solution after his Nebraska multi-specialty group was forced into a buy-out by the local hospital in 2004 due to the increasing number of uninsured and underinsured. He called upon health care reform activists to work to unite diverse communities around the demand for single-payer health reform, no matter how deep disagreements on other issues might be. He quoted from the Bible to show how he has called upon his own conservative Christian community to stand up for the uninsured. Dr. White also spoke about Martin Luther King, Jr., the 1965 Selma march across the Edmund Pettis Bridge, and passage of the Voting Rights Act as a hopeful example of the tempo that large movements for social change may develop.

Founder of Vermont Health Care for All, Deb Richter, MD, a Vermont family physician and past PNHP president, spoke on the panel together with Dr. White. She showed slides from a talk she has given hundreds of times to make the case that health care reform is in the interest of business. She reported that business people respond favorably to the argument that much of health care costs are fixed infrastructure costs (perhaps more than 70%) that should be borne by the whole society. To illustrate, she tells business people that, when someone goes to the emergency room, we are not paying for the sick person but for the nurse who will be there at the ready.

Ana Malinow, MD, pediatrician at the Harris County Hospital District Ben Taub General Hospital Pediatric Emergency Center and co-founder of Health Care for All Texas, spoke on lessons from Hurricane Katrina. An organizer of the Houston Astrodome medical clinic — where over 15,000 patient visits took place over a span of two weeks, including 2,000 visits in one day, and at one point, 100 visits per hour — Dr. Malinow said that practicing medicine had never been so rewarding for the physicians involved: the emergency conditions forced bureaucracy and billing paperwork to vanish, leaving the doctor-patient relationship unfettered. She underscored the strain that Hurricane Katrina placed upon the already stressed Texas health system — following Hurricane Katrina, some 373,000 people re-located to Texas. (Of these, 59,680 had been covered by Medicaid.) The annual increased cost to the state of Texas could be about $1.6 billion — provided the health system can absorb the increased demand for services.

From Louisville, Kentucky, Garrett Adams, MD reported on the vigorous work the PNHP chapter there, particularly with successful interventions at a broad range of meetings, “including those to which we were invited as well as those at which we were not invited to speak.” Also in attendance from Louisville was Kay Tillow, Director of the Nurses Professional Organization, who has spearheaded an effort to gain union support for HR 676, “The United States Health Insurance Act.” At dinner, the Executive Director of the California Nurses Association, Rose Ann DeMoro spoke to the PNHP members. The California Nurses Association recently merged with the AFL-CIO with the specific goal of leading a union campaign for a single-payer health care system.

Dr. Himmelstein, as a panel respondant, offered remarks on the importance of unconventional thought and a diversity of approaches to building a movement for a single-payer health system — just as the diversity of patients demands a diversity of doctors. He told a story of a patient, a smoker, who had suffered a heart attack. After the episode subsided, the patient went to see a cardiologist. The cardiologist asked if the patient had quit smoking. The patient replied that he had smoked for decades and had no intention of quitting just because he had had a heart attack. The cardiologist, an intense and excitable man, began jumping up and down, swearing at the patient and yelling words to the effect that he would “not take care of a goddamned smoker.” This so frightened the man that he quit smoking — “which is either brilliant medicine or utter malpractice,” Dr. Himmelstein concluded.

Don McCanne, MD was welcomed by warm applause as he participated in afternoon panel discussions from the stage. He is the author of the listserv Quote of the Day, which PNHP activists rely upon. He concluded his remarks on the strategy for health reform by saying: “We have a mission to educate. We will educate our colleagues, the policy community, the media, and our patients.”

Andrew D. Coates, MD, is a member of Physicians for a National Health Program.