Meanwhile, auto parts maker Delphi pushed back the deadline for its bankruptcy proceedings twice — leading observers to wonder whether the corporation was dragging its feet now that its workers do not seem ready to concede.

UAW leaders had been slow to react to October’s vast concession demands from Delphi, but they have begun taking steps towards mobilizing members and have talked about a fight to come. Delphi first announced a delay to January 20 of its deadline for imposing these concessions — which include wage cuts of over 50 percent — through a bankruptcy court. On December 19, Delphi announced yet again it would delay bankruptcy proceedings until “at least February 17.”

Four large meetings, each with over 150 rank-and-file workers, have been held in Midwest communities near Delphi plants to discuss strategy. A fifth meeting was held in St. Louis December 11, and a sixth in Lockport, New York. Two more are planned for January in Milwaukee and Troy, Michigan.

The meetings have focused on “working to rule” — using workplace rules to “legally” slow work down — in order to cut production and prepare for a strike. UAW leaders have stated that a strike is a definite possibility.

A December 11 meeting in Flint, Michigan was attended by 180 rank and filers who invoked the UAW’s 1937 Flint sit-down strike and the power of rank-and-file activism. Workers reminded each other that benefits like “30 and out” retirement came from “bottom up” organizing.

Gregg Shotwell, a Michigan Delphi worker who has spearheaded the rank-and-file organizing, told the Flint crowd: “This is our generation’s historical moment. The future of the union depends on what we do now.”

The meetings adopted an action plan that includes picketing at Detroit’s high-profile Auto Show on January 8 and at Delphi’s headquarters in Troy, Michigan on January 22.

The rank-and-file meetings are the largest the ranks have seen in years. At the Bay City, Michigan meeting December 4, auto workers agreed that they were larger than any union meeting they’d ever been to.

The work-to-rule campaign is already under way. In Flint, one Delphi worker reported that “most in our department and the department that supplies us are doing it.” Another worker said that skilled trades and production workers are working to rule together; production workers report small problems, and skilled workers take their time in making the repair.

A GM worker in Flint advised workers to “think of work-to-rule not just as something you’re doing now but as a way of life for a unionist. When a younger person comes on my job, I teach them Union 101.”

Resisting overtime has been harder, for workers who fear future job and pay cuts. One Delphi worker said he’d been unsuccessful in encouraging his co-workers to refuse overtime just for a week.

With a new deadline to reach an agreement with Delphi — or plan a fight-back — the UAW International has been organizing town hall meetings and informational pickets, though there’s been little communication with the rank-and-filers who have been organizing their own meetings.

Lockport Local 686 held a rally November 30 that brought hundreds out, as did Kokomo, Indiana’s Local 292 on December 10. In Dayton, Ohio, city business leaders and state legislators lobbied Delphi to stay in operation in that manufacturing city.

In central Indiana, an estimated 1,000 workers and community members attended a rally in support of Delphi workers. Workers held signs that said, “Delphi cooks the books, workers get burned.”

In the two months since Delphi’s bankruptcy announcement, the UAW has oscillated between bleak predictions and tough fighting words.

UAW Vice-President Richard Shoemaker initially told Delphi workers: “The best we will probably be able to do is buy time for retirement and save some plants.” Later, Shoemaker, the UAW’s chief negotiator with Delphi, said that a strike was likely if Delphi did not improve its “ridiculous” offer. 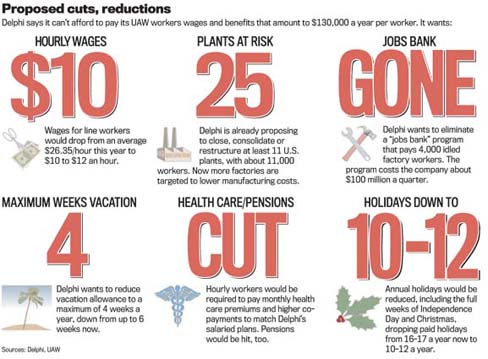 Delphi said that the delay of its bankruptcy proceeding to February gives the company time to negotiate a life-saving deal with GM, which created Delphi in 1991 by spinning off its own parts-making operations. GM recently volunteered to forego the planned 2006 price cuts it had previously demanded for Delphi parts.

The union claims that GM is still responsible for Delphi workers’ pensions, although it has been unable to produce a written guarantee to that effect. Rumors abound that GM will help Delphi — and pacify the UAW, which recently granted the company $1 billion per year worth of health care concessions — by offering buyouts to Delphi workers.

In 2003, the UAW signed an agreement allowing Delphi to cut new hires’ wages to $14 an hour, citing the need to make the company competitive with other parts makers (the parts sector is 80 percent non-union). All observers believe the International would not hesitate to accept wage cuts from the current $26 to $16-$17, having bravely fended off management’s opening demand for $9.

Tiffany Ten Eyck joined the staff of Labor Notes in June 2005 after working in Immokalee, Florida with the Student/Farmworker Alliance and the successful Taco Bell Boycott campaign. A former SEIU intern, anti-sweatshop activist, and anti-war agitator, she covers the Auto, Building Trades, immigrant workers, farmworkers, workers centers, and Jobs with Justice beats for Labor Notes. A version of this article originally appeared in the January issue of Labor Notes.