Washington – 2/22/06.  Today is Day Eight of our 34-day fast for peace at the U.S. Capitol, the Washington component of the Winter of Our Discontent campaign organized by Voices for Creative Nonviolence (www.vcnv.org).

The four of us in D.C., Maureen Foltz, Jeff Leys, Ed Kinane, and I are doing a liquids-only fast.  Maureen and Ed are drinking juice; Jeff and I are trying the water route.  So far, all of us are in good shape, not feeling any serious side effects.

Each day, between 11:30 AM and 2 PM, we take our banners and signs to the sidewalk bordering the Capitol Building, near the corner of Independence and First St.  We distribute flyers explaining what we’re doing and try to engage anyone we can in conversation.  Here is the reaction I’ve observed so far.

Lest you think our spirit is overwhelmed by apathy and nabobbery, let me reassure you it is not.  We are veteran activists, accustomed to keeping up our morale with conversation and camaraderie in the face of such responses.

No, the reason I’m describing what is — shall we say — a less than inspiring picture is this: if you are in that last category and have done something to make noise against this war, you must look into your heart, think, and determine what you can do that is more than you ever thought you could.

No matter what any of us has done, there is something more that we can do.  If we believe this war is a criminal abomination, an ongoing atrocity in which we are each complicit, we simply must do more.  For if this period of our 34-day fast — from the third anniversary of the February 15th demonstrations, the first time our world mobilized to stop a war before it began, to the March 20 anniversary of our government’s invasion of Iraq — doesn’t qualify as the time to pull out all the stops, what ever will?

We are fasting with the realization that at best we may get a few members of Congress to think briefly about what they’re doing; with no real hope we can actually get them to stop funding this war.

We are primarily fasting to let you, our friends, our colleagues, our comrades in the peace movement know that we are trying whatever we can think of to up the ante.  We are doing our very best as individuals to throw a mighty wrench into the gears of the war machine.  But our effort will be nothing more than a small, noble gesture if you don’t stop . . . and look into your heart . . . and think what it is you can do that is more than you ever thought you could.

If you do, I promise we will not get discouraged at the overwhelming number of people we see, kids and cameras in tow, as so many tourists ogling the whited sepulcher of democracy, oblivious that people are hard at work in that building, making decisions, spending somebody’s money, and killing people.

I promise we will not be deterred by the nabobs who swear at us almost under their breath, or the ones who laugh, or the ones who pull their kids protectively toward them.  That we know comes with the job.  That we can stand.  What is not tolerable is to think that the blessed, good souls in our nation, of whom I’m convinced there are a few millions, will think once more about this war and say, “Well, I did wear a button . . . I did write my letters . . . I did make some phone calls . . . I did march . . . I’ve even been arrested already.  What more can I do?”

Bless you for those truly wonderful efforts.  I am proud to consider myself your comrade in peacemaking.  But there are lives in the balance, literally.  We must do more — each one of us — and we can.  If only we think with our hearts and understand that now is the time. 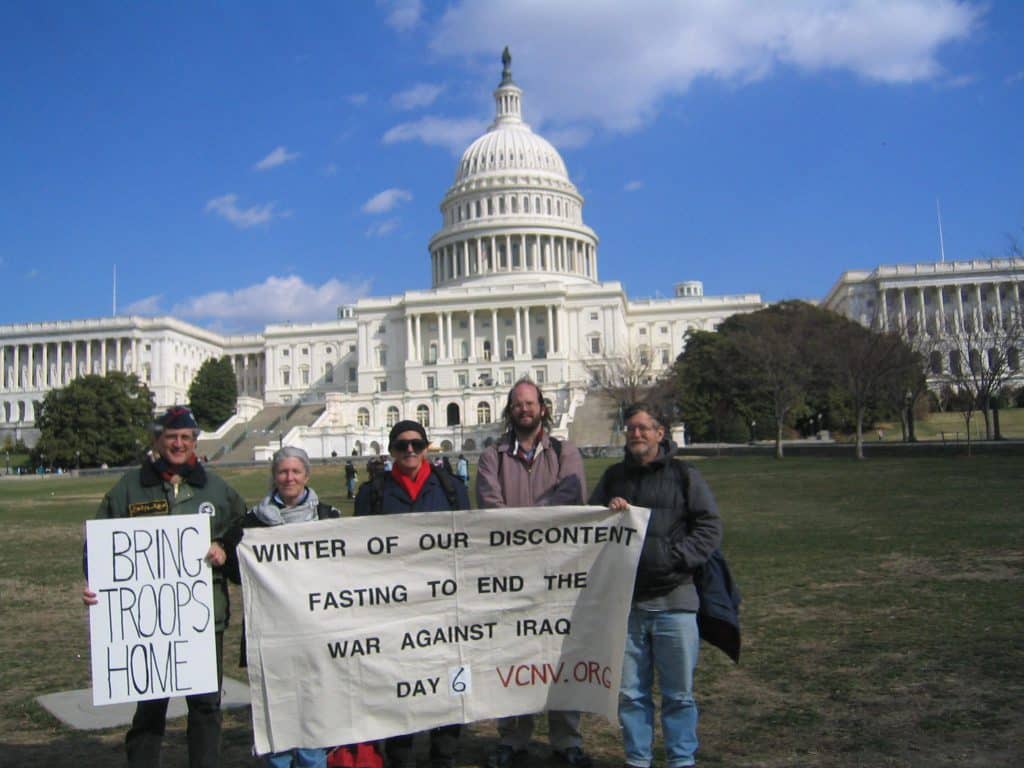 Participants in the Winter of Our Discontent protest in Washington include (from left) Mike Ferner, Maureen Foltz, Bernie Meyer, Jeff Leys and Ed Kinane.  Meyer finished his one-week fast the following day, and the others are continuing for the entire 34-days.

Mike Ferner traveled to Iraq with “Voices” just prior to the U.S. invasion and again a year later.  His book Inside the Red Zone: A Veteran for Peace Reports from Iraq (Praeger) is due out in August.