Few things are more frustrating than the doxa to which a hybrid and multifarious object such as “Islam” is all too readily reduced by formulaic provocation and paranoiac reaction.  The current “cartoon war” between “militant” Muslims and “militant” liberals in the “West” is a case in point.  Once again, people are led to view themselves and others in binary terms.  On one hand, to many peoples in the non-Muslim world, “Islam” represents an antagonistic force which threatens to compromise the rational universalism and secular humanism of Western Enlightenment.  For Muslims, on the other hand, the “West” in general and the United States in particular embody an exceptionally destructive form of savage, heavily armed nihilism.  The production of both categories, far from undergoing a process of critical examination, has been given over to a machine of escalating ideological incitement, which “al-Qaedaizes” Islam and “infidelizes” the West, withering the will to understand others.

Why is it, one may ask, that this parody of what “Islam” and the “West” represent, involving as it does a perennial cycle of reductions and counter-reductions, is so readily accepted?  Why is there such a mutual desire and passion to conquer, liberate, and possess the other — a rather incestuous dialectic between two societies that have institutionalized the Abrahamic prophecies, albeit in different ways.  As if the “West” and “Islam” needed to be constantly produced and reified.  As if it were essential to know the other’s “difference” from us.  As if it were obligatory to decide between “us” and “them.”  Those who are involved in the current clash of reductionisms would have done well to remember the parable of Babel: the transparency of our world was destroyed once and for all.  Instead, alas, hubris is the norm, with Danish, French, German, and Norwegian  journalists claiming to represent the secular present of “Western liberalism” and neo-fundamentalists in the Islamic world claiming to defend the sacrosanct essence of “Islam.” 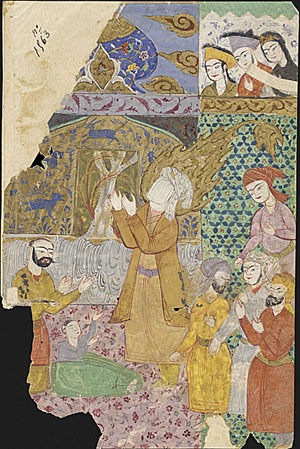 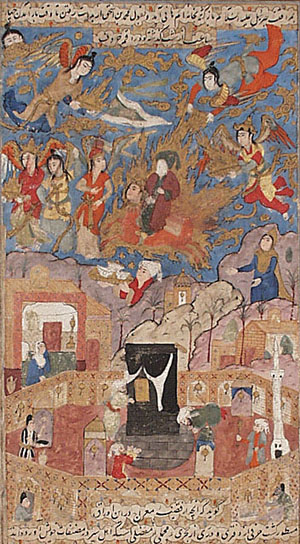 “The Mi’raj (Night Journey of the Prophet) with the Ka’ba in Mecca Below” (Page from an unidentified manuscript), Early 17th Century, Turkey

Far from being objects of unbiased and disinterested investigation, both the worldviews of “Islam” and the “West” are constituted as such solely because a whole set of often biased presuppositions about their essences are sold as ahistorical truths by those strata of society who claim to know better — the organic intellectuals of the dominant group in Antonio Gramsci’s terminology.  “Images of the prophet Mohammad are forbidden in Islam,” it is claimed symptomatically in Die Zeit of Germany, the Daily Telegraph in Britain, and a range of other newspapers in total ignorance of sixteenth-century Persian art and the Islamic pop-culture in contemporary Iran.  The “West,” in turn, is too often portrayed as the source of all evil in the Muslim world, as if corruption, authoritarianism, and human rights violations were imported phenomena.  Thus, we witness sympathizers of the al-Ghuraba (formerly al-Muhajroun) chanting “Britain, you will pay, 7/7 on its way” in the streets of London and Martin Henriksen, a spokesman of the Danish Popular Party, describing Islam as a “terrorist movement” and taking pride in the fact that “criticizing Islam is the official policy of [his] party.”

It was Harvard Professor Samuel P. Huntington, of course, who popularized the “clash of civilisations” thesis (following Princeton Emeritus Professor Bernard Lewis).  According to his thesis, conflict along the civilizational fault line between “Islam” and the “West” epitomizes the emerging “West versus the Rest” dichotomy — possibly the purest expression of tribal scholarship in the last several decades.  Is there any difference between Huntington’s thesis and the dar al-Islam (house of Islam) versus dar al-harb (house of war, forces of evil) dichotomy employed by some neo-fundamentalist scholars in Muslim societies?  Both dichotomies, “Islam versus infidels” and “the West versus the Rest,” are intended to enforce categories and draw strict boundaries between supposedly incompatible worldviews.  They form a “Janus-faced” intersubjective relationship: the two faces of a body of absolutist thought looking away from each other by necessity of their immanent constitution.  The two faces need each other because the “other” is what determines the self.  In other words, the perception of an inimical out-group is integral to the invention of an imagined community of an in-group — we are made to believe what we are because we are made to believe what we are not.

Do the alternatives have to be narrowed down either to arousing neo-fundamentalist libido or to tolerating a kind of neo-imperial “gang rape” of Islamicate civilisation?  I think it is far more immediately useful to admit that there is a conflict of political and religious cultures between the extreme fringes of Muslim societies and of the wider non-Islamic world, rather than a conflict between “Islam” and the “West” per se.  For that reason, we must take radical rhetoric and militaristic policies from both sides of the cognitive divide seriously, resolutely opposing them wherever they intend to set up another battlefield (Iran at this moment).  It remains the task of the rational majority to draw the public away from the ritual confirmation of sclerotic and monolithic ideas and make use of the neglected powers of dialogue and empathy.

Arshin Adib-Moghaddam, was educated at Hamburg, American, and Cambridge Universities.  He has published globally on critical issues of international affairs and his articles have been translated into many languages.  In October 2005, he was elected to the Jarvis Doctorow Junior Research Fellowship in International Relations and Peace Studies in West Asia at St Edmund Hall and the Department of Politics and International Relations, University of Oxford.  He is the author of The International Politics of the Persian Gulf: A Cultural Genealogy, published by Routledge in early 2006.  The recipient of many academic awards, including an Honorary Fellowship by the Cambridge European Society, Adib-Moghaddam spent the past year in Iran lecturing and co-directing a project to further peace research in the country.  He is currently working on his second monograph provisionally entitled The Muslim Presence in International Society: A Critique of the Clash of Civilisations.