The opening of the 39th Parliament of Canada on 3 April 2006 quickly revealed what should now be plain to all.  Under the Conservative Party leadership of Prime Minister Stephen Harper, Canadians are faced with a government with an unambiguous right-wing agenda.  The outlines of the “Harperism” project can readily be discerned: there is a clear effort to unite all reactionary and conservative forces into a coherent governing force, most notably to bring into the fold right-wing nationalists in Quebec; deeper integration with the U.S. will be pursued, initially expanding Canada’s imperialist role in military operations in Afghanistan as a component of the war strategy of the American empire, and following this up with trade and security policies to form “Fortress North America”; neoliberalism will be pushed further into social policy with greater market provision in such areas as healthcare and daycare and in the remaking fiscal federalism; and there will be a discursive emphasis on traditional Canadian “values” as a bridge to social conservatism, religious fundamentalists of all faiths. and a “law and order” platform.  This is far from the neoliberalism-lite of the Chretien government by which Canada differentiated itself from the hard right developments in the U.S.

Set against a forceful and an already staggeringly arrogant Conservative Government, the Opposition benches in the House of Commons look inept and desultory.  The Liberals under Martin had already moved in many of the same directions as Harper and can easily be rebuffed for attacking their own policies.  The Bloc Quebecois are tip-toeing around issues as conservative nationalists are either drifting from the sovereignty project or over to the Conservatives (much of the BQ farcically going over the top to state their support to Canadian troops).   And the ever-practical Jack Layton and the New Democratic Party (NDP) seem mainly concerned with trying to pry a compromise here and there out of the government to demonstrate, more to themselves than anyone else, that their “third way” is working.  It cannot be avoided, but still needs saying, for many socialists in Canada are still living with the clichés and within the fractured organizations and politics of generations ago: the Left is enduring a major defeat of its ideas and organizations.

The Speech from the Throne (the very name a noxious reminder of Canada’s backward democracy) is meant formally to transform an election manifesto into a legislative agenda.  Throne Speeches ring of platitudes and obscure more controversial initiatives.  The Throne Speech opening Harper’s maiden legislative session was no different.

As for platitudes, Harper’s Throne Speech had ample: “clean up government, provide real support for working families and strengthen our federation as well as our role in the world.” And, of course, the U.S. is “our best friend and largest trading partner.”  The so-called immediate “first five” priorities also found their place: accountability legislation, a cut in the sales tax, tougher criminal sentencing, cash for parents for childcare, and cuts in hospital waiting times.  These have become something of a mantra for government spokespersons.  Throne-Speech promises to accommodate the distinctiveness of Quebec, improve conditions for Aboriginal peoples, tackle democratic reform, and address environmental issues were ritualistically dusted off.  These will again come to naught.  The only unexpected announcement was government plans to offer, at long last, a formal apology for the racist Chinese immigration head tax.

While the “first five” priorities present a pragmatic side to the government, it is plain that a wider agenda will be pursued and occupy a great deal of attention.  This was evident, first off, in Harper’s inaugural foreign trip in March: a flashy visit to the Canadian troops newly deployed to southern Afghanistan.  This was a symbol of both the increased prominence of the Canadian military and even closer alignment of Canada with American imperialism.  In parallel with the U.S. example, opposition to the war in Canada is being characterized by Harper and the military brass as disloyalty to Canada.  The symbolism of the trip was also meant to convey what the military, the Conservatives, and ruling elites thought of Chretien’s refusal to send Canadian troops to Iraq as part of the U.S. “coalition of the willing.”

Second, Harper’s meeting with Presidents Bush and Fox in Mexico in April confirmed the Conservative agenda of pursuing deeper integration with the U.S., initially around border security and migration issues.  Canada, in its partnership with the U.S., will no longer present even modest recalcitrance to U.S. geo-political strategies.

Third, the extensive meetings between Harper and Quebec Premier Jean Charest through the winter, and also with several premiers from western Canada, indicated the priority of revamping federalism via a project of further decentralization of federal government powers, taxing capacities, and national programs.  Harper’s catchphrase for this process is “open federalism.”

Fourth, Harper has shown he will be defending Alberta oil interests without regard for socio-economic concerns.  He has already gone far out of his way to defend oil price increases; and he has indicated his intent to trim Canada’s Kyoto commitments, initially planning to axe some fifteen Environment Canada programs targeting greenhouse gas emissions.  Alberta’s oil industry, especially with the development of the oil sands, is of course one of Canada’s larger producers of emissions linked to climate change. 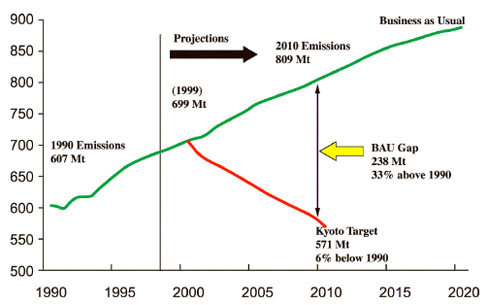 Finally, Harper has linked his plan to pay parents $1,200 a year for each preschool child to social conservatism.  The Government will sell the policy as offering families a “choice,” so as also to offer support for women who stay at home.  Social conservatives and religious groups are being enlisted on the government side in the coming battle over daycare policy.  The daycare fight will serve as a test drive for Harper on how far to go in further marketization of government, what allies can be marshalled, and on what terms the opposition parties can be incorporated into supporting government legislation.

Harperism, then, has a “first five” agenda and a larger strategy to re-shape the Canadian political landscape.  He will be ruthless in pursuing them.  Many of the old planks of democratic reform Harper plied in opposition, the remnants of the old Reform Party populism, will fall to the side.  This can already be seen in the first few months in office: Harper has been tossing any hint of democratization aside, in an unprecedented concentration of executive power.

Against party positions for an elected Senate and against floor-crossers, for example, Harper appointed Michael Fortier to the Senate and Cabinet, along with Liberal turncoat David Emerson.  In the accountability package introduced in April, he left to the side the access to information component.  In open disregard of his campaign focus on corporate lobbyists and the Liberal sponsorship scandal, he appointed a lobbyist for the arms industry as Minister of Defence: Gordon O’Connor.  Overturning his own personal effort in opposition to have Commons Committee chairs be elected by members, Harper appointed them all, including a clearly chauvinist MP to head up the Aboriginal Affairs Committee.  And Harper has concentrated power in the Prime Minister’s Office, where policy-making is being centered and where all Ministers must have their public statements vetted.  For example, foreign policy-making is being directed out of the PMO (in conjunction with the Department of Defence) where it is shrouded in secrecy, while the role of External Affairs is being limited, keeping both the dullard Minister Peter MacKay and less hawkish elements of Canadian foreign policy at bay.

This catalogue of the incipient authoritarian concentration of executive power and governance under Harper could easily be extended.  The project of “Harperism” is a quite conscious “passive revolution” directed against the Liberal establishment and many of the traditional ways of the Canadian state.  It is a particular right-wing style of governance and politics.  If it gains a firm hold on power over the next months, and if its populist appeal to traditional values begins to resonate, it will not be easily gotten rid of.

Harper is a determined and capable neoliberal with an agenda that is unusually clear in Canadian politics. That agenda has sparked calls from many quarters for a center-center alliance between the Liberals and the NDP.  Both parties are, in turn, shunning such calls and competing desperately to occupy the practical center.  The difficulty for the Left is that the practical center only offers a variation of the neoliberal order and slightly altered role for Canada in the American empire.  There is no point in being in a state of denial about this, as many still are in the union and the progressive movements, hoping to recapture some imagined progressive past.  They need to turn their back on the past and face the future.

Alternative campaigns will have to be built to open up new political spaces.  Two fissures have already appeared.  One is in the campaigns against market provision of healthcare and daycare in favor of universal public programs.  Over the last month, Alberta’s Premier Ralph Klein has had to retreat in part from his attempt to extend massively user-pay principles into healthcare, due to turmoil in his party and popular opposition in Alberta.  Many municipalities being prodded by public campaigns are increasingly turning away from private sector-led P3 funding of hospitals for their additional expense.  Similarly, the withdrawal by the Conservatives from daycare funding agreements announced by the previous government to advance their market-based approach is sparking a concerted campaign of opposition.  However, the NDP’s dissent to Harper’s daycare proposal, led by Toronto MP Olivia Chow, is mainly centered on a critique of the tax clawback that will occur as parents receive the daycare funds.  Daycare coalitions continue to campaign for the public provision of universal daycare provided parallel to the school system.  The differing political lines and strategies illustrate all too well the distance between the practical center that is the NDP and the vision of what is actually needed by the radical, yet ultimately more realistic, Left.  It is in these campaigns that the Left can regain a sense of possibility to remake the social order with principles of justice.

A second is the general public antipathy to Canada’s imperialist adventures in the Middle East, from the troop deployment in combat roles in Afghanistan under U.S. command to the sickeningly one-sided support of the Israeli occupation of Palestine and the immediate cutting of funding to newly elected Hamas government of the Palestinian Authority.  In both areas the Harper government is tying Canada even closer to being a mere rump to American positions on the region.  The more the Canadian public know about Canada’s policies in these two areas, the more they oppose them.  But here, again, widespread public opposition faces an all-party consensus in Parliament keeping these issues out of careful scrutiny and forceful debate.  The peace movement and the international solidarity with Palestine campaigns should, however, be able to gain momentum as the contradictions and limits of Western interventions into the Middle East increasingly become apparent and ever more morally and democratically objectionable.

These political spaces are where popular campaigns can do considerable damage to the project of Harperism.  They will depend, in part, upon a labor movement that rediscovers some capacity and will to struggle politically.  That would be a significant contribution of the coming battles.  It is also what is necessary to defeat neoliberalism, which turfing out the bloody-minded Stephen Harper alone will not do.