The 50th anniversary of President Eisenhower’s signing of the Interstate Highway Act on 29 June 1956 is a good time to watch a 1996 PBS documentary Taken for a Ride again.

Ten years ago, President Clinton visited my city during the 1996 presidential campaign.  Riding a “Presidential Special” from Columbus to Toledo on tracks that no longer carry passenger trains, Clinton crowed, “I’m goin’ to Chicago [for the Democratic Party convention] and I’m goin’ on a train!”

I wanted to ask him why the rest of us could no longer travel to our state capital by train and why we are the only industrialized nation on earth that refuses to subsidize its passenger rail system.  And I wanted to ask a question that makes me sick to my stomach to read 10 years later: “How many more billions of dollars and how many more lives will we pay for Mideast oil?”

Of course I never got to ask him those questions in person, but luckily, two fellow Ohioans, Dayton-area independent filmmakers Jim Klein and Martha Olson replied with their film: Taken for a Ride.

Their documentary tells the dramatic story of how America’s passenger trains and streetcars were systematically and deliberately killed by what we now call the “highway lobby.”  What makes their film so important is that it names names.

Klein and Olson weave General Motors promotional films, Congressional archives, interviews with citizen activists, and Department of Justice memos into a compelling pattern of events that make it clear: we didn’t get into the traffic jam we’re in today by accident.

For example, Ride explains, the oft-scorned highway lobby was not born of fuzzy environmentalist folklore.  The “most powerful pressure group in Washington” began in June, 1932, when GM President, Alfred P. Sloan, created the National Highway Users Conference, inviting oil and rubber firms to help GM bankroll a propaganda and lobbying effort that continues to this day.

Sloan, unhappy with a transportation system in which the majority of people rode streetcars and trains, not automobiles, bought out Omnibus Corp., the nation’s largest bus operating company, and Yellow Coach, the largest bus manufacturer.  With these, he began a campaign to “modernize” New York City’s railways with buses.

With New York as an example, GM formed National City Lines in 1936 and the assault on mass transit across America began with a vengeance.

Within ten years, NCL controlled transit systems in over 80 cities.  GM denied any control of NCL, but the bus line’s Director of Operations came from Yellow Coach, and board members came from Greyhound, a company founded by GM.  Later, Standard Oil of California, Mack Truck, Phillips Petroleum, and Firestone joined GM’s support of NCL.

If you’ve inched through traffic on a city bus or followed one for any distance, you know why people abandoned NCL’s buses for cars whenever they could . . . to the subsequent benefit to GM, Firestone, and Standard Oil.

Ride is most compelling when it documents how the U.S. Justice Department prosecuted NCL, General Motors, and other companies for combining to destroy America’s transit systems. 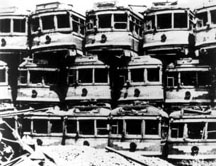 Brad Snell, an auto industry historian who spent 16 years researching GM, said that key lawyers involved with the case told him “there was not a scintilla of doubt that these defendants, General Motors and the others, had set out to destroy the streetcar system.”

For eliminating a system “worth $300 billion” today, Snell laments, the corporations were eventually found guilty (of conspiracy “to monopolize the sale of supplies used by the local transportation companies controlled by the City Lines defendants”) and each fined $5,000.  Key individuals, such as the Treasurer of GM, were fined one dollar.

The post-war boom in housing, suburbs, and freeways is a familiar story.  Not so familiar is the highway lobby’s high-level efforts to determine our transportation future.

In 1953, President Eisenhower appointed then-GM President Charles Wilson as his Secretary of Defense, who pushed relentlessly for a system of interstate highways.  Francis DuPont, whose family owned the largest share of GM stock, was appointed chief administrator of federal highways.

Funding for this largest of all U.S. public works programs came from the Highway Trust Fund’s tax on gasoline, to be used only for highways.  Its formula assured that more highways meant more driving, more money from the gasoline tax, and more highways.

Helping to keep the driving spirit alive, Dow Chemical, producer of asphalt, entered the PR campaign with a film featuring a staged testimonial from a grade school teacher standing up to her anti-highway neighbors with quiet indignation.  “Can’t you see this highway means a whole new way of life for the children?”

Citizens might agree that highways meant a whole new way of life, but not necessarily for the better.  The wrecking ball cleared whole neighborhoods for the interstate highways and public protest grew accordingly.  One Washington, D.C. activist recalls, “this was a brutal period in our history; a very brutal period.”

The documentary concludes with a peek into the future, interviewing corporate sponsors of the Intelligent Vehicle Highway System, a computer-controlled vision of travel which currently receives the lion’s share of federal transportation research funding.

Taken for a Ride is more timely today than when it was made a decade ago.  Watch it.