The depth and breadth of bipartisan commitment to the US empire among America’s political elite is best seen in the House vote on HR 282, the “Iran Freedom Support Act,” essentially a bill to “make U.S. sanctions against Iran under ILSA permanent unless there is a change of government in Iran”1:

The Yeas were so overwhelming that it’s easier to just count the Nays, which were cast only by the following representatives:

Dennis Kucinich, often unfairly ridiculed (by many liberals and leftists as well as by conservatives) as a wooly-headed lover of woodsy creatures, came up with a brilliant tactic of hammering on a division among regime change supporters over what to do with MEK: some want to delist MEK from the State Department’s list of terrorist organizations and use it against Iran; but others are weary of it.  The tactic doesn’t work in the House, but it should be exploited for what it’s worth to prod liberals and leftists who have yet to make up their mind about Iran.

The Senate version of the bill, S. 333, is sponsored by Rick Santorum2 and cosponsored by 61:

There hasn’t been much action on this in the Senate yet, though:

Read twice and referred to the Committee on Foreign Relations.

As Kucinich correctly noted, passing this bill now sends an unmistakable message to Moscow and Beijing that Washington is committed to regime change in Iran no matter what and will make it even more difficult than now to manufacture multinational ruling-class consensus on Iran, and that’s why it’s stuck in the Committee, for the time being.  We’ll see what will happen after mid-August, when Tehran replies to Washington.

In any event, the question of Iran demonstrates that we can’t change national policy on the most important questions that have the gravest implications for world economy — Iran is far more significant to world economy than Iraq is3 — through electoral politics in the belly of the beast.  Neither rank-and-file Democrats nor Greens nor others have confronted this fact head on, let alone come up with a strategy based upon it.

In 2004, too many activists on the left put all their eggs in their respective electoral baskets and dropped them: Ralph Nader and the Green Party split, in a very acrimonious divorce, dooming any potential for an anti-war third-party challenge, and anti-war Democrats, frightened by the very thought of another term for George W. Bush, backed the candidate whose policy they did not support.  Protests against the Iraq War practically disappeared — even while news of the Abu Ghraib torture exploded in the media and a joint Shiite-Sunni uprising presented a window of opportunity — and they have yet to return.

Let’s face the consequence of our deeds: our desertion from the streets helped destroy Iraq, which wasn’t free under Saddam Hussein but was at least modern.  Iraq is now on the way to becoming an Afghanistan.

In the latest indication of the crushing hardships weighing on the lives of Iraqis, increasing portions of the middle class seem to be doing everything they can to leave the country.  In the last 10 months, the state has issued new passports to 1.85 million Iraqis, 7 percent of the population and a quarter of the country’s estimated middle class.

The school system offers another clue: Since 2004, the Ministry of Education has issued 39,554 letters permitting parents to take their children’s academic records abroad.  The number of such letters issued in 2005 was double that in 2004, according to the director of the ministry’s examination department.  Iraqi officials and international organizations put the number of Iraqis in Jordan at close to a million.  Syrian cities also have growing Iraqi populations.4

According to the U.S. Committee for Refugees and Immigrants, Iraqis fleeing their occupied country last year reversed the four-year decline of refugees from 2001 through 2004.5

A British documentary titled Iraq’s Missing Billions, released this year, brings home the death of a nation.  At its end, a baby dies . . . before our eyes:

ALI COMMT: The problem is the doctors caring for Zehara have virtually nothing to “make the best of.”  They have no ventilators, no adrenaline, not even a cheap but essential medicine like vitamin K.  Even the cannula being used on Zehara had to be bought on the black market by her father.  And now he’s gone into town again — this time looking for vitamin K.  Only the grandmother is here.  Then Zehara starts to deteriorate — she is gasping for breath.  Her father has still not returned.  But it is too late.

THE DOCTOR: Where is the mother of this child?  This child has passed away.

ALI VO: And then the father comes back .

FATHER: I just went to get this for her, they told me to bring it.  It’s vitamin K as they don’t have it here

ALI VO: If this hospital had had the correct equipment and the right drugs, Zehara should have survived.

ALI VO: The next day, Abbas, Zehara’s brother, died too.  This is not the new Iraq we were promised when the coalition invaded our country.6

I don’t believe in God, so I don’t think there will be divine retribution.  But I do believe in cause and effect — we’ll all pay earthly prices for this.  How high the prices will be, I don’t know.

We can’t let this happen to Iran.  But what is to be done?

2  Yes, that same Santorum, who put gay sex on the same footing as “man on child,” “man on dog,” in his opposition to gay marriage.  Last year, such GLBT activists as Peter Tatchell helped promulgate a sensational story about the purported Iranian execution of “gay teens” (who were actually convicted of rape, not of homosexual sex, and may not have been even gay at all, given that straight men who despise gay men can rape boys as well) which originated in MEK‘s propaganda machine.  This year, Tatchell is tirelessly recycling the same story, as part of his campaign for regime change in Iran.  Politics makes strange bedfellows.

3  What will happen if Washington manages to forge multinational ruling-class consensus and the United Nations Security Council imposes sanctions on Iran?  Joseph Stiglitz explains in Spiegel‘s interview with him: “It would mean an enormous disruption, as oil prices might rise over $100.  You can increase the price from $25 to $40, and people can absorb it.  If the price rises above $60, they become unhappy.  They start to adjust, they move to smaller cars, drive a little bit less.  At $100 or $120, there are major changes in lifestyle.  The sales of cars will plummet.  Poor people will be facing real problems of heat versus food” (“Interview with Nobel Laureate Joseph Stiglitz: ‘The War Is Bad for the Economy,'” Spiegel, 5 April 2006). 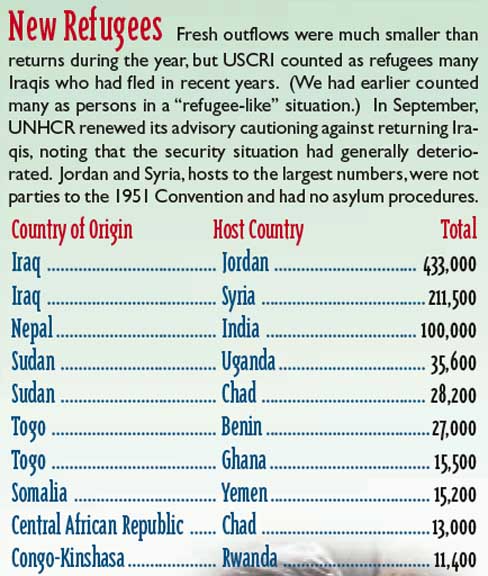 See “Monthly Incidents of Sectarian Violence” in the chart below (in the right column, the second row from the top), and you’ll notice a more than tenfold increase in sectarian violence between May 2005 and May 2006.

The occupier is responsible for this increase in sectarian violence, through its own use of death squads as well as its making Iraq vulnerable to the infiltration of international jihadists.  See Zaineb Alani, “Iraq: Everybody Out!” (MRZine, 18 June 2006).