The legend in my family has it that my Grandpa Kelley was a rank-and-file organizer of some importance during the CIO upsurge of 1936-37, at his General Motors plant in La Grange, Illinois.  He died before I went into the Army in 1969, so I never really got much of a chance to talk to him as a fellow worker and rank-and-file union person.

Our conversations were usually about me becoming a responsible adult, doing well in school, things like that.  Oftentimes his fighting Irish spirit came out when we were together, like the time he leaned toward me with a twinkle in his eye and said, “You know, Brian, I like trouble, I really do.”  Or another time when we were riding together in the back seat of my father’s car and I had just finished explaining, with all the arrogance of a 20-year-old, the need for a socialist revolution.  “Brian,” Grandpa said with that same twinkle, “I can see that you and I shoot our marbles just a little bit different.”

John Kelley was a small businessman when the Great Depression hit Chicago in the early Thirties.  His moving business went under fairly quickly, when being thrown out on the street became a common way for people to leave their homes in his Irish working-class neighborhood.  Not much use for his splendid truck or his careful crew under those circumstances.  With a wife and three young children to support, there wasn’t much question of starting a new business in those tough economic times, so John set about finding a steady job.

Grandpa was a skilled carpenter and an articulate man with a wry, Irish sense of humor.  Those qualities must have served him well when he made the two-hour bus and trolley ride out to the giant Electromotive plant in La Grange to apply for a job.  Can you imagine the line of job seekers at the gate that day?  Maybe one of the foremen recognized John from the neighborhood, or maybe he cracked a joke at just the right time.  We’ll probably never know exactly what did it, but he was one of the lucky ones that day and was hired to work as a carpenter/mold maker.

Electromotive, a division of General Motors, had built an enormous facility in La Grange for the manufacture of diesel locomotives, the power cars for trains.

Imagine a brick factory an eighth of a mile wide and a mile long.  Fifteen thousand workers under the same 30-ft ceiling producing, literally, 95% of the engines needed to drive American capitalism.  The feeling of confidence those workers had in the collective role they played must have been such an elixir of solidarity!  I bet no one in that plant spent much time doubting his importance in the scheme of production.  Huge, complicated machines that only skilled and experienced workers could operate stretched as far as the eye could see from most work stations.  The thought that “no way they could run this place without us” must have passed through my grandpa’s mind on more than one occasion as he built the wooden models that would be used to make the steel stamp molds, which in turn would be used to create the parts necessary to assemble a locomotive.

Back to the family legend.  My grandpa must have come into contact with CIO (United Auto Workers) organizers, possibly in his neighborhood back in Chicago.  At some point in 1936, probably when a number of issues had energized John and his co-workers, he led his group of 12 men in the pattern shop out of the AFL and into the CIO.

The courageous action of these 12 men, led by my Grandpa Kelley, resulted in the formation of UAW Local 719.  This new local quickly organized all the workers at Electromotive into a closed shop that included everybody, skilled and unskilled, in the same union.  Local 719 signed its first contract with General Motors in 1937.

This story has been a source of inspiration to me throughout my adult life.  I’ve been involved in one form or another of progressive and socialist organizing for close to 40 years now.  Two years ago I followed in my grandpa’s footsteps and organized the technicians at the hospital where I’ve worked for the last 12 years.  We won our union election 80-24, and we’re now in the second year of our first contract.  Please wish us good luck!

Before attending the 2001 Labor Notes conference, my wife and I stopped off in Chicago and tracked down my grandpa’s old union, UAW Local 719.  We received a lot of help from aunts and cousins, and a dear old friend, Joe Berry, who is a Labor History teacher at University of Illinois, Chicago.

We found the new plant in La Grange and went in the main entrance, where we saw bricks from the old building offered for sale as souvenirs.  I couldn’t guess what my grandpa would have thought about that!  We found the old union hall and discovered it had been abandoned.  It had been opened in 1953 and closed in fall of 2000.  What was going on?  Had I missed my chance?

We asked around the neighborhood and, with some help from Joe, located the new offices of a now considerably smaller Local 719, representing the 1,500 workers at the rebuilt Electromotive plant in La Grange, Illinois.  At the 719 offices we met Louise Bell, the then president of the local.  Louise was very glad to meet us and, after hearing my story, graciously opened the archives of the local to us so we could see if there was any record to be found of my grandpa.

The old copies of the newspaper that had been published as a monthly in the 40s, 50s, and 60s offered us a window into a different time of unionism in America.  Everything from a column for suggested recipes to lively commentary on the grand issues of the day.  Not much sympathy for Stalin, but steadfast support of good union members who happened to be communists.  Every issue had a photo of a young, pretty girl inside: a babe of the month.  We laughed with Louise about that.  “Probably not something we’d put out now,” the tall and attractive African American union president told us.

One of the archive boxes contained photos from the early days of the local, and Louise encouraged us to look through the old pictures, “because nobody around here now has any idea who’s in them.  Maybe you’ll see your grandpa.” 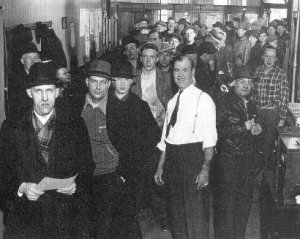 Bingo!  In a photo of energized men gathered for what appeared to be a union balloting session, there was John Kelley.  When we showed the picture of my grandpa with his union brothers (no sisters, yet) to Louise, she was delighted at our discovery and went around the offices showing the picture to the union staff people who were there at the time.  From Grandpa’s age in the photo, we’re guessing it was taken at the vote to conclude the big GM strike in 1948.  My Aunt Mary informs me that, as a result of that three-month strike, the family was forced to move out of their own apartment and into my great grandma’s home.  Mary was 16 at the time and remembers it as a humiliating and scary time for her.  Serious business.

Mary also told me that my grandpa stuck with the rank and file until he retired in 1953.  He must have been something of a gadfly at union meetings, because my grandma would always tell him to try and not stick out so much by speaking on every issue that would come up.

I’m so proud to be John Kelley’s grandson.  I only hope that, when I step away from things, I’ll be able to say that I’ve contributed something to the union movement, just like Grandpa.

Brian King is a steward in UFCW Local 1001 in Seattle.  This article was originally published in Labor Notes (June 2002).