Pauline Kael, the American film critic, once said that Gillo Pontecorvo was the most dangerous kind of Marxist: a Marxist poet.  When the Italian film director died last week at the age of 86, he had not made a full-length feature in over twenty-five years.  Yet the potency of Pontecorvo’s firebrand poetry can still be felt today.  Despite completing only a small handful films during his fifty-year career, his unique voice and uncompromising politics have made a lasting impression that resonates throughout the world of cinema.

It was The Battle of Algiers (La Bataille D’Alger) that established Pontecorvo as one of the most controversial filmmakers of his time and as an international icon.  Any director or writer who has ventured into the world of social or political filmmaking, from Mira Nair to Oliver Stone, will cite Algiers as an influence, and its mark can be felt on movies as diverse as Traffic and Do the Right Thing.

Pontecorvo was born in 1919 to middle-class Jewish parents in an Italy soon to be in the hands of Mussolini’s fascism.  He described himself in his early years as being fairly “apolitical.”  But with growing anti-semitism in Italy, Pontecorvo’s path was to inevitably cross with the growing anti-fascism among ordinary Europeans.  During a trip to France, where he rubbed elbows with the likes of Picasso and Jean-Paul Sartre, as well as some who had fought against Franco in the Spanish Civil War, his radicalization crystallized.  Upon returning to Italy in the 1940s, he joined the underground anti-fascist movement and became the head of the clandestine Communist youth organization.

With the fall of fascism, Pontecorvo set out to become a photojournalist, but after seeing Roberto Rossellini’s masterpiece Paisan, about the fascist persecution of Italian partisans, he decided that his passion lay in filmmaking.  His first films were documentaries and short films, and his first full length, La Grande Strada Azzurra (The Wide Blue Road) would garner much praise and a prize at the Karlovy Vary Festival.  But it was 1959’s Kapo, a film about a woman’s escape attempt from a Nazi concentration camp, in which Pontecorvo would begin to take up explicitly political issues.  The director had left the Communist Party in 1956 in protest against the Soviet invasion of Hungary, but as his films show, he would always remain dedicated to social change.  “I’m still a man of the left,” he would say in a 1992 interview, “searching . . . for a way to change the terrible things in our world.”

This would become apparent in his next film.  The Battle of Algiers, the story of the Algerian people’s struggle for liberation from French domination, is regarded as Pontecorvo’s masterpiece and cemented his place as the foremost political filmmaker of his generation.  It employed revolutionary techniques to deliver an airtight case against French colonialism in the same vein as Frantz Fanon.  First, the film was shot in the style of a newsreel: black and white, grainy.  Second, instead of following one dominant protagonist, he sought to make the Algerian people as a whole the protagonist, a “choral personage” which would owe much to Rosselini as well as Sergei Eisenstein.  Here is where we see Pontecorvo at his best: his masterfully realistic depiction of crowds, and his careful selection of non-actors in the main roles.  Pontecorvo was so loyal to realism that he even cast Saadi Yacef, a leader of the Algerian liberation movement, in the role of El-Hadi Jaffar, the rebel leader in the Algiers Casbah.  The result is an immediacy unparalleled by most films. 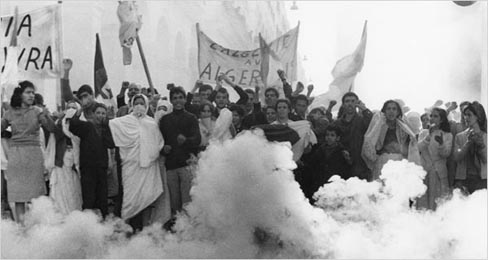 Pontecorvo also wanted to humanize — rather than dogmatically villainize — the French occupiers.  “I believe, and above all (scriptwriter) Franco Solinas believed, that it is important to get inside the minds of both sides.  The paratroopers, for instance; why should we make them out to be monsters, or like the SS?  The condemnation of colonialism, which was our objective, is better served by putting the blame elsewhere: on the error and intransigence of colonialism.”  Hence, the French Colonel Mathieu (played by Jean Martin, the only professional actor in the cast) is charismatic, sophisticated, and makes clear that he is simply here to do a job, the job that becomes more and more chilling as we see him and his troops brutally torture Algerians to gain intelligence on the resistance.

These perfectly created what Pontecorvo called a “dictatorship of truth.”  By the end of the film, there is little question that the Algerians are justified in kicking out the French, using whatever means necessary to that end.  The film garnered both controversy and praise upon its release; despite being banned in France for four years, it won the Golden Lion at the 1966 Venice Film Festival, as well as many other awards and nominations.  It was clearly a polarizing movie: Western conservatives attempted to write it off as a piece of Communist propaganda, while radical groups from the IRA to the Black Panthers used it as a source of learning and inspiration.

It is appropriate that Algiers would find a new generation of admirers and enthusiasts.  Today, it is frequently screened by left-wing and anti-war groups all over the world in order to better understand the consequences arrogant imperialism.  Ironically, the Pentagon, too, held a screening of the film in 2003 to better “prepare” for what lay ahead in Iraq.  Looking at the country today, though, we may safely say that they didn’t learn the right lesson: namely that occupations ultimately fail.

Pontecorvo made two more full-length features: 1969’s Queimada! (Burn!) and 1979’s Ogro (Ogre).  Both also took up the question of violence against an occupying force.  But from Ogro‘s release until his death last week, the master of political filmmaking was an absence in the world of cinema.  A relentless perfectionist, he often scrapped projects on which studios wanted him to compromise.  In the end, he would rather the film not get made at all than be watered down by a film company trying to skirt political controversy.  A quick glance at some of his scuttled projects reveals what we missed: from a chronicling of the first Palestinian Intifada, to a biography of Salvadoran Archbishop and human rights activist Oscar Romero.

Perhaps the real tragedy of Pontecorvo’s untimely death, as well as his relative absence from the big screen in recent decades, is that the nature of the world we live in today would have been best illuminated by his perspective.  In a world where the arm of imperialism is constantly attempting to stretch itself to new territories, a lens of clarity like Pontecorvo’s is sorely needed in the realm of film.  Edward Said made Pontecorvo’s contribution very clear: “In the end I think his films leave us with a lot of questions; questions like can empires be defeated?  Is there a possibility for relationships between western societies and non-western societies that are not based on oppression and discrimination?” At a time when those very questions are more urgent than ever, few filmmakers force us to confront them, and even fewer can force us so skillfully.  Compared to Algiers, most “issue” movies today seem preachy or apologetic.  That is why Pontecorvo’s films remain so important.

Pontecorvo’s works like The Battle of Algiers have withstood the test of time for a reason: they continue to inspire and teach.  The flawless way in which his movies mix politics and art serves as a brilliant example for today’s directors.  Will a new generation of filmmakers take up the torch he has so gracefully passed to them?  If they do, that will be Pontecorvo’s biggest legacy.

Alexander Billet is a writer and activist living in Washington DC.  He is currently working on a book tentatively titled The Kids Are Shouting Loud: The Music and Politics of the Clash.  He can be reached at alexbillet@hotmail.com.