Most people know that Detroit, the once-vibrant automotive capital, has been in an economic tailspin for decades.  Legions of “post-industrial” analyses have properly assigned responsibility for it to profit-motivated factors in capitalist decision-making since the late 1950s.  The human cost of the tailspin is nearly beyond comprehension for those who are not directly affected by it, but some grassroots Detroiters who have lived through it are reacting in a form that could be called survival politics.

Detroit has lost nearly one million people since 1950 when it was the fifth largest U.S. city.  In the past half century, most auto and ancillary production was transferred to the Detroit suburbs, U.S. South, or other countries.  Other companies went out of business, absorbed each other, or automated their production.  The good wages and benefits, along with a strong union presence, made Detroit in its heyday a magnet to workers all over the U.S., indeed the world.  The families of new workers settled into segregated neighborhoods (Appalachian white, Black, Polish, Arab, Latin, etc.) whose homogeneity partly remained intact due to policies of the white ruling class and its controlling racist institutions.  This is a familiar story in nearly every U.S. industrial city.

Detroit today, now eleventh in size, is the poorest large city in the country and has the highest poverty rate.  While the official unemployment rate for the state of Michigan is 7.1 percent, Detroit’s rate is over 25 percent and the rate for its Black youth hovers around 70 percent.  This produces soaring rates in infant mortality, crime, and violence.  Thousands of households have had their water, gas, and electricity turned off because they cannot pay their bills.  A vast portion of the city is a wasteland of abandoned buildings and vacant space where thriving industrial and commercial infrastructure once existed.  Most occupied neighborhoods are clearly poverty stricken.  Ironically, Detroiters pay one of the highest real estate taxes in Michigan.  Like Delphi, and possibly General Motors, the city government is heading toward bankruptcy with a current annual budget shortfall of $105 million.  The city is laying off workers like mad, privatizing all possible remaining city services, and selling off or losing control of public assets like the zoo, museums, and one of the best water systems in the world that profitably supplies water to most of the metro population of some four million.  The public education system is tattered beyond description, students now walk out of schools to protest their decaying infrastructures, and privatized charter schools are the newest class-based fad.  Hospitals and clinics are closing.

Meanwhile, capital acquires abandoned land and useable buildings at rock-bottom prices and abundant tax abatements through legal shenanigans called Renaissance Zones or Neighborhood Enterprise Zones.  Capital is building a small Disney World of downtown-riverfront gambling casinos and sports stadiums (thus, last year’s Super Bowl), along with housing and amenities for the youthful affluent who are being enticed to the newly “cool” center-city experience.  It all is one of the most vulgar illustrations imaginable of class advantage and class segregation in which race is not the major factor it was in the past.  If you have money, you’re welcome.  According to a recent interviewee, those without money, regardless of color, are all “niggers.”

Detroit today is home for some 850,000 Blacks (about 90 percent of the population), making it probably the most segregated large city in the U.S.  Expectedly, this population elects Black people to public office to officiate over the contradictions of urban decay and increasingly rigid class stratification.  It’s not unlike other large cities where people of color have become the majority.  When once-socialist-leaning Coleman Young became the first Black mayor of Detroit in 1973, many Detroiters hoped the city’s massive downward slide might be slowed or even reversed.  At least, Blacks would finally get a piece of the pie.  Of course, whites and pretty well-off Blacks were abandoning the city in tandem with industry and commerce.  As with Mayor Young, subsequent Black mayors — Dennis Archer and today’s Kwame Kilpatrick (youngish “hip” son of congressional representative Carolyn Cheeks Kilpatrick) — fully cooperated with all levels of the power elite to bring what was left of Detroit into capital’s common cause.

Over the recent years, the Detroit City Council, elected at-large, also has reflected Detroit’s population, so that now eight of the nine councilors are Black, compared to several decades ago when all were white.  It is widely asserted by responsible observers (and given credibility in recent court cases) that the Detroit electoral system is hugely corrupt and strongly influenced by ruling capital.  This is not news to any observers of U.S. electoral politics, nor is it news to a dedicated body of genuinely grassroots Black activists in Detroit who thoroughly understand the system and see through the chicanery of Detroit’s faux democracy.  The November 2005 Detroit elections brought Kwame Kilpatrick back into the mayoralty and produced a relatively conservative city council, including Council President Kenneth Cockrel, Jr. (son of deceased Kenneth Cockrel, Sr. who was a stalwart with the League of Revolutionary Black Workers in the 60s and a one-term member of Detroit City Council before he left in frustration), Sheila Cockrel (widow of Kenneth Cockrel, Sr., stepmother of Kenneth Cockrel, Jr., from the Catholic Worker tradition, a 70s Detroit “radical” and the only remaining Anglo on Detroit’s city council), Monica Conyers (wife of congressman John Conyers), and singer Martha Reeves.

There is a small potent band of grassroots Detroiters named Call’em-Out, “dedicated to the mission of stamping out samboing and selling out of our community by elected officials.”  Inspired and assisted by vigorous and courageous veterans of Detroit working-class struggles such as Marian Kramer and Maureen Taylor of the Michigan Welfare Rights Organization, Call’em-Out formed a “Sambo Patrol,” demonstrating in front of the homes of six members of City Council who voted against considering a rational Water Affordability Program devised by local human rights advocates.  Designed to call attention to the 45,000 Detroit households whose water was turned off for nonpayment of bills, and to promote the idea that water is a human right, actions like it have great potential to catalyze the grassroots against the egregious policies of those who control things in Detroit.  Reportedly, ALL utilities are now being included in the Affordability Program, which can become a generalized struggle for survival, desperately needed by the majority of Detroit residents. 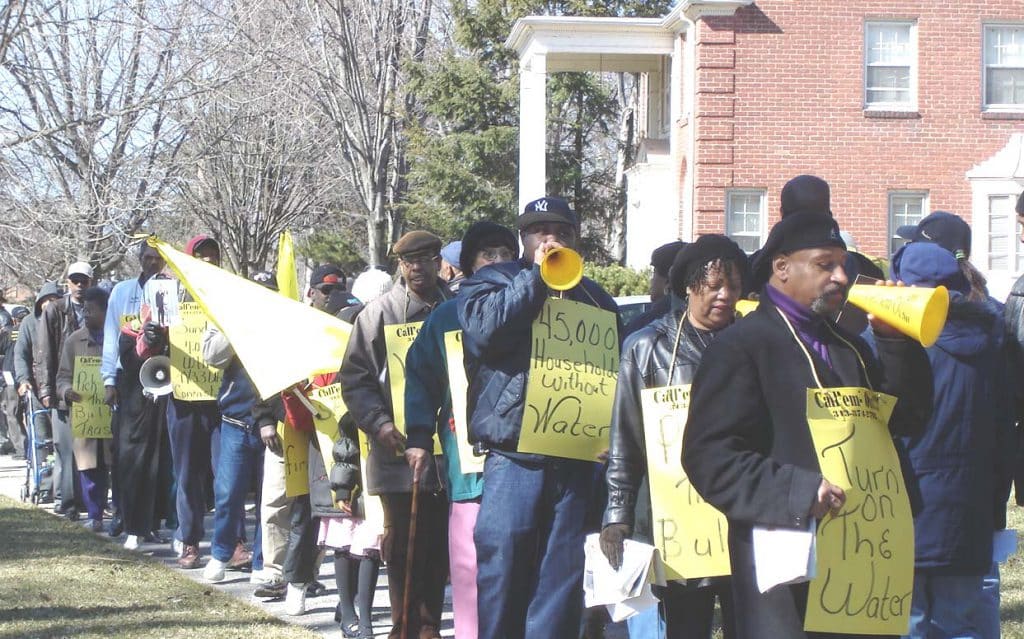 Detroit has had a steadfast and proud tradition of working-class left activism in the labor, civil rights, and other movements.  Along with a powerful union movement led by the UAW, Detroit spawned such groups as the League of Revolutionary Black Workers and the white left-radical People Against Racism.  The city was considered by some in the 60s to be the “revolutionary capital of America.”  But this is history.  Today Detroit is very different, with a near-impotent UAW, a nearly-total population of color who are aging and increasingly led by women, a state of relative joblessness, a rapidly declining quality of life, and no hope that capital and its cronies have any intent or ability to recreate the city.  Even suburbs near the city are deteriorating.

However, Detroit still has an activist grassroots core that swears by the axiom that new material conditions require revised tactics.  Activists of this grassroots core are in the process of theoretical and organizational development.  Their view is that the disappearance of the means of production from Detroit, along with the rapidly evolving electronic mode of production and the cynical aloofness of capital toward the working-class condition, has produced a new class in working (or nonworking) Detroit who must take leadership in the coming class battle.  Not a lumpen proletariat, this new class has been displaced by capital and left to wither.  Race is only a crucial subtext in this battle.  No longer can Detroit’s citizens rely on union strength, white liberalism, or “enlightened” capital — all pages from the past.  At the practical level, the core leadership emerging from this new class evinces confidence because of their personal characteristics: they are nice and moral people, they are strong and confident, they are wise and deeply experienced.  Though a Detroit grassroots core, they are a microcosm (in an extreme urban trauma) of innumerable cases throughout the United States, which I have great hopes will become agents of political struggle and change.

I plan in the future to report testimonies in these pages from Detroit leaders, since I believe that Detroit once again will be a beacon of struggle and a tribune of the working class.

Robert H. Mast has published Detroit Lives (Temple University Press, 1994) and (with Anne Mast) Autobiography of Protest in Hawaii (University of Hawaii Press, 1996), as well as various articles on labor, race, and community. A semi-retired sociologist, he is a member of UAW Local 1981 (National Writers Union), an officer in the Detroit Labor Party chapter, and an activist in Detroit.