The political doctrine of plausible deniability that was originally developed by the US government in the 1950s to mask CIA operations against real and perceived enemies is now being directed against the American public to conceal corporate schemes that are altering the economic infrastructure of the nation at large.

The case in point is the construction of the NAFTA supercorridors, massive North/South integrated transportation corridors designed to distribute cheap manufactured goods and immigrant Latin American labor throughout the country in order to avert economic recession in the US.  Supporters of the project have adopted a political strategy of denying that the plan exists until it presents itself as an accomplished and irreversible fact.

The North America’s SuperCorridor Coalition (NASCO, at www.nascocorridor.com/), a powerful lobby group based in Texas, is the public face of the promoters of the massive transportation plan and a primary disseminator of disinformation about it.  On their website, NASCO states unequivocally:

“There are no plans to build a new NAFTA Superhighway — it exists today as I-35.”

The collaboration between NASCO and the State of Texas is clearly demonstrated by the current link on the NASCO website to the Texas Department of Transportation (TxDOT at www.keeptexasmoving.org) which supplements the NASCO disinformation with a blatant official lie:

“Specific routes for the TTC have not been determined.”

(Note: The sections of NAFTA supercorridors located in Texas are called the Trans-Texas Corridors or TTC.)

Photos 1 and 2 show the current stage of construction on the I-35 Supercorridor in Texas.

Both photos were taken in the afternoon of November 22, 2006.  Photo 1 shows the motor vehicle traffic section of the I-35 supercorridor where it bisects the town of Webberville, Texas.  Photo 2 pictures the corridor several miles north where it passes near Lake Charles E. Long, just east of Austin.

Construction of the supercorridor in Texas began in remote areas and small towns where resistance was unorganized and the activity drew little attention.  In keeping with a low-profile strategy, neither of the two construction locations recorded in Photos 1 or 2 is identified in any manner whatsoever, a practice unheard of in the construction industry.

Map 1 pinpoints the location of these two construction sites on the I-35 NAFTA supercorridor route. 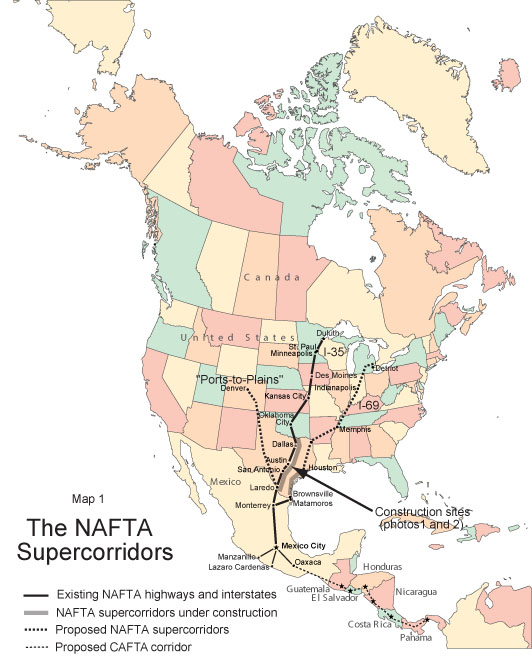 Map 1 makes it clear why the TTC is key to the development of the NAFTA supercorridor system — most of the freight and human traffic from Mexico and Central America bound for the heartland of the US must pass through Texas on the way north.

Map 1 also shows that construction is currently underway on I-69, the supercorridor that is designed to carry the traffic destined to the northeastern US states.  Despite the facts that the route of I-69 is clearly marked by TxDOT signs from Houston to the border and that traffic is currently being diverted around the construction of the corridor through the border city of Brownsville, George Blackwood, president of the board of  NASCO maintains publicly that work on I-69 is not slated to begin for 10 years (Heartland Labor Forum, August 31, 2006) .

The plan behind the proposed “Ports to Plains” corridor (see www.ports-to-plains.com) that would run from Laredo to Denver is to use cheap goods and labor from Mexico and Central America to develop the southern Great Plains of the US.

And the Pursuit of Profit

The reason for all the deception is not hard to fathom.  Maintaining profit margins, the number one priority of US capitalism, is becoming increasingly difficult in the face of declining aggregate real income in the nation.  The current solution to this historical problem of capitalist production is the mass importation of cheap goods manufactured in the maquiladoras of Mexico and the sweatshops of the Far Eastern Pacific Rim that are being imported through the ports of Mexico (see “The NAFTA Corridors: Offshoring U.S. Transportation Jobs to Mexico,” Monthly Review, February 2006, available at www.monthlyreview.org) and the mass exploitation of both documented and undocumented immigrant labor in the US.

The NAFTA supercorridors are essential to both of these current economic stopgaps, but their real function cannot be disclosed to the public at large because they are exorbitantly costly and wasteful measures that benefit only the interests of a relative few.  Those interests can be tracked through the affiliations of the Board of Directors listed on the NASCO website.

In the context of these makeshift solutions, the reelection of Rick Perry as Governor of the State Texas was a key victory for US capitalism in the last election.  As the handpicked successor to George W. Bush in Texas, he presided over the implementation of the TTC (and the NAFTA supercorridor network), and during his second term he will push the program toward completion.

The political timing was perfect — the I-35 supercorridor is currently set to come out of the backcountry and make its public debut in southeast Austin where State Highway 71 will have to be bridged over the supercorridor motor traffic lanes and high-speed rail lines (which must run at grade level) that converge at that point.  The pylons for the 2-mile-long overpass are currently being erected in plain sight along the highway.

The NAFTA supercorridor program, like NAFTA itself, was developed in secret and sold through deception.  This time, however, we can see it coming — a huge juggernaut that is plowing its way through the countryside, spoiling the environment, consuming valuable farmland, destroying small towns, displacing hundreds of thousands of mostly poor people, and threatening to alter the economic and social infrastructure of the nation in undisclosed ways.

We were fooled with NAFTA.  At least this time we can see it coming — we just need to summon the courage to face it for what it really is.

(Author’s note:  Since the national media do not report on the NAFTA supercorridors, I would appreciate any local news about promotion and construction along the various corridor routes to keep my files updated.  Please send relevant information to irvogel@aim.com.)