Jane Fonda told the crowd at the January 27, 2007 demonstration in Washington DC that it had been 34 years since she had appeared at an anti-war demonstration, due to the lies told about her by the right wing.

It has been almost 38 years since my first DC demonstration, the great outpouring of November 15, 1969 that inspired then Vice-President Spiro Agnew to new heights of invective and caused then President Richard Nixon to claim that he ignored it all for a football game.

That November 1969 demonstration took place on a cold wintry day.  I traveled to it in a van driven by my youthful foreman at SS Pierce, where I was working in the warehouse.  I remember a long cold trip bundled up on the floor of the van with a bunch of other young people.  Thankfully, this latest action found itself on a break in the northeast’s winter cold snap, and the sun shone warmly on the demonstrators, many, me included, overdressed for the occasion. 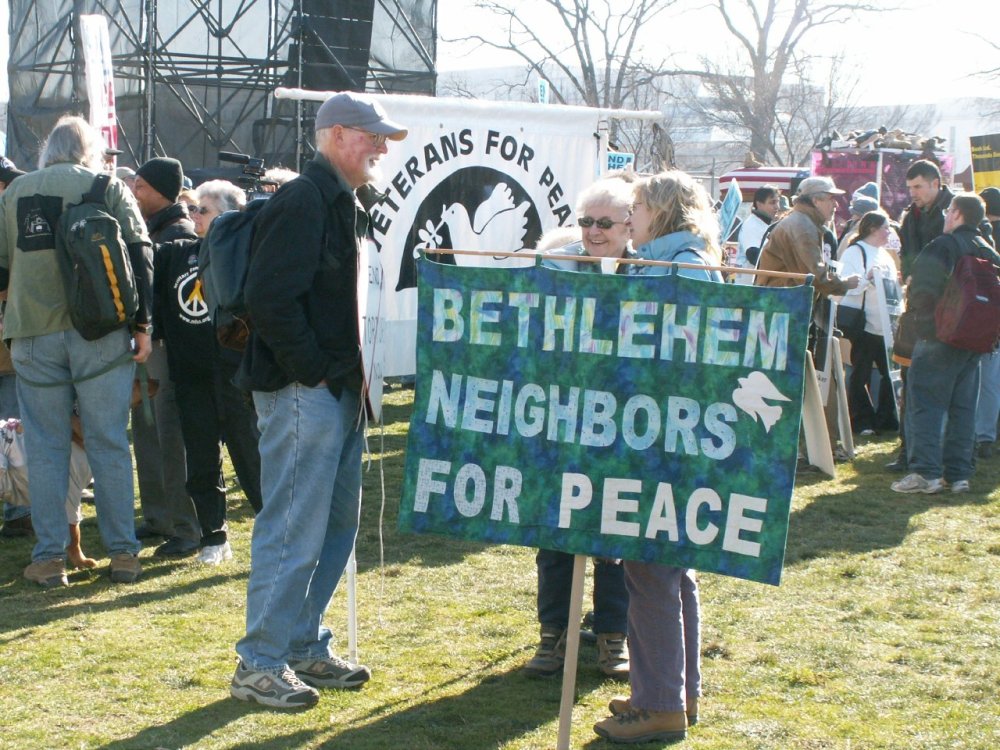 Since 1969 I have been to DC to oppose wars so many times that it becomes a blur of bus rides, car trips, station wagon drives, van rentals, and train trips.  This time, thanks to the hard and persistent work of our NY Capital District organizers of Bethlehem Neighbors for Peace, the trip was in a very nice Adirondack Trailways bus, with lots of legroom and working heaters.

What was unique about this mobilization?  It came, of course, right after the Bush Administration got a drubbing at the polls in a Congressional election dominated by the Iraq War, now increasingly seen as a disaster for the US.  Anti-war activists are keen to pour on the pressure to get Congress to stop funding for the war.  Our Albany, NY area Congressman, Michael McNulty, 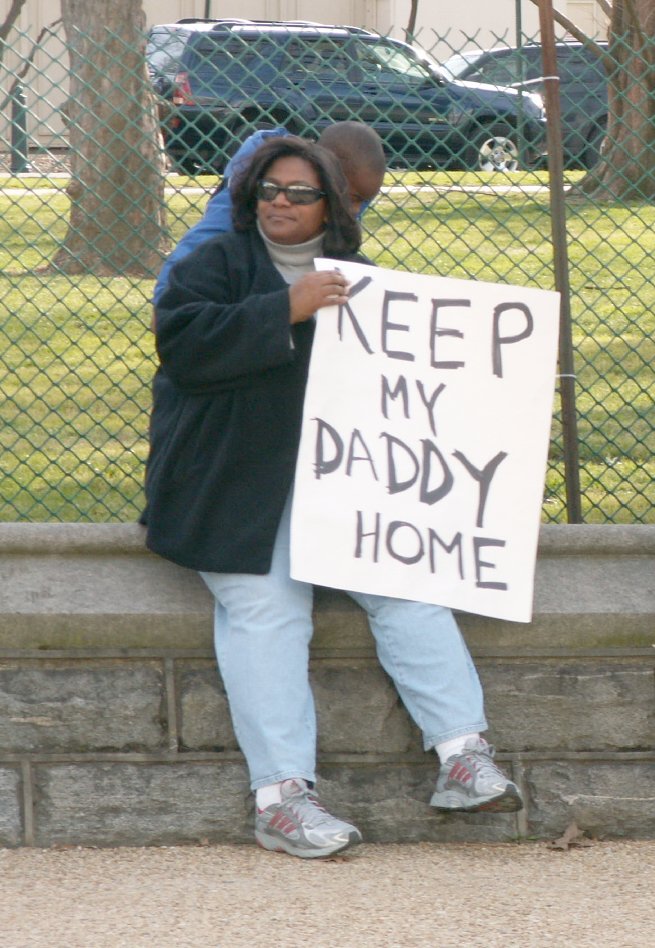 never known for his progressivism on the foreign policy front, recently appeared with local anti-war groups to announce that he will oppose further funding for the war.

Both from the demographics of my bus, and from the impression I got from walking around the Mall during the rally, the opposition to the Iraq war is beginning to attract more young people and ordinary working folks.

Trudy Quaif, the BNP organizer of the Albany buses, told me that student interest pouring in at the last minute was much more than the two buses reserved by BNP could accommodate.  Evidently, interest was so great in obtaining seats that calls came into Albany from far and wide, even as far away as Buffalo.

There was an organized trade union contingent, most prominently featuring the purple of SEIU.  But other unions were there as well, organized by US Labor Against the War. 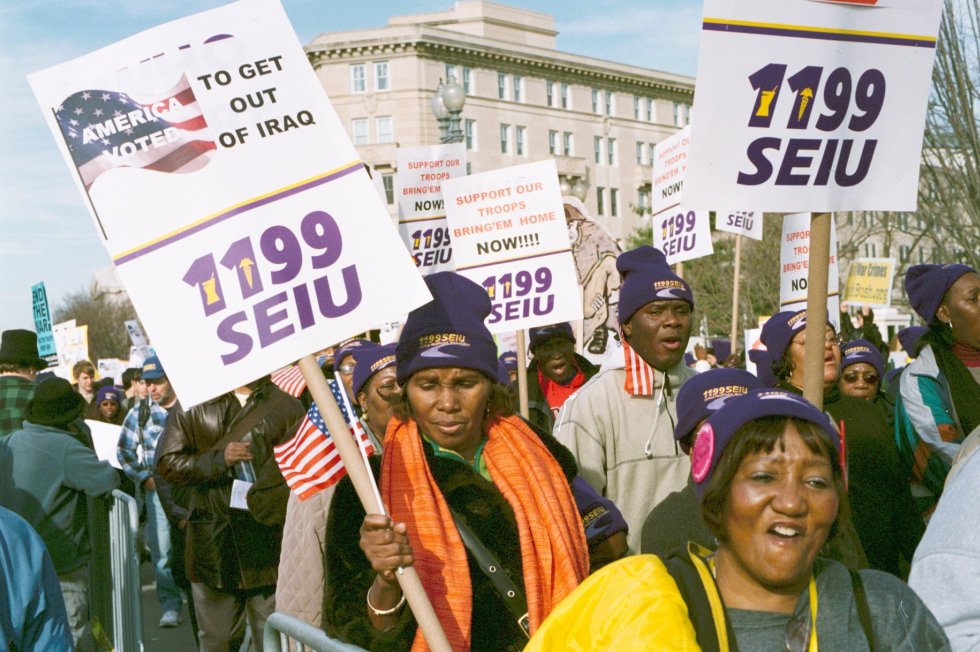 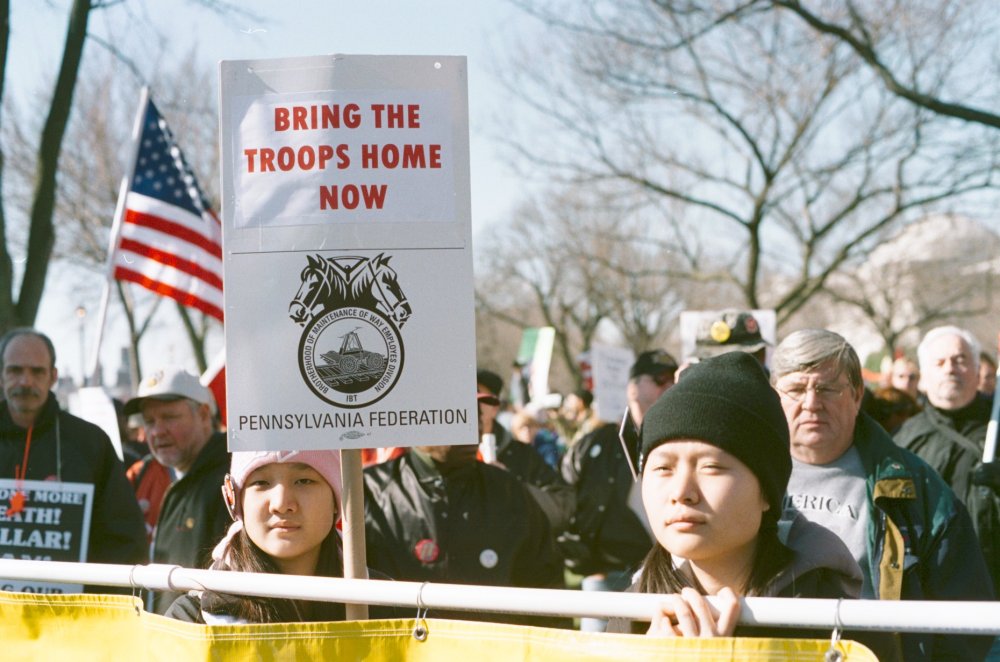 I spoke with Anthony Rochon, a vice chairman from the Pennsylvania Federation of the Brotherhood of Maintenance of Way (BMWE), another union whose presence in previous protests I had noticed. 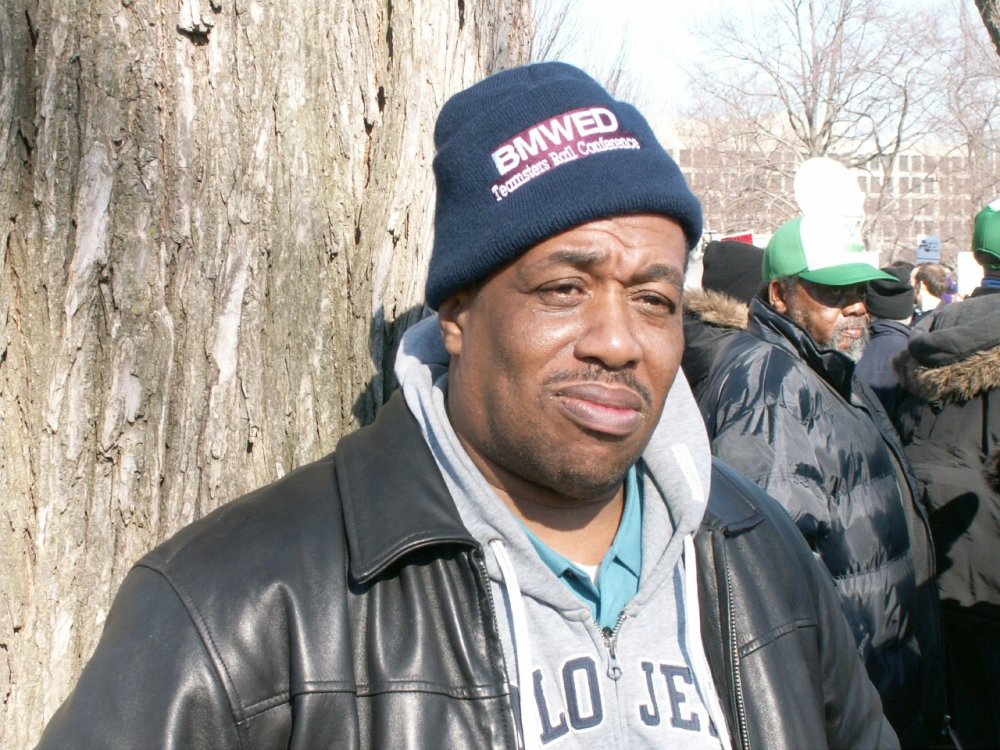 He told me that, like the rest of the country, the majority of the workers he represented opposed the war: “Our workers are still at the heart of blue-collar workers, basically we represent workers at Amtrak that have not had a contract for almost seven years now.  The climate of the working men and women of the union is such that they understand that something has gone tremendously wrong and they don’t trust the government and the leadership in Washington.”

After walking around the rally site for several hours, cameras in hand, I found myself at the beginning of the march, where I was able to squeeze off one shot of the activist celebrities heading up the march.

I also ran into two friends from the Capital District to march with.  The fact that the demonstration was large enough for me to lose most of the other Albany people I came down with was a good sign, I thought.

The march moved off towards the Capital, and before long we were walking behind the small but very spirited Iraq war veterans contingent, who quite rightly attracted lots of attention.  Their current petition for redress echoes a similar one almost 38 years ago, before the November 1969 demonstration, in which over 1,300 active duty GI’s appealed for support for the action and opposed the Vietnam War.  That was the first time in US history that such a protest had occurred. 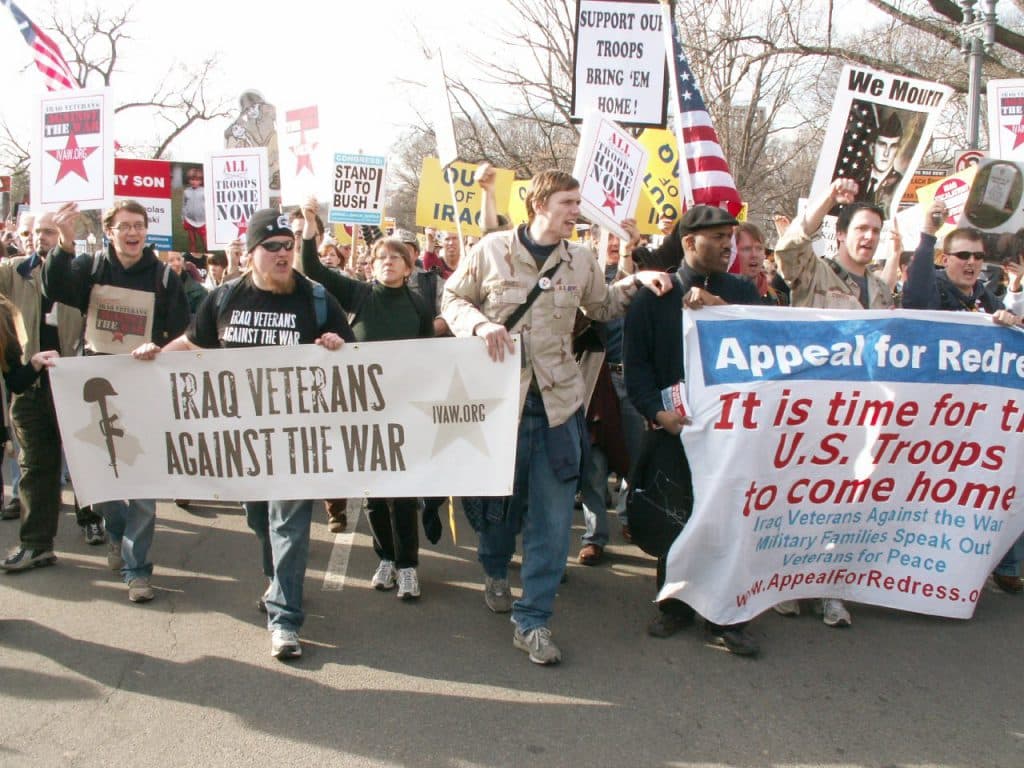 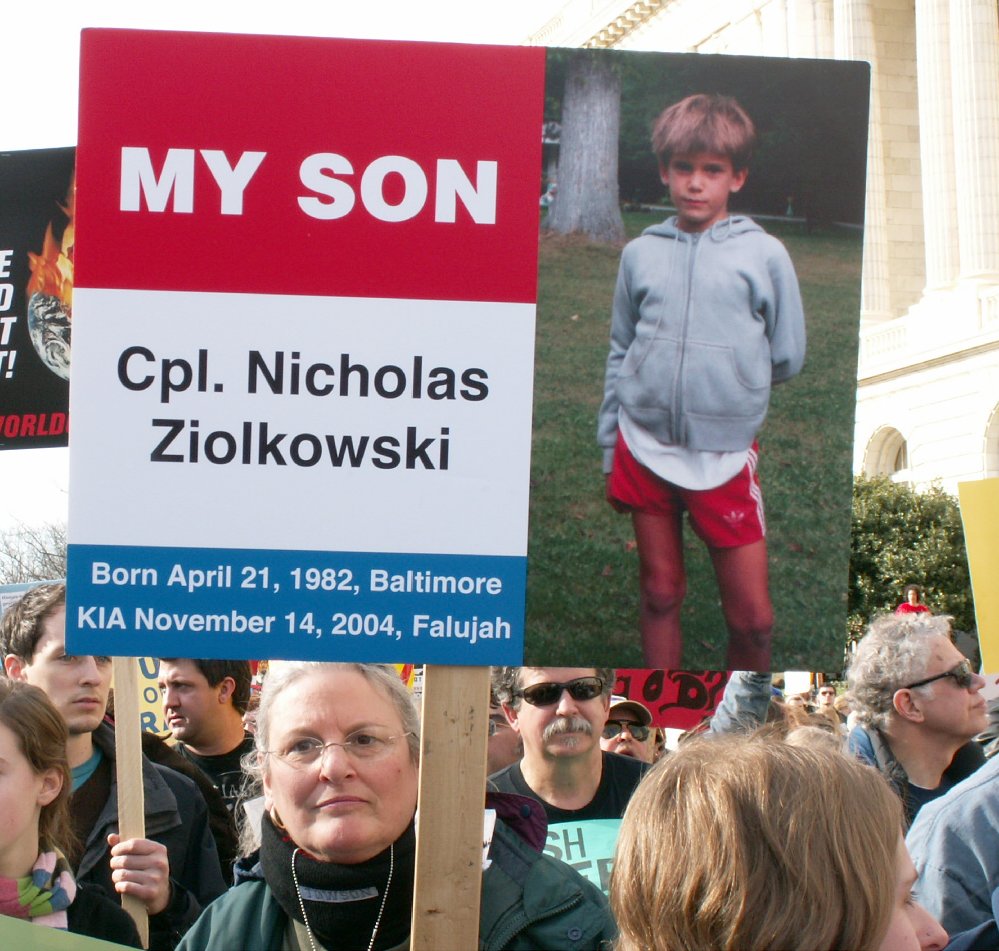 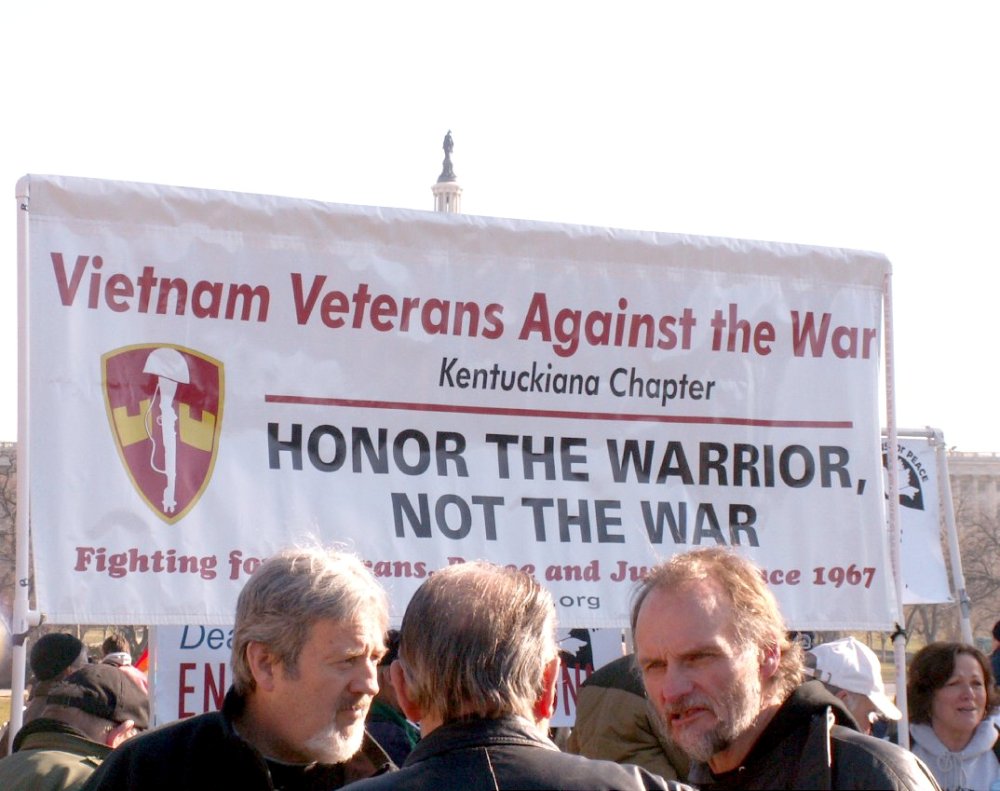 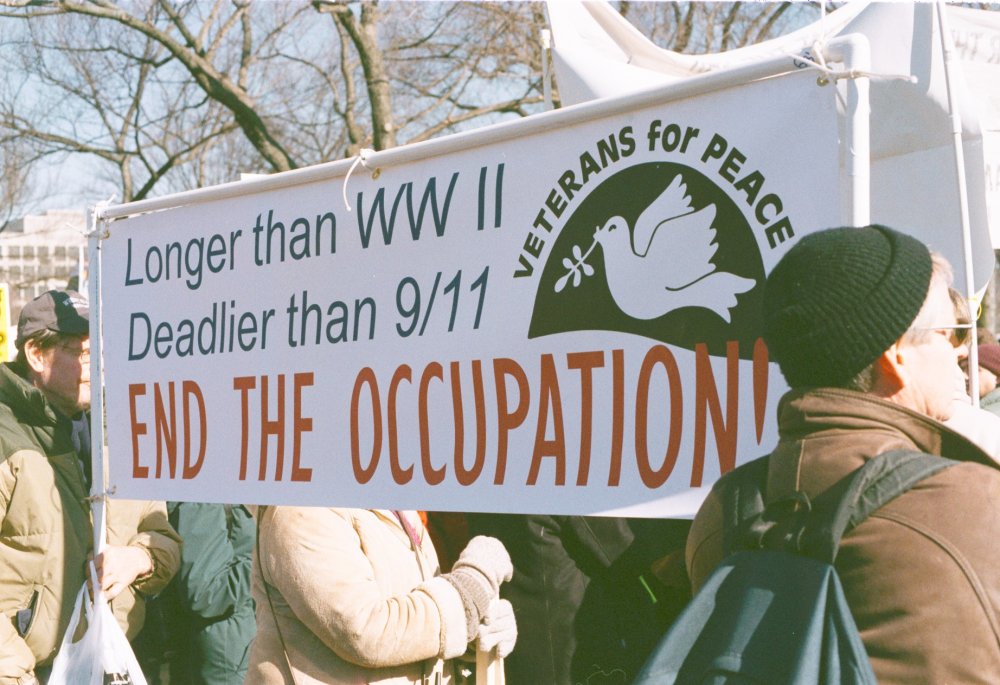 On the bus ride back to Albany, a young woman behind me started reading the CNN coverage of the demonstration off her web-enabled cell phone.  She was ecstatic that the story was number one for CNN.com.

Perhaps, much like the 1969 Vietnam protests, we can say that the anti-war movement has reached a turning point, which the ruling powers and their corporate media can no longer ignore.