War is dehumanizing.  By its very nature, it forces a coarse division between us and the other.  All the lofty ideals — be they revolutionary or reactionary — cannot change this.  Clint Eastwood‘s new movie Letters from Iwo Jima is a sobering and deeply humanist perspective on the horrors of war.  Relying on a well crafted script by Iris Yamashita and superb acting, the movie tells the story of a group of Japanese soldiers as they prepare for and eventually fight the Battle of Iwo Jima.  The movie is based on recently discovered letters by Japanese soldiers on the island and is told through the eyes of two of the letter writers, a poor conscripted baker, Saigo (Kazunari Ninomiya), and Lieutenant General Tadamichi Kuribayashi (Ken Watanabe), the Japanese general in charge of defending the island. 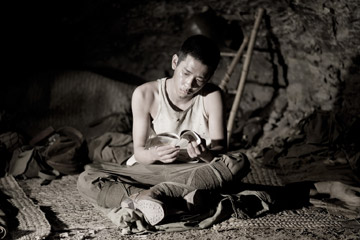 This film is political art at its best, it clandestinely transforms human perceptions and forces the viewer to think anew.  The beginning of the movie focuses on the minutiae that dominate the lives of all soldiers — bad food, dysentery outbreaks, and digging ditches.  Squarely in the tradition of great war writing like Orwell‘s essay “Looking Back on the Spanish Civil War” and Catch 22, these scenes serve both to humanize the soldiers and to communicate to the viewer the “essential horror of army life.”  In the words of Orwell: “Orders have to be obeyed and enforced by punishment if necessary, the relationship between officer and man has to be the relationship of superior and inferior.”

Letters illustrates cinema’s power to convey the truth of the other — in this case the Japanese soldier.  In doing so, it imparts new perspective on our own lives.  Movies are not made in a social vacuum — much like writing history, movie-making is a partisan project.  As Fredric Jameson has emphasized, the production of any cultural product — and I include both movies and histories in this category — is subject to underlying economic, political, and cultural realities of the society that produces them.  Can one imagine a Hollywood blockbuster made today that ends with the Klan gloriously “saving” Southern women from freed slaves like the 1915 classic Birth of a Nation?  War movies, as both historical artifact and cinema, are even more constrained by the societies that produce them than other genres of films.  Thus, it is not surprising that most Hollywood war films possess a common grammar: war is war as experienced by American soldiers; victories are American victories and losses American losses.

The rules of any grammar constrain what can and cannot be communicated.  Hollywood’s grammar is no exception.  Letters is striking precisely because it disregards Hollywood’s grammatical rules and, as a result, achieves a level of intellectual and emotional honesty about war rarely seen.  It is an American movie about an “American war” told through the eyes of the “enemy.”  As such we see the Battle of Iwo Jima without first filtering the images through the dulling lenses of nationalism and jingoism.  Iwo Jima is no longer just an American victory.  It is also a human tragedy.  Without the narcotic effects of “patriotism,” the suffering inflicted by war is more intense, the killing more gruesome, and the human costs more unbearable.

One of the most refreshing things about Letters is that it does not sugarcoat the extreme militarism of the Japanese.  There is no “Spielberging” here, people are not good or evil; there is no clear right and wrong.  Instead, there are only humans and the societies that shape them.  The tension between the militarism of the Japanese army and the humanity of the individual Japanese soldiers is a constant theme of Letters.  Eastwood uses this tension to examine the power of social institutions to shape our lives.  He seems to imply that what is most frightening about militarism is that it tips the dialectical relationship between individual and society completely in favor of the latter.  In war and fascism, there is little room for individual initiative.

When watching Letters, one cannot help but come away feeling saddened at the human impulse to kill and die for a socially “imagined” homeland.  We, especially those of us on the left, are horrified by the humanitarian toll of wars.  Letters forces us to confront the human costs of war without allowing recourse to the symbolic language used to justify war.  In the words of Orwell, “the laws of nature are not suspended for a ‘red’ army any more than for a ‘white’ one.  A louse is a louse and a bomb is a bomb, even . . . [if] . . . the cause you are fighting for happens to be just.”  I fear we on the left may be equally guilty of using symbols to downplay the human costs of war.  The labels we attach to wars often dictate our perceptions of them; revolutions and anti-colonial wars are heroic endeavors while imperial wars are unnecessary calamities.  After all, when I watch the FLN in The Battle of Algiers I see a heroic revolutionary war, not the suffering of ordinary people.  Is it simply that the language of revolution makes symbols of men, abstract martyrs of fathers and mothers? I have no answer.  That Letters from Iwo Jima inspires me to ask such questions is a tribute to Eastwood.

Pankaj Mehta is a post-doc in the biophysics group at Princeton.  Visit Mehta’s blog Mutual Information at http://plogp.blogspot.com.