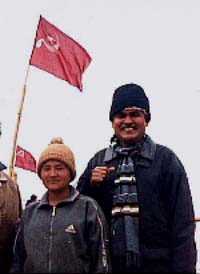 What were the main influences that led you to join the Maoist movement?

“I come from a peasant background.  I was studying in Phutan when I first came to know about the People’s War being led by the Maoists.  I was specially enthused by their objective of establishing a People’s Republic of Nepal and I got involved in the cultural front of the Party as an artist.  I had left home all by myself, but my friends helped.”

How did you come to join the PLA?

What was the response of your parents?

“My parents also belong to the same political tendency and so they accepted my decision to opt for the PLA.”

What was the first armed action that you were involved in?

When did you first get promoted?

Did any of the men have a problem being led by a woman?

In the feudal-patriarchal setting of Nepali society it would have been unimaginable for a woman to be commanding a group of men.  But the PLA, there were no problems.”

Have the men in the PLA learnt to reject sexism?

“I came to the PLA to escape from the clutches of the feudal-patriarchal values, attitudes and behaviour prevailing in Nepali society.  The women who joined the PLA have become quite competent over time.”

What if women in the PLA decide to have children?  What then?

“The Party is quite open about the idea of PLA women having children.  Women bring their babies to the camps and they are taken care of.”

What were the guerrilla operations that you were involved in?

What of the subsequent promotions?

What is the proportion of women in the PLA?

Was there any hesitation in promoting you because of gender?

“Promotion was determined by necessity and capability.  I do not feel I was ever discriminated against because of gender.”

Do women gradually drop out of the PLA and opt for other work in the movement?

“It is not very common for women to opt out of the PLA.  They value the freedom they get over here.  But there are some exceptions.”

If there were a process of democratisation of the joint army (after the merger with the Nepal Army), would you still want to pursue a professional career there?

“If the Party asks me to stay on as an officer, I will abide by the needs of the Party.”