American capitalism has been addicted to cheap Mexican labor since the U.S. conquest of Mexico in the nineteenth century.

The Border Industrialization Program, the bi-lateral treaty that granted U.S. industries almost unlimited access to Mexican labor along the U.S.-Mexico border in the 1960s, fed the addiction.  Following on the heels of the runaway shop movement that saw the migration of many U.S. industries from the heavily unionized Northeast and Midwest to the American South and Southwest and seeking to recapture the Bracero workforce that had been deported after the termination of that earlier program, the maquiladora manufacturing in Mexico was the next logical step of American capitalism.

In the 1990s, NAFTA provided the habit a huge booster shot by allowing U.S. and Canadian firms to penetrate the interior of the country.

Maquilapolis: City of Factories, a documentary film produced by filmmakers Vicky Funari and Serigo De La Torre in collaboration with the Tijuana women’s organization Grupo Factor X gives us a good look at how profoundly the maquiladoras have impacted the working people and environment of Mexico. 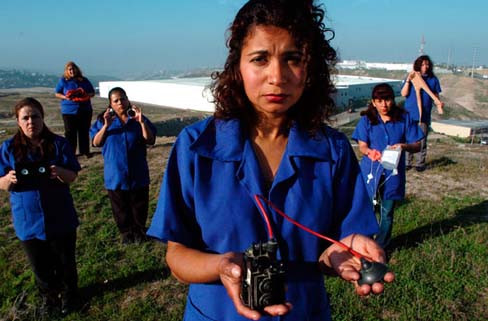 Tijuana is the Maquilapolis of the film.  Located behind one of the notorious modern Walls that separate the rich from the poor, the stable from the precarious, and connected to San Diego by the biggest international crossing in the world, Tijuana is truly a City of Factories.

The sweeping aerial views of the city presented in the film establish the setting of the drama below — the factories, acres upon acres of factories with their adjacent truck parks, dominate the tops of the mesas and tower over the colonias, the communities of the workers, many of them ramshackle squatter settlements scattered across the slopes of the hills and arroyos below.

The panoramic views of the city of factories are breathtaking, but it is the close-ups of the workers that quicken the heart of the narrative.  The Maquilapolis project put digital video cameras in the hands of women maquila workers and offered them a chance to tell their own stories.

The resulting documentary is remarkable.  While it offers a stark portrayal of the collective cost of unbridled capitalism on the lives of working people and their families and the local environment, it also tells an inspiring story of the struggle for justice and dignity.

The promotoras (the women activists of the colonias), while they have suffered the worst abuses of predatory capitalism, are clearly not its victims.  There is much to learn and admire in their stories.

Watching this film with an open mind brings the viewer very close to the struggle on the ground.  The collective narrative of these women suggests that the Tijuana Wall, tracked in the film from the desert hills to the east of the city and extending out into the Pacific Ocean, might not be long enough or tall enough to do what it was designed to do.

Much here depends on the reactions of viewers north of the border.

Richard D. Vogel is a political reporter who lives in Texas and monitors labor, immigration, and prison issues.  He is the author of “The NAFTA Corridors; Offshoring U.S. Transportation Jobs to Mexico” and “Transient Servitude: The U.S. Guest Worker Program for Exploiting Mexican and Central American Workers.”  Contact: irvogel@aim.com.