France’s presidential election results are deeply contradictory.  The victory for the “patronat” — the nation’s dominant big business community — may prove extremely dangerous in terms of an enemy reawakened by that victory.  The losses for the French left — which still retains the support of half the nation’s electorate — may provoke its return to the debate between reform and revolution under conditions strongly favoring the latter as its new policy.

Despite the issues of immigration, crime, and foreign policy that also figured in the election, the French election was remarkable — as has happened often since the French revolution of 1789 — in clearly demarcating the basic economic issues.  Once again, the key political divisions concerned capitalism and government policy toward capitalist enterprises.  In May 2007, the welfare state tradition in France — dating back at least to the popular front policies of Leon Blum in the 1930s — confronted perhaps its strongest political counterattack.  Given the Left’s inability to promote its message with anything like the resources provided to the Right by its business financiers, the resulting impact on French voters was hardly surprising.

Nicholas Sarkozy, the victor, mocked the accumulated socialist reforms imposed on capitalists in France — its showcase European welfare state — as hopelessly misguided.  Those reforms, he insisted, had caused the nation’s economic problems.  Perpetuating those reforms would mean continued failure to liberate capitalist growth and technical dynamism.  Only that liberation — often packaged as “modernizing” — could revive French economic progress; it would ensure, Sarkozy promised, sustainable prosperity.

Vote shifts by French workers who had formerly supported the Left made the difference.  They were, to say the least, dissatisfied with the economic conditions in France’s welfare state.  So they listened to the French Right’s heavily promoted argument that those conditions resulted from socialist reforms. 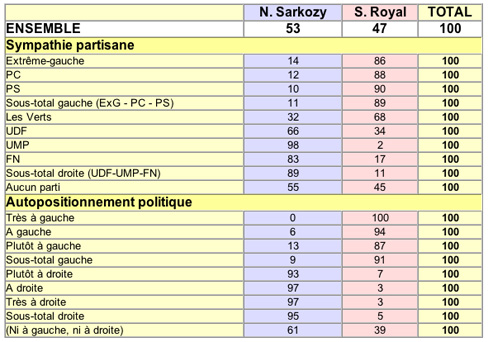 Relentlessly, France’s 35-hour work week and generous state welfare programs (5-week paid vacations, national medical care, secure pensions, subsidized childcare) were characterized as wasteful impediments to the economic revival that would flow from “freeing” capitalist entrepreneurship.  Removal of counterproductive reforms comprised the “modernization” that a global economy and the European Union required if France was to resume its prosperity, national power, and international prestige . The patronat successfully turned many French voters against the welfare state as no longer protecting them.  Those voters no longer supported the left parties who continued to endorse the welfare state.

The socialists split in their reaction to the Right’s attacks on the welfare state.  Division weakened them politically.  Some socialists accepted the Right’s arguments.  They too would “modernize” France but more gradually and with more care to protect French workers along the way.  This position effectively endorsed the Right’s view of the welfare state.  The other wing of the socialists stuck obstinately to the old reform programs and slogans and simply ignored widespread disaffection among constituents.  Many socialists — including the losing Presidential candidate, Ségolène Royal — combined (or vacillated between) both wings.  Such socialist ambivalence added to voter disaffection.

Do the French election results, then, represent a clear victory for the Right over the Left?  Yes and no.  Polling results and also my interviews with a cross-section of the French electorate suggest that Sarkozy’s triumph may induce major changes on the Left inside and perhaps outside France as well.  Undermining the welfare state may prove to be a short-term gain for capitalism achieved at the cost of a new Left that challenges capitalism far more profoundly than the welfare state and its leftist supporters ever did.

Sarkozy’s defeat of the socialists returns the French Left to the old issue of reform versus revolution.  Basically, since the Great Depression and through May 1968, the French Left has opted for reform rather than revolution in response to capitalism’s crises.  It reasoned that revolution would invite an overwhelming and effective crushing of the Left by the forces of “order.”  It doubted that workers would support a revolutionary program.  So the goals were kept within the framework of reforms.  Reforms would constrain capitalists in the surpluses they could appropriate from their workers and in what they could do with their surpluses to enhance their profits and competitive positions.  Reforms would return to the workers — in the form of government programs financed by corporate taxes — a portion of the surpluses they had produced for their employers.

The reforms of capitalism won by successive Lefts were accompanied by promises that those reforms would be secure.  Reforms were the payoff gained by foregoing the revolution.  Now it is clear that welfare state reforms neither were nor are secure. So long as the capitalists retain their positions as corporate boards of directors, they will have both the incentives and the means to undo reforms won by the socialists and social democrats in Europe, by the New Deal and later Democrats in the US, and by the comparable political formations across the world.

The Left proponents of a revolutionary policy against capitalism may now be able to defeat the reformists on the Left by arguing precisely that reforms won cannot be secure so long as capitalists endure.  If so, it will have been capitalism’s successful rollback of the welfare state that swings the balance within the Left from reform to revolution.  The demise of the reformist Left within the socialist, communist, Trotskyist, and other left parties and the emergence of a deeply and widely grounded revolutionary left alternative will then confront capitalism with perhaps the greatest challenge in its history.